Something strange is happening at night on the frozen bottom of the world. An unknown phenomenon is causing the frozen landscape of Antarctica to shake up to thousands of times a night. What is causing these mysterious ice quakes?

Like most things in Antarctica, this seismic activity still remains largely unexplained and the geological forces at work under the Antarctic continent still aren’t well understood - although we all likely understand with a subtle horror that any unknown and worrisome natural phenomenon likely stems from the same incessant cause: climate change. In many ways, our whole understanding of Antarctica is based on our observations of a rapidly shifting landscape, since modern anthropogenic climate change started in the industrial age just as explorers and scientists were beginning to reach the southernmost continent. 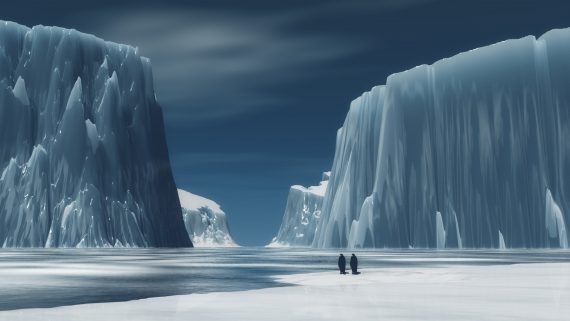 Nevertheless, scientists from the University of Chicago have been using networks of seismometers spread miles apart on the Antarctic ice sheet to try to understand what exactly is happening below the ice and better understand how the Antarctic ice sheet is melting. While mapping seismic activity in the ice, the scientists observed the ice come ‘alive’ each night with hundreds to thousands of tiny ice quakes lasting less than a second. While ice quakes are a known phenomenon, the perfectly nocturnal cycle of these quakes is anomalous.

Naturally, this mysterious phenomenon is thought to be linked to melting polar ice caps. In a press release, University of Chicago glaciologist Douglas MacAyeal says the ice quakes likely stem from the cyclical melting and freezing of ice on the surface, a process which strains the ice below:

In these ponds, there’s often a layer of ice on top of melted water below, like you see with a lake that’s only frozen on top. As the temperature cools at night, the ice on the top contracts, and the water below expands as it undergoes freezing. This warps the top lid, until it finally breaks with a snap.

The Antarctic landscape is truly an almost living system, undergoing cyclical and constant change due to the incredible geological and meteorological forces it encounters. As our planet appears to be undergoing a period of climate stress, these glaciers and the ice quakes they experience may be yet one more way to quantify and measure our impending self-wrought doom.

Just what we need.