Ryan Sprague is a lead investigator and co-host of the CW television series, Roswell: Mysteries Decoded and the author of Somewhere in the Skies: A Human Approach to an Alien Phenomenon. He is also the creator and host of the Somewhere in the Skies podcast on the eOne Podcast network. As a UFO journalist, Ryan has interviewed witnesses from all walks of life about UFO sightings and encounters. He has also interviewed military and intelligence officials about UFOs, writing for such news sites as Open Minds Magazine, Rogue Planet, Omni Reboot, and Futurism. Speaking on the UFO topic, he has been featured on ABC News, Fox News, Science Channel, and is a regular on Travel Channel's series, Mysteries at the Museum. He is currently working on his second book.

Here, Ryan talks to me about what he has and hasn't learned from his years in a field that can be inspiring and maddening in equal measure... 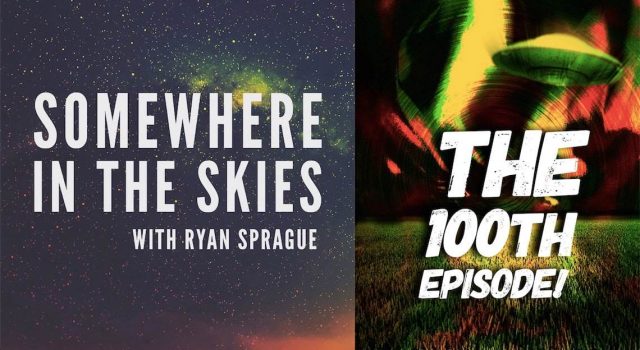 RG: Your podcast recently celebrated its 100th episode. Is it a challenge to deliver quality content every week? How do you select your topics?

It’s definitely challenging, but the reward far outweighs the challenge. I get messages from listeners from all over the world almost on a daily basis. Some good, some bad, but almost always constructive. I value my listeners’ opinions because, ultimately, the show is for them and not for me. My goal was to shake things up with the show; ask new questions of the UFO phenomenon. So, I wanted to bring unique voices to the UFO discourse. I’ve met so many new people and have learned so much from simply stepping outside the echo chamber.

RG: What inspires you most about UFOlogy?

The staggering amount of people who have witnessed the phenomena firsthand. Also, the attention that “Ufology” has gotten these past few years (yes, no matter what anyone says, To the Stars Academy has played a huge part in that). The topic is certainly seeing a resurgence, and even mainstream scientists and academics are taking it more seriously. I need not look further than at least three college/university-level professors who now teach UFOs in their curriculum. The conversation is growing both in terms of how many people are interested and even in the complexity of the phenomena.

RG: What annoys you most about UFOlogy?

The divide. There’s room for everyone at the saucer-shaped table, so instead of talking down to one another, in terms of research, approaches, or beliefs, we should engage in healthy debate, take what we want from one another's work, and build off of it. I’ve personally gleaned something from every person I’ve talked to about UFOs, even if it involved me learning that someone was straight up lying to my face, hoaxing, or simply a fantasist. At least I learned to move on from them and focus on the work at hand.

RG: Who are your top three UFOlogical heroes or role models, and why?

The first would have to be my mentor, both in UFO research and my other passion in life, theater. And that is Peter Robbins. He welcomed me with open arms into a world I never knew existed. He is a man of many words and those words pack a punch. We spend hours at our favorite diner in Manhattan, chatting about UFOs, the theater world, and everything in between. They’ve been some of my most memorable moments of living in New York City for the last decade or so, and I wouldn’t trade them for anything.

My second UFO hero would have to be Cheryl Costa. Her dedication and resilience continue to marvel me. She created the most comprehensive reference book on UFOs ever written, and I know her work has only just begun. While I focus my research on individuals and stories, she enhances witness testimony with hard data. It’s a task that not many could wrap their head around, let alone put in to such a comprehensive format for the public at large. Lest we forget, she had a very credible and serious interview about UFOs in the New York Times prior to the Secret Pentagon UFO Program story broke.  Costa remains one of the most important researchers this field has ever had.

Stanton T. Friedman would be my final choice. The time he has dedicated to unraveling the UFO mystery is beyond commendable. He has paved the way for so many of us. His contributions to individual cases, to the field, and to the topic overall, are undeniable, and he remains one of the most level-headed, eloquent, and damn nicest people this field has ever produced.

RG: What is your own personal goal in this field? Do you have a vision for what you’d like to accomplish?

My goal is and always has been the same: to make the topic of UFOs accessible to younger people and to legitimize it in any way I can. If I find answers along the way, that’s great. But I’m more interested in the journey than the destination. And that journey has opened my eyes, my mind, and my perspective on this mystery, and so many others. It’s a very personal journey, but I also really enjoy picking up hitchhikers along the way!

RG: Some scholars have suggested that UFOlogy, or the UFO subculture, has clear religious aspects. Do you see any parallels between the pursuit of UFOs and the pursuit of God?

Absolutely. I often look at the work of Carl Jung when it comes to this intersectionality. He once stated, “By ‘self,’ we mean psychic wholeness, but what realities underlie this concept we do not know… in religious experience man comes face to face with a psychically overwhelming Other.” To me, this means that belief strengthens faith and vice versa. And a huge part of the UFO phenomenon also involves belief. But when it comes to staring up at that UFO, we each bring something truly unique and powerful to the interpretation of what we’re experiencing. In religion, we perceive a divine being as something all powerful and we give it meaning beyond that which we know to be true. We often do this with UFOs as well. We do not know what they are or what they represent entirely, but we give it meaning according to our own life experiences. They are so intrinsically linked, that perhaps we are, as many have contemplated, looking at a modern myth—a technological AND spiritual modern-day religion. I strongly urge all those interested in UFOs to read the recent offering by Diana Walsh Pasulka. After interviewing her on the podcast and reading her book, American Cosmic, I think she’s on to something groundbreaking and revelatory. 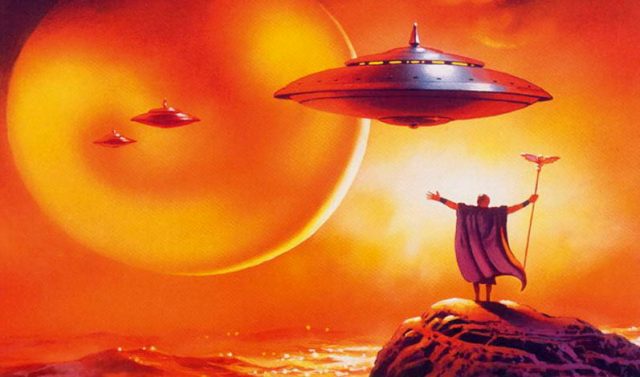 RG: There are many hypotheses to account for the UFO enigma, including man-made secret technologies, exotic natural phenomena, mass hallucination and delusion, and, of course, extraterrestrial intelligences. Which theory do you feel is most credible, and why?

This may sound non-committal, but I honestly believe it to be all of these and none of these. The more I look in to UFO phenomena, the more I’m convinced we are not dealing with simple nuts-and-bolts saucers from another planet. The phenomenon is deeply malleable and it is ever-evolving. Some UFOs are most definitely man-made and natural phenomena. Some “UFO flaps” could easily be mass hysteria while some could have been an invasion on a miniature scale. Each of the theories has some merit in my eyes because I’m still stumbling my way through all this, just like everyone else. The one thing I can say to anyone out there who may just be dipping their toes in the UFO waters is this: if anyone claims to have a single definitive answer to the UFO phenomena, run. Run as fast as you can and don’t look back. Look forward to those who are still theorizing. We are on the timetable of the phenomena. Always have been. Probably always will be.

RG: You’ve been studying UFOs for a significant portion of your life; do you feel you’re any closer to understanding the phenomena today than you were, say, 10 years ago? Where do you see the UFO field 10 years from now?

My sobering answer is no. I don’t think I’m any closer, but I do think I’ve personally made great strides in understanding certain cases, incidents, and how to conduct my own research. If I could go back ten years, I'd tell myself to be more patient and more empathetic. I think my lack of knowledge early on led me to cast judgment very quickly on certain cases. And now, almost a decade later, I am realizing that things aren’t always as they seem. Some cases have become more credible for me and some have unfortunately been cast in to bowels of hoaxes, fabrications, or misidentifications. I was extremely skeptical when I first started out. I've definitely become more open to the phenomena and those experiencing it. In ten years’ time, I hope we have a convergence of science and witness testimony, where both can be satisfied with some semblance of an answer to all this. 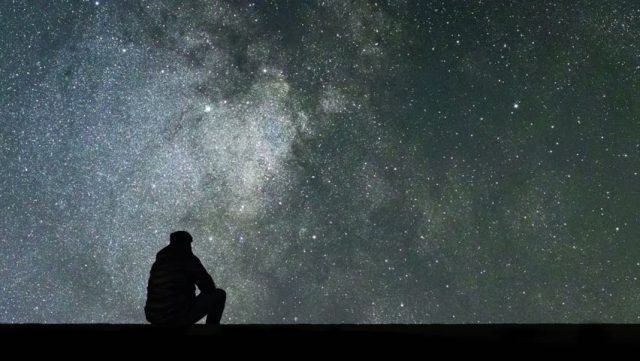 RG: What’s next for you? What other projects are in the pipeline?

Right now, I’m working on some television projects with the wonderful people I worked with on Roswell: Mysteries Decoded. Let’s just say that our investigation into this seventy-two year old case isn’t over. And there are plenty of more mysteries we hope to decode in the very near future. Other than that, the podcast continues weekly, along with my Youtube channel. And I am working on a follow-up book that takes me places I’ve never been before, both with UFOs and possibly interconnected phenomena. It’s a challenge and a journey I’ve set for myself, and one I hope people will want to join me in along the way. Expect my book some time in 2020. I also have some speaking engagements coming up, including Alien Con in Los Angeles! More info on all of my projects and the podcast and book can be found at www.somewhereintheskies.com