The Bizarre Case of the Ohio River Octoman

There are always those cases of mysterious creatures that seem to go beyond the bizarre to become truly entrenched within some otherworldly realm unto itself. These are the cases for which there is no clear answer and which remain just as eyebrow-raising as they are completely unique and indefinable. I have quite a habit of searching out accounts such as these, and one very strange such case comes to us from the U.S. state of Ohio, where for a brief period there was a spate of sightings of some sort of octopod humanoid from beyond the fringes of our understanding.

In the winter of 1959 a very strange visitor from some goblin realm of the bizarre reportedly made an appearance near the town of New Richmond, Ohio, in the United States. In January of that year, police received a report from a panicked man who had been walking along the Ohio River when he said he’d spotted something of an octopod nature emerge from the murky water, which he claimed was indescribable and totally not of this earth. There were no further details and it remained simply an anonymous and anomalous report that caused authorities to just sort of shrug their shoulders, but soon more reports of something very weird in the area began to come in, all orbiting the same time frame.

The second call was from a truck driver who had been on his way to Cincinnati when he had a rather surreal encounter at the Little Miami River at around the same general time as the original report. The driver also claimed that the creature was “indescribable,” saying “I have never seen anything like it before.” Police were called to the area but were unable to find anything out of the ordinary, and it was beginning to sound like some sort of hoax, but the calls had both been made by distinctly different people in two different areas on the same night. Nevertheless the case began to pick up some traction when it was featured in the Cincinnati Post & Times-Star, in the rather spectacularly titled What Is It? ‘Monster’ Churns Up the Ohio. More reports began to come in, and it seemed that on that night all of the street lamps along Kellogg Ave. had spontaneously and mysteriously gone out, the reason for which remains unknown. In one newspaper report it was written of the whole situation:

Reported sightings of the “monster” at various points flowed in Friday to police of Cincinnati. New Richmond, Clermont and Hamilton Counties. Hamilton County officers spent two hours chasing ghosts along the Ohio and Little Miami rivers. Street lights went out in parts of Eastern Cincinnati about the same time adding to the eeriness. But the Cincinnati Gas and Electric Co. says it was a power failure caused by high winds.

That may be so, but police claimed that the lights were on two different circuits, making winds seem unlikely as a culprit. There were also found no broken poles in the area at all, making it all the more inexplicable. It certainly wasn’t high winds behind the weird sighting called in by an unidentified witness who says he also had seen the beast on the same evening while crossing the Licking River. As he crossed a bridge over the water, he said that a horrific hulking beast had leapt out of the water up onto the road in front of him and that he had seen it very clearly. The man would explain:

It was large, not a dog or a cat. It leaped in front of my car and on two legs and was taller than the auto. When I looked back in my mirror, it was moving along the bridge rail. It was three or four times the size of a man and much bulkier. I have an eye and mind for dimensions and I know it was huge.

At this point it was still unclear just what the monstrosity actually looked like, but this would soon be rectified when a woman in Kentucky claimed she had also seen it in a creek near the Ohio River at the Fort Thomas pumping station, and that it was “like an octopus.” Not long after this another woman called in with her own report, saying that she had seen it hunched over by the Ohio River, and gave a remarkably detailed description of it, saying, "It was a strange, grayish creature with a lopsided chest, ugly tentacles, and rolls of fat running horizontally over a bald head.” 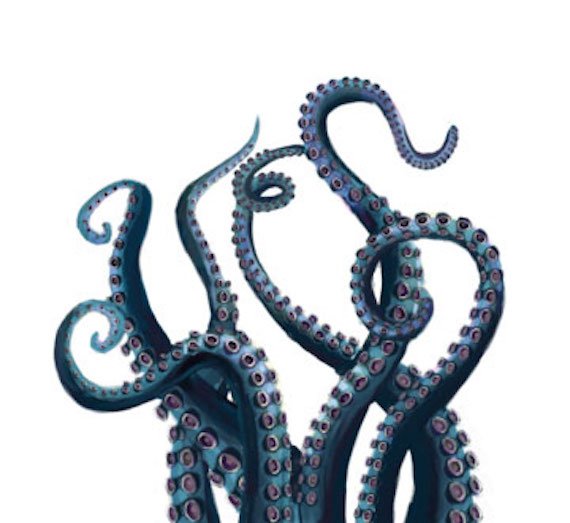 What in the world? In the meantime, the persistent and quite sensational news reports were sending the area into somewhat of a mass hysteria, with rumors whispered about that it was the beginning of an alien invasion and armed groups of men roaming about the waterfront on the lookout for the creature. There were a lot of theories passed around on what it could be, ranging from that it was an alien or some undiscovered mystery monster, to that it was just a piece of driftwood floating down the river, but the witnesses were sure that they had seen something strange beyond rational explanation. All things told, at least five unrelated people would report seeing the mysterious octopod beast at around the same time. As the speculation ran rampant, the sightings just sort of evaporated and were forgotten, the monster slipping back to wherever it had come from, and one newspaper report would sum it up:

What was it that five (or possibly six) apparently unrelated observers saw in the wee hours of that icy winter’s eve? Where did this thing come from? And perhaps most intriguingly, why has it never been seen either before or since?

Why, indeed. It seems the whole thing might have remained forgotten and gathering dust forever if it had not been for the paranormal investigator Dennis Pilchis, who unearthed the reports and published them in the 1978 booklet Bigfoot: Tales of Unexplained Creatures. These reports are pretty much all we have to go on, and we are left with a baffling case that doesn’t seem to have any clear answer in sight. What were these people seeing? Was it an alien? Was this some sort of amphibious cryptid? Could it have perhaps been some sort of inter-dimensional interloper that somehow managed to cross over into our reality for a time before phasing back out? Or was it all just overactive imaginations and driftwood? If it was some sort of outlandish entity then where did it come from and where did it go? The bizarre case of the “Indescribable Octoman,” as it had often been called, remains one of those head-scratching paranormal cases that appear from nowhere and evaporate just as fast, going on to become forgotten features of the landscape of Forteana that defy clear classification.