The Bizarre Tale of the Winchester Mystery House

In the 1800s there were few names as widely known as that of Winchester, of the famous gun manufacturer the Winchester Repeating Arms Co., which carried the name of the family who had built an empire out of weapons and made a fortune off the blood of others. When the big man himself, Will Winchester, died of tuberculosis in 1881 he left behind his wife, Sarah Winchester and a vast fortune. Sarah would inherit a large portion of this fortune, as well as half ownership of the massive gun company her husband had helped build and it looked as if she had nothing to worry about ever again, instantly becoming one of the richest, most powerful women in the country at the time. No one probably could have predicted the odd turn her life would take from then on, which would spiral into one of the weirdest houses there is.

Following the death of her husband, Sarah was in a state of deep mourning, having never quite gotten over the death of her infant daughter some years before in 1866, and it was perhaps this despondency and misery that guided her in what she would do next. She suddenly left behind her entire life in New Haven, Connecticut, taking her substantial money and relocating to the other side of the country to start a new life in California. At San Jose, then a rather rural hamlet, she in 1884 purchased a rather modest (for her) and unassuming eight-room farm house on 44 acres of land covered in quaint apricot and olive orchards. She quickly became known as an eccentric recluse, eternally dressed in a long, stifling black outfit of mourning even in the sweltering California heat and rarely talking to anyone, but she would soon become more well-known known for her odd obsession with ceaselessly building and reforming her home in a bizarre renovation project that would span the next few decades and the rest of Sarah Winchester’s odd life.

Sixteen carpenters and numerous construction workers were brought in to work on building and redesigning the house nonstop, 24 hours a day, 365 days a year, and very little of it made any sense. Hundreds of rooms were added, many for no reason or discernible purpose, windows stuck in odd places, numerous fireplaces built, towers, stairways that led nowhere, countless passageways, and thousands of doors, some that open onto nothing at all such as walls, dead ends, or steep drops outside, a cabinet that extends through 30 rooms, and numerous other oddities. Some rooms held smaller rooms within them, others have balconies on the inside, trapdoors lead to nowhere and staircases switched back and forth for no reason or which lead directly to the ceiling. To make it all even weirder was that the designs and plans were constantly changed without notice, with structures torn down before they were even finished to be rebuilt or whole rooms plastered over, and sometimes Sarah would suddenly deliver brand new plans scrawled on pieces of paper by hand at a moment’s notice to the baffled carpenters.

This haphazard construction went on day after day, and no expense was spared. There was extensive indoor plumbing and hot running water, both pretty big luxuries in the day, as well as three elevators, a high-tech heating system, and the most expensive stained glass windows that money could buy, even if they sometimes merely overlooked a wall or nothing at all. There were also opulent silver and gold chandeliers, countless paintings, the most lavish furniture, and even an elaborate and very expensive push button gas light system. The entirety of the house was also constructed of redwood, which oddly Sarah insisted on, only to always paint over it with stain and fake grain because she didn’t like the hue. The endless, rambling, aimless, and very quirky construction of the luxurious house drew a great amount of media attention at the time, with gawkers coming to look at the architectural anomaly and speculate on just why it was being done in the first place. Considering that Sarah wouldn’t talk about it with anyone and that the construction workers were tightlipped and refused to speak with reporters, no one had the slightest idea of what had spawned this continuously growing, sprawling estate.

In the void of any real answers rumors and hearsay swirled. One of the most popular theories then and now is that Sarah Winchester had felt great guilt over the deaths that had been caused by her company’s products. She supposedly became convinced that she was somehow cursed, haunted by the vengeful ghosts of the Winchester firearm victims, and a spirit medium was rumored to have told her to move west and begin her project, saying that only with nonstop building would these restless spirits be appeased. According to this tale, she really believed that if the home was ever completed then she would be doomed, and so building went on and on, with no end in sight, much of it designed to confuse the ghosts and with her going so far as to sleep in a different room every night to baffle these nefarious wraiths. This rumor was bolstered by the stories of nightly séances being held in one of the house towers, as well as many ghosts seen on the premises. In fact, Sarah was claimed to have actually divined the plans for the house from contact with spirits, scrawling them down to pass to the carpenters. It is a popular legend surrounding the house, but no one actually has any idea whether any of it is true or not, and indeed we still don’t know exactly why she did what she did.

As rumors roared about the construction continued on, only stopping briefly in 1906, when the great San Francisco earthquake partially demolished it and caused some areas to be closed off entirely. This constantly changing, evolving and devolving, never-ending, obsessive construction continued on until Sarah died there in 1922, and by that time it would sport 160 rooms spread out over 24,000 square feet, 13 bathrooms, 40 bedrooms, 2 ballrooms, 3 elevators, 2 basements, 47 fireplaces, although there are only 17 actual chimneys, 6 kitchens, 10,000 windows, 2,000 doors, and innumerable trapdoors, maze-like passages, and staircases and fixtures, with new forgotten rooms, cubbyholes, and secret passageways built over and occasionally uncovered right up into the modern day. Throughout it all are cryptic engravings, inscriptions, and occult symbols hidden within, and it is all quite perplexing. At the time this place was the largest private residence in the country, and all of it had a big question mark hanging over it, the only one who knew the answers having taken them to the grave with her.

After Sarah Winchester's death the entire estate was inherited by her niece, who ended up auctioning it off because its off-kilter design and the sheer absurdity and insanity of its layout made it fairly worthless for the average buyer. It would be bought and opened for public display in 1923, and the mysteries only continued from there. Secret attics and rooms are sometimes turned up and there is a rumor that a hidden treasure lies buried somewhere within its walls. Yet even stranger are the stories that the place is haunted. Apparitions, disembodied voices, cold spots, visitors being tapped or nudged by unseen hands, you name the paranormal activity and the Winchester house probably has it. 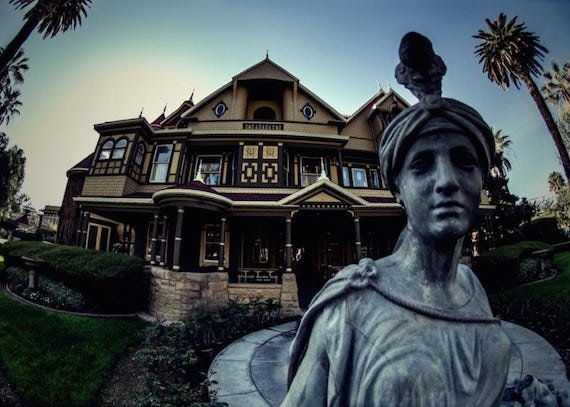 Tales of the hauntings famously attracted the attention of the great magician Harry Houdini, who came to debunk it all as an illusion caused by the building's surreal design, and came away not quite sure what to think. In the 1990s there was also an extensive month-long paranormal investigation carried out here by parapsychologist Christopher Chacon, that according to him supposedly scientifically documented a variety of unexplained phenomena. Whether real or not, stories of hauntings at what is now known as “The Winchester Mystery House” have continued right up to the present, just more secrets among many to be found here.

However, perhaps even more mysterious than any ghosts or paranormal phenomena is Sarah Winchester herself. Even now it is not known just what compelled her to go on her decades long crusade to build this odd monstrosity or what drove her to her deeply eccentric ways. She never talked about it with anyone, didn’t keep any journals, and her family has never spoken of it. What possessed her to build this outlandish place? Was it really all to appease and confuse the ghosts she was sure were plaguing her? Was this commanded by spirits from beyond the realm of our understanding? Or was it just the bizarre hobby of a troubled, lonely, and very rich eccentric? We will probably never know, but in the meantime the house, which sits upon the National Register of Historic Places, has been the subject of a recent movie called Winchester, starring Helen Mirren, and is open to public tours, so the next time you are in the San Jose area maybe check it out and see what you think, and do tell me if you see any ghosts while you are there.

Remembering Dan Blankenship and the Mysterious Treasures of Oak Island