Besides the many disappearances on record of people, other things seem to go missing all of the time, and sometimes there is no real logical solution to it all. From ships, to planes, to nuclear weapons, it sometimes seems that pretty much anything can go missing at a moment's notice. One very intriguing mystery of modern times is that time a WWII-era bomber went crashing into a river to never be seen again, leaving us scratching our heads all the way up to the present.

It was the year 1956, right in the middle of the Cold War, with the populace of the United states living with a constant mist of fear and tensions between the United States and the Soviets running high. It was during this climate of simmering aggression that on January 31 a B-25 Mitchell bomber took off from Nellis Air Force Base in Nevada on its way to Olmstead Air Force Base in Harrisburg, PA, along with six crew members on what is thought to have been a routine training flight. Things went smoothly during the first portion of the cross country flight, with the plane making scheduled refueling stops at Tinker Air Force Base in Oklahoma and Selfridge Air Force Base in Michigan, and there was no reason to suspect at the time that there was anything amiss at all. Indeed, it would have been a picture prefect run if it weren’t for what would happen next.

As the massive behemoth of a plane roared over the landscape that at around 4 AM Maj. William Dotson radioed in to report that they had run dangerously low on fuel and were also experiencing an engine malfunction. The fuel situation was apparently dire enough that Dotson was forced to make an emergency decision, flying low over the Monongahela River near Pittsburgh, Pennsylvania, buzzing the Homestead High Level Bridge and attempting to gently put the limping plane down in the water near the Glenwood Bridge in Hays. It must have been quite a startling sight for the civilians that took in this spectacle, this big WWII era bomber thundering down over the bridge to go splashing down into the river, and the plane was sturdy enough that it did not break apart.

All six of the crew members initially survived, and rescue efforts were immediately launched to fish them out of the river, but they were on borrowed time as the freezing waters threatened to kill the survivors as their mortally wounded aircraft rapidly sank. Of the six who had made it through the landing, only four would come out of that frigid water alive, with Capt. Jean Ingraham and Staff Sgt. Walter Soocey drowning after a bid to swim to shore. After retrieving the men, the Coast Guard tried to save the plane, but it sank down into the depths and was lost. Oddly, when the Coast Guard and the Army Corps of Engineers continued the search for the missing plane over the next 2 weeks, dredging the bottom extensively, but they were unable to locate it, and indeed the mysterious B-52 has not been seen since, nor indeed any trace of it, as if it had been swallowed up by the river itself.

Herein lies the main thrust of the mystery. How does a whole B-25 Mitchell bomber, which measures 52 feet long, nearly 17 feet tall and has a wingspan of 67 feet, just go missing in a river? Andrew Masich, of Pittsburgh’s Heinz History Center, an organization helping to search for the missing B-25, has said, “There is nothing logical about losing a 15-foot plane in a 20-foot river.” After all, this is not the deep sea out in the middle of the ocean, but rather a mere 20 to 30 feet of water, so how is it that not even a scrap of it has ever been recovered, despite many even more modern attempts to find it with everything from divers to advanced sonar equipment? Well, this depends a lot on who you ask, and there have been countless conspiracy theories as to the ultimate fate of the bomber, running the full spectrum from the rational to the absurd.

One very pervasive theory is that the plane had been not on a training mission at all, but rather had been carrying some very important top secret cargo, and that the military secretly came on to retrieve the plane and whisk it away. There were several witnesses who came forward in the days after the crash with uncorroborated reports claiming to have seen a mysterious black barge at the site carrying divers in black suits, or even a truck carrying the wreckage away, which seems to support this opinion. A tugboat captain who had helped with search efforts also came forward to claim he had seen a barge carrying the plane off down the river, and would claim that he had been warned by an unidentified caller not to say a word. One of these witnesses spoke of the area crawling with the military shortly after the crash, saying:

Hundreds of soldiers descended to the crash site and closed the river. They guarded the banks of the river while barges came in and pulled the bomber to the surface. The plane was then offloaded to railroad cars, where it was taken to one of the local steel mills and melted down.

In another report a man claiming to work at an Air Force Base in Dayton, Ohio, said that the wreckage had been brought there, and there were several witnesses who claimed that there had been a 7th or even 8th man aboard the plane, who had been wearing uniforms without insignias. What this theoretical cargo could have been and why the military would want to cover it all up is anyone’s guess, but ideas have included that is was some dangerous biological agent, some deadly chemical or nerve agent, a nuclear weapon, spies, or even a UFO or alien bodies, which is a favorite of the tinfoil hat wearing crowd considering that the plane had been coming from Area 51 territory and Nellis Air Force Base, in itself ground zero for conspiracy theories of all kinds. The tense climate and paranoia of the era only made the rumors and speculation worse, but in the end no one really knows what was on that plane and it could have been carrying the Lost Ark of the Covenant for all we know. 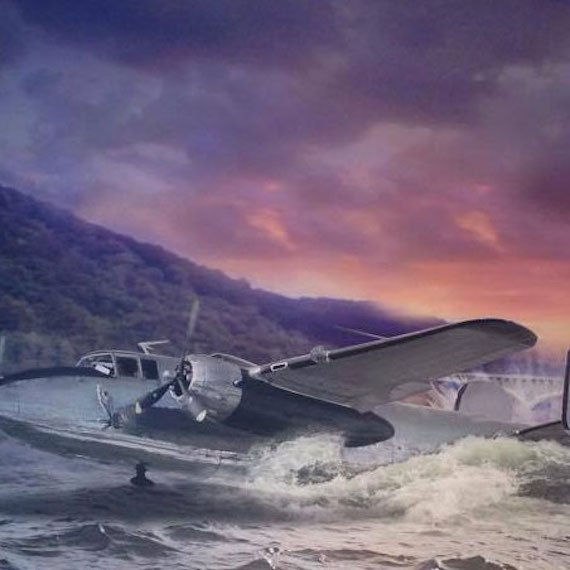 Others believe that the missing bomber is still out there in the river, although its location has never been found despite the crash area being well-delineated and there having been hundreds of witnesses to the crash and the sinking. One idea has been that the plane fell into a hole or gravel pit on the bottom of the river which effectively swallowed and concealed it as silt covered the remains. This may be true, but the fact is that no one has managed to locate it despite numerous searches by various organizations and private individuals who have used cutting edge sonar equipment and underwater mapping equipment to scan the entire area. Even if the plane is still down there somewhere there is probably not much left of it, as the highly polluted water serves to quickly corrode and dissolve any metal left here for any appreciable length of time. Bob Shema, Operations Director for The B-25 Recovery Group, a private organization dedicated to finding the wreckage, has said of this:

We expect to find the engine blocks, landing gear and tires - they were all made to be bulletproof, but the rest of the plane – doubtful. You couldn't keep an outboard motor in the water all year - the propeller would be dissolved in no time. All the aluminum [of the plane] is expected to be gone, except what may have come in contact with the bottom.

Whether the lost plane is there somewhere or not, it is remarkable that something so big could go missing so completely in such a confined area, and the search and discussions go on. What happened to this plane? Where did it go? Was it whisked away by the government and covered up, and if so why and what could have been such a precious cargo to make that necessary? Is it still at the bottom of the river, and if so how has it managed to remain so elusive even in the face of ongoing concerted efforts to find it? Wherever the answers to these answers may lie, the mystery of the “Ghost Bomber” of Pittsburgh has remained an intriguing enigma still much discussed and debated today.

Olivia Newton-John Claims That She Is Frequently Visited By Ghosts