It’s getting harder and harder to separate the alien spacecrafts and extraterrestrial orbs from the meteors, the secret military tests, the usual flares and Chinese lanterns and all of the other bright and unusual objects increasingly crowding our nighttime and even daytime skies. The latest example occurred this week in the air over Los Angeles on the night of the third and final supermoon of 2019 when thousands witnessed bright objects streaking across the sky that behaved nothing like the ones Californians are used to seeing, even without the aid of mind-altering substances. They became even more suspicious when officials quickly called their reports “bull.” Cover-up?

“A mysterious streak of light in the Los Angeles sky sent the imaginations of many onlookers over the moon.”

ABC News, along with other national, local, international and Internet news organizations were quick to report on the incident which occurred as night darkness approached on March 20. SyFyWire’s science writer and astronomer Phil Plait began receiving accounts and videos from the less imaginative wondering if the wandering fireballs were drunken meteors and, at first glance, Plait agreed.

“Apparently quite the meteor show over LA tonight! Looks like it skimmed through the upper atmosphere but I'm guessing. Waiting for more footage. It's LA. There'll be more footage.”

Those with better imaginations or better zoom lenses suspected flying humanoids, and it turns out they were closer to the truth. Tired of all of the emergency calls, the LA police and fire departments issued similar explanations.

“PSA: A meteor did not crash into Downtown Los Angeles, and no, it's not an alien invasion...just a film shoot. This is Tinseltown after all.”

Were Los Angelenos witnessing the opening shots or battle scenes of the long-rumored Independence Day 3 sequel? If so, they will be disappointed, not just because a few measly little flaming humanoids would not be much of a blockbuster-worthy invasion but because this wasn’t a theatrical shoot but a commercial one. And yes, the elected officials who said “Bull!” were, for a change, telling the truth.

"As the third and final supermoon of 2019 rose over the iconic Los Angles skyline, the Red Bull Air Force – a team assembled from the most accomplished and experienced skydivers in the world – marked the occasion as only they can: springing into the air to get an up close and personal look at the phenomenon." 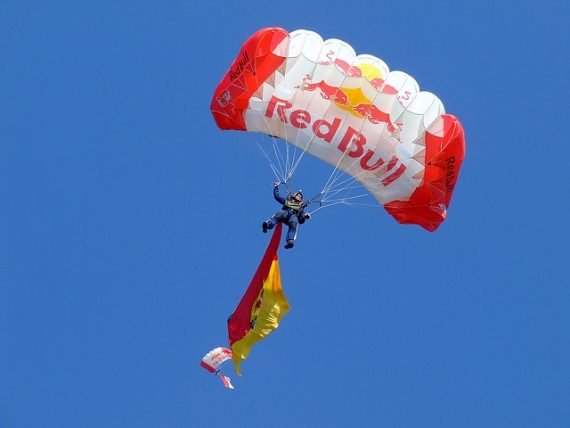 Really? An energy drink promotion? Do we really need another “War of the Worlds” panic, a Phoenix Lights confusion, a Great Los Angeles Air Raid cover-up or a death-defying stunt just to sell more of a product that is already ubiquitous? Did it have to be tied to a supermoon – another over-hyped natural phenomenon that did not portend the apocalypse, much less an alien invasion, a new movie or an old product? Have we regressed from Mulder’s “I want to believe” back to Groucho’s “Who are you going to believe, me or your own eyes?”

Are we really becoming this gullible? This fearful? This enslaved to advertising?