UFOs have always been paradoxical -- viewed from the corridors of power as a tangible national security concern warranting decades of secret investigations, they  are also frustratingly impalpable cultural artifacts. As real phenomena, they continue to flit in and out of our perception, sometimes profoundly affecting individual lives. Meanwhile, they permeate our culture as iconographic entertainment products. UFOs are real, and they are unreal. This dichotomy demands some focused attention.

The literary critic and philosopher Walter Benjamin saw in the cinematic medium a “unique faculty to express by natural means and with incomparable persuasiveness all that is fairylike, marvelous, supernatural.” Benjamin died in 1940, seven years prior to the birth of the modern UFO phenomenon. Had he lived to experience the age of the flying saucer, and of saucer movies, his observation would likely have been extended to include the “alien.”

The transcendent, actualizing power of cinema has been similarly noted by the artist Valie Export, who suggests that films are “expansions of our structures of time and space, of our experiential structures... they are expansions of our reality and our independent consciousness.” Through cinema, says Export, “the past is made visible, space and time can be transported... the boundaries between artificial and natural reality, between actual and possible reality... between man and object are transcended.” 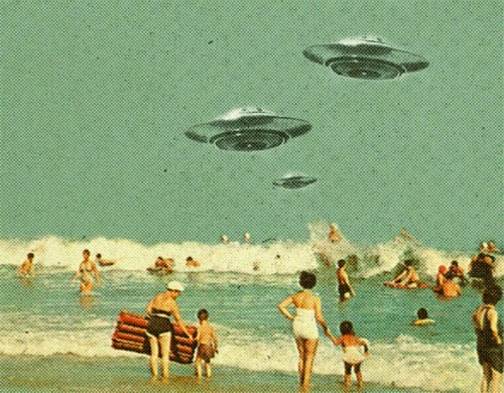 The spectacle and the hyperreal

The social theorist Guy Debord spoke of the "spectacular society," in which “the real world changes into simple images... and the simple images become real.”  In our spectacular society, said Debord, “the image matters more than the object, in fact, much more so than mere objective truth.” The image replaces the truth – it is truth, it is reality. The resultant state, in postmodern theory, is "hyperreality."

By its most popular definition, hyperreality is:

An inability of consciousness to distinguish reality from a simulation of reality, especially in technologically advanced postmodern societies... [it is] a condition in which what is real and what is fiction are seamlessly blended together so that there is no clear distinction between where one ends and the other begins.

Something that is hyperreal, then, is simultaneously real and unreal, fact and fantasy. 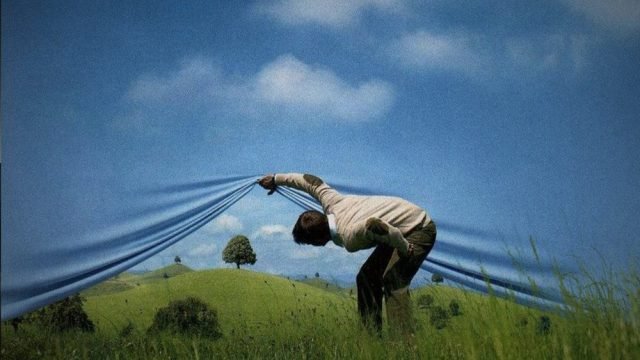 The key words in the above definition are “technologically advanced.” Technologies of reproduction (mechanical and digital) have ushered in the age of the hyperreal, an age where simulations of reality threaten to dissolve the boundaries between "fact" and "fantasy," between "true" and "false," "real" and "imaginary." It is my contention that cinematic simulations of UFOlogical history have all but consumed the history itself through the process of replication, just as humans were consumed and replicated as pod people in genre classics such as Invasion of the Body Snatchers (1956) or John Carpenter’s The Thing (1982).

The power of cinema

Cinema has an essential mystical ability to completely detach us from our physical environment and transport us to another, more vivid, realm of perception; a realm where everything is at once illusory, yet strangely real.

In film studies, anything that exists within the world of the film is known as diegesis. The cinema screen separates their fictional world from our "real" world. But, actually, the diegesis seeps through the screen into our world, into our subconscious. It becomes part of our reality. 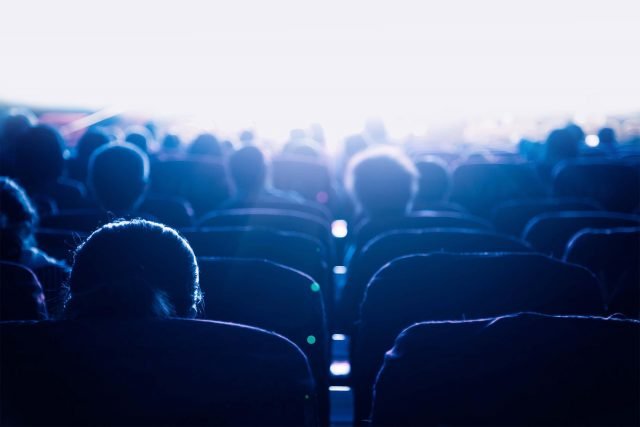 Key to cinema’s power is that movies, in their slick, neatly packaged, self-contained way, serve to narrativize and contextualize the events, debates, and processes that constitute our frustratingly non-narrative world. Life rarely makes sense, but movies usually do, and in that we take comfort and, therein lies the problem: movies, no matter how realistic they are in the events they depict, are not real life. They are, at best, reflections of our reality, snapshots of it, simulations of it, skewed and distorted through the ideological framework of those who have made them.

Movies masquerade as the final word on a given topic. No matter what the subject, and regardless of how much that subject has already been written about and debated, once it is committed to film – once it has received the full Hollywood treatment – it is embedded firmly and forever into the popular consciousness. Imprinted on our psyche. Plunged into the deep wells of memory and imagination.

Unidentified Flying Objects are "real," which is to say they exist independently of cinema, and of pop-culture more broadly. UFOs have been investigated by governments around the world for seven decades. What the phenomenon represents is open for debate, and various theories have been propounded, from secret military aircraft, to natural phenomena, otherworldly intelligences, and even untapped human potential. The point is that even in a world without movies, people would continue to report UFOs. People were reporting UFOs, and flying saucers specifically, long before Hollywood got in on the act.

UFOlogy informs Hollywood more than Hollywood informs UFOlogy, which is to say that Hollywood engages with UFO lore in a parasitic fashion, sucking dry the pulsing veins of a seventy year old subculture. The industry grabs hold of fringe ideas and popularizes them through the science-fiction genre: Men in Black, Close Encounters of the Third Kind, The Fourth Kind, Area 51. Hollywood didn’t create these terms, they were all part of the common language of UFOlogy decades before Hollywood lifted them.

In Hollywood’s UFO movies, broadly speaking, art imitates life. If the opposite were true, then following the release of James Cameron’s Avatar,  the highest grossing film of all time, we might reasonably have expected thousands of people to have begun reporting ten-foot-tall blue aliens. This did not happen; just as Hollywood’s forceful projection of the ‘little green men’ meme has failed to result in mass sightings of little green men (although reports of such entities do lightly pepper the UFO literature). 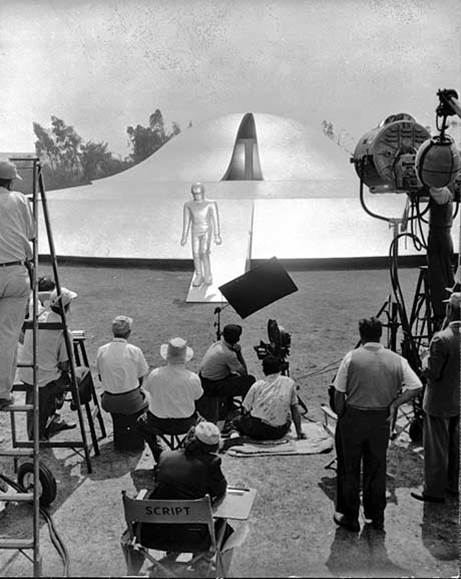 When it comes to UFOs, Hollywood produces depictions, albeit not entirely faithful ones, of what people actually report. This is not to say that what’s reported is necessarily true or accurate, but merely that Hollywood sees dramatic potential in these reports.

My position is this: Hollywood draws extensively from fact-based discourse on UFOs – a phenomenon whose existence is already rejected by consensus reality. The presentation of this UFO discourse onscreen -- and particularly within the context of the sci-fi genre -- serves to blur the boundaries between UFO fact and fantasy.

UFOs and the hyperreal process

Cinematic simulations of UFOlogical history (UFO movies and TV shows) simultaneously actualize and fictionalize their underlying subject matter – it becomes hyperreal, both real and unreal. We can unpack this concept into what I consider to be the three phases of UFOlogical hyperreality:

In which a film or TV show is produced that reflects a basic UFOlogical reality.

In which the basic UFOlogical reality is screened as spectacle for mass consumption, and, in the process, is masked and perverted through the cultural value of the medium (in this case film or TV, but we could also extend it to video games, comic books, etc.).

In which reality and simulation are experienced as without difference, or rather, the image has come to mean more to us than any underlying reality.

Essentially, then, the hyperreality of the UFO phenomenon has arisen primarily through processes of mass media simulation. The blurring of true and false, real and imaginary, through that most magical of mediums (cinema), and within the context of that most fantastical of genres (science fiction), engenders our acceptance of the UFO as just that: a fictional media construct with little or no grounding in our lived historical reality. And yet, thanks to their permanent residency in the popular imagination, UFOs are no less real to us as a result.

It boils down to this...

In our hyperreal world, a world where Roswell is better understood as a plot device and Area 51 is a tourist attraction – a UFOlogical Disneyland – debates surrounding official "Disclosure" of UFO reality (whatever that reality might be) are meaningless. How does one Disclose what is already hyper-real? The hyperreality of the UFO phenomenon in the popular imagination nullifies its potential to be either real or unreal, because it is now, and perhaps always will be, both.

Of course, this hyperreality model does not offer a solution to the UFO enigma, because it does not address what UFOs are at an ontological level. But it does, I believe, go a very long way towards explaining why UFOs continue to defy acceptance within our consensus reality.

And so, again, if you care about UFOs, you should care a great deal about UFO movies. They have shaped your perceptions of the phenomenon, often without conscious intent, but sometimes wilfully. With this in mind, when next we encounter a silver screen saucer, let us all take a moment to peer up from our popcorn, and to separate the fact from the fantasy. We can but try.

A Mysterious Death, a Spy, and a Duffel Bag