Lake Travis was born in 1937, when the Mansfield Dam, originally called Marshall Ford, was built by the Lower Colorado River Authority (LCRA) at Austin, Texas, for the purpose of controlling floods and providing a water source for the community, and the dam itself is a hydroelectric power plant that generates power for a good portion of central Texas. The lake itself is 18,622 acres and has a maximum depth of 190 feet, and it is known for its lack of sandy beaches, rocky banks, steep cliffs, and bluffs, and its nudist beach, called Hippie Hollow. The dam holds Lake Austin on one side, and Lake Travis on the other, and they are both reservoirs more than an actual lakes, but this has not stopped the stories of strangeness orbiting Lake Travis, and although very obscure, reports of monsters and other weird things have come in from here over the years.

The star of the show is a lake monster said to inhabit the lake, who is sometimes affectionately called “Ole Hippie.” The description of the mysterious beast varies, with some saying it looks like a huge fish and others saying it has more of an appearance keeping in line with the classic Nessie image, but whatever it is seems to be out of place in a manmade reservoir. One witness said of her encounter:

We have been swimming (before we knew better) and we saw a BIG “thing” cut through the water near us, it looked like a guy in a wetsuit, only big. My husband guesses it was a giant garfish. There are some of those & also giant catfish in there. It made us think twice about the safety of this lake. I don’t think other lakes are like this.

There have been plenty of other sightings as well. One witness says he saw it as he was fishing out on his boat in 2009 when he spied something very odd moving about in the water around 200 yards away from his little boat at approximately 8 AM. The creature is described as being around 50 feet long and moving fast, and the witness says:

The water was just murky enough that I couldn’t make out any features, and it had to be 20 feet below me, but it was moving slowly and then sped up and took a sharp right and then took off like you wouldn’t believe. In my 20 years of fishing on Lake Travis, I’ve never seen anything like this. My wife thinks I started drinking early in the morning, but let me tell you that I didn’t have a drop of alcohol until after this sighting. There’s something in that lake.

The creature has become a sort of running joke in the area, where it is often mentioned tongue in cheek, but there are nevertheless plenty of sightings of something strange here in the lake. In another account on Texas Cryptid Hunter, a witness claims that he saw something resembling a giant snake in the lake in 2003 as he was fishing there. He says:

In 2003 I was fishing, (alone of course), on Lake Travis and saw a large snake crawl from one point of a cove to the other. Now I have been hunting for over 44 years and have been fishing much longer than that. I have seen beaver, nutria, deer, coyotes, bobcats, dogs, cats (yes, cats), goats, sheep, mules, horses....etc, ad nauseum, swimming in rivers and lakes before. This was a big snake. Head about the size of both my fists. It stopped several times, picked its head up from the water about a foot, and looked around. I guess it was worried about the boats on the lake racing by. Watched it crawl from one bank, starting in a few inches of water, and swim to the other, where it disappeared in a large tangle of tree roots and brush. Never saw it again. Told my neighbor and my fishing buddy but of course I just got the old, "Look who has been drinking too much." look and smile.

Besides giant snakes, there have also been reports of outsized alligators lurking in the muddy waters here, with the rumor being that they are the result of escaped or released exotic pets and some of the reports mention true behemoths mearuring 10 feet and up gliding through the lake. While no truly enormous specimens have been confirmed, there have actually been 5 foot long alligators found in the lake in the past, and in 2011 a fisherman found a dead alligator on the shore measuring 6 feet long, apparently killed by a boat propellor. How exactly these gators got there in the first place is anyone’s guess, but they are certainly not native to the area. 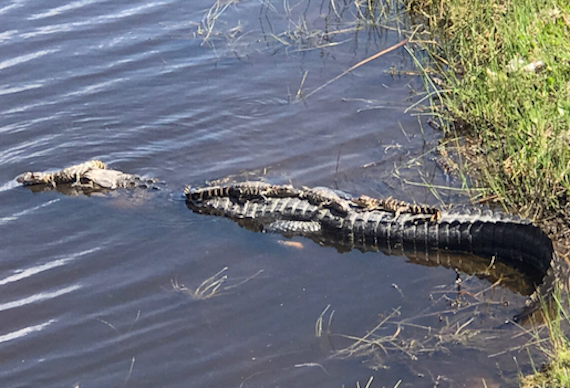 Could the tales of the Lake Travis monster have their origins in some sort of large snake or alligator? Or is it something else? It is worth noting that the lake is absolutely full of catfish, some of which are known to reach enormous sizes, with the record for the lake being a 54.78 lb. flathead catfish caught by T. Bennet Sansom in 2007. There are of course unconfirmed tales of ones even bigger than this, and there have been reports of divers encountering catfish down there as big as cars, leading to speculation that these monsters have had something to do with the inordinate amount of drownings and disappearances that occur here, with around 20 such incidents within the last 5 years alone. It more likely has to do with the steep drops, currents, and the extremely murky water here, but who knows?

Even odder than a lake monster in the water is what was captured in a photograph in 2007 by a a college biology professor. The witness claims that he was merely testing out the flash on his camera when he captured what appears to be some sort of humanoid monstrosity on film. It is hard to know what to make of it, but it has been much discussed online as being everything from a ghost, to Bigfoot, to a hoax. What do you think the photo shows?

Adding to the weirdness of the lake is a recent report from August of 2018, when boaters on Lake Travis claimed they saw a rod shaped UFO go soaring over the lake at high speeds. The witnesses gave a report to the Mutual UFO Network (MUFON), and claim that they did not see the object at the time, but rather noticed it later when they looked through video they had taken. What does this photo show?

Lake monsters, giant snakes, alligators, humanoids, and UFOs. Although it might be a backwater, little known area, Lake Travis seems to have drawn some unusual and relatively obscure accounts to itself. What is going on at this place? Whatever it is, if you are ever in the area make sure you keep your eyes to the water and the skies. It seems like you never know what you might see.