When Pasteur Meets Sabina: Exploring the Shamanic Interpretations for Addiction and Other Illnesses

It's 2019 and the world is disappointingly different than what 12-year-old me was expecting of 'the future' in the 80's. We haven't sent any manned missions to Mars --or even returned to the Moon for that matter-- and open contact with alien civilizations hasn't taken place (what kid is not a diehard nuts-and-bolters, I ask you?); nuclear fusion is still 50 years away, the rise of intelligent robots is now something to be feared, hoverboards are as plausible as a lightsaber, and although flying cars don't seem that far-fetched anymore, by the time they get here only Elon Musk and Jeff Bezos will be able to afford them --12-year-old me should have definitely spent more time learning to code, instead of just playing Karateka on our family's Apple IIe.

But that doesn't mean we're not going through an historic paradigm change at the moment, my dear Coppertops. It's only that the current cultural change is looking into the teachings of the past instead of the failed promises of the future, and it involves a word my 12-year-old self had probably never heard of it: Shamanism. 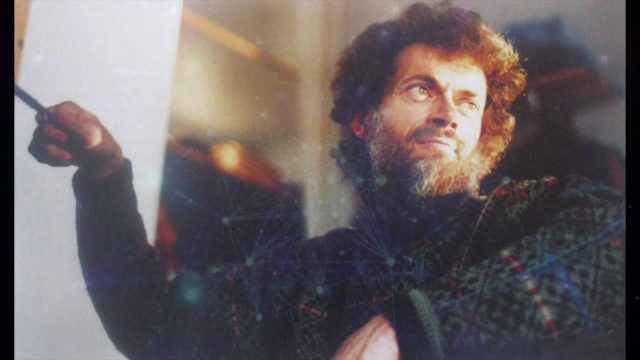 We can see the hallmarks of the new 'Shamanistic Revival' everywhere we look: The popularity of Terence McKenna's video clips on Youtube; the rise of 'shamanic tourism' to countries like Peru and Brazil, fueled by disenchanted Millennials seeking guidance and healing through the use of ancestral medicines like Ayahuasca; the slow legalization of once-satanized drugs like marijuana, MDMA and even ketamine, which is on the brink of being released as a new antidepressant --ah, if only John Lilly were alive to witness it! Maybe now the world would not look down on jerking off dolphins for science, as it did a few decades ago…

Yes, it looks like the flower children will get the last laugh after all, by way of outliving the people who criminalized psychedelics for fear of the instability they could bring upon frail social structures; not to mention the heroic work of people like Rick Doblin, head of the Multidisciplinary Association for Psychedelic Studies (MAPS), who have been jumping through all the hoops and red tape the DEA and FDA have thrown into their path, in order to gather the scientific data necessary to prove the medicinal and therapeutic value of psychedelics in the treatment of post-traumatic stress, depression, rehabilitation of inmates, and improving the quality of life among terminal patients by easing their fears of death.

But in order to reap the benefits of these ancestral medicines, do we need to embrace the worldview of the cultures from which they come from, or do we simply incorporate them into our reductionist/materialist interpretation of the physical body, viewing them as powerful tools for rewiring the pathways of the brain?

Such are the questions that popped up inside my own brain when I was listening to this fascinating conversation between Dr. Christopher Ryan (author of the New York Times bestseller Sex at Dawn) and James Fadiman, one of the OGs psychedelic pioneers and the godfather of the modern 'Microdosing' movement. Kyle Thiermann, a world-famous surfer and podcaster, joined Chris and Jim in the conversation, which covered all sorts of topics and episodes in Fadiman's career as an academic researcher and psychedelic guide --he was a protegé of Richard Alpert before he became Ram Dass, a close friend of Timothy Leary and led a creativity study in Menlo Park in 1965, in which leading scientists were offered LSD in conjunction to music therapy and relaxation techniques in order to help them find solutions to intractable problems they were struggling with.

At one point of the discussion, the subject of addiction was brought. This is a topic Chris has discussed several times on his podcast Tangentially Speaking with different guests over the years, since he's very critical of the so-called 'disease model' of addiction, which governs how organizations like Alcoholics Anonymous offer counseling and treatment. In the podcast, Chris explains to Jim and Kyle that he's skeptical of using the term 'addiction' in order to explain compulsive behaviors, be that the uncontrollable imbibement of alcohol or the buying of two hundred pairs of shoes (Chris has a PhD in Psychology, so he's not just spewing off opinions based on mere hearsay). To which Jim responded the following:

"Well... let me put out something that I am not comfortable at all saying I believe, because of that part of me saying “don’t do that, you will lose what little credibility you have left!” But I have listened to a report once of someone taking a psychedelic in the jungle (and she was back for the second year because the first year her depression of many years had alleviated). And she’s basically being tormented by some demons, and into the visual world that she is seeing in her Ayahuasca state walks the shaman --let’s call it her dream life.

And he says something to the demons, does something to the demons, and they go away. And she basically recovers, and does not have symptoms again. I looked at that and thought, “we have a very well-established truth that if you cut your hand open, it is opportunistic for various bacteria and viruses to get in there, and they don’t have any desire to help you. They simply are going to eat as much and as fast as they can, and should you die from that they will swear they didn’t intend it.”

Then --let’s skip Western medicine here-- you go to a shaman, and the shaman says: “My spiritual allies and I can see that you are being eaten by anger demons. And I am going to help them leave you, because I can help them both get out and go to some better place.” I’m thinking [right now] of a real friend [of mine], who recently seemed to have [had] an anger addiction.

See, with most addictions it looks like you get some benefit: A sex addict gets sex, an alcohol addict gets that lovely rush until you’re too drunk, and so forth. But I looked at anger and said, “wait a moment --there is zero benefit! You and everyone you touch feel terrible [...] It’s like ultimate bad breath [Laughs] And he’s recently gone to a shaman, and the shaman basically released the anger demon, and so far his behavior is incredibly different. Now, he had really good reasons for being angry at certain people in his life; but he didn’t have good reason for anger as a kind of infinite loop. So I’m really looking at going back to what Pasteur discovered --which is you make an opening in the physical level, physical things come and they can harm you, but your system is designed to keep them out-- and I’m now beginning to see that the mental system may have the same set of problems.

Now, that doesn’t mean that if your girlfriend dumps you, that you are going to be attacked by demons for the rest of your life; but it does mean that that’s possible." 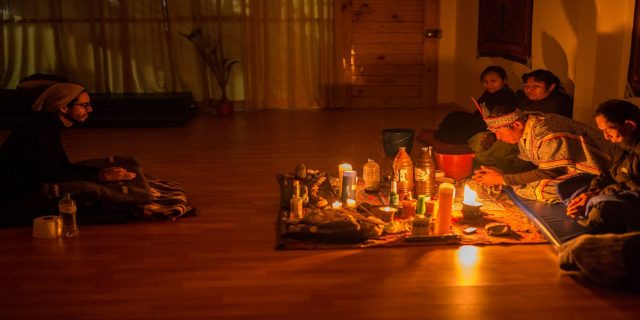 Possession by anger spirits? Chris's response to Jim was that those concepts should probably be seen in terms of mythology and alternative ways of thinking about mental problems, a-la placebo effect. It doesn't matter if you talk about demons in a metaphorical way, as long as you achieve the desired result --curing the addiction.

But Jim was adamant --no, he wasn't talking about psychological metaphors here. He was being serious:

No, no, I’m actually taking a different position, that it is perfectly thinkable! And that it is thinkable because if we lined up 1000 cultures, 850 of them would say: ”Yes, there are these spirits from the upper worlds and the lower worlds, and they interact with human beings, and some of them like to help you --just as human beings like to help others-- and some of them really just want to harm you, because that’s their nature.” Just as you grow carrots, and from the carrots point of view it’s a very strange behavior that no matter how nice they are, you kill them.

So here is a way of looking at it. And as I said, I’m beginning now to collect some stories that make sense. And it shifts of course, [but] what [this narrative] says is that Western science --by denying to look at this-- will never find it.

That Western narrative, of course, is the materialist interpretation of Nature which has influenced the course of scientific research for the last 2 centuries. 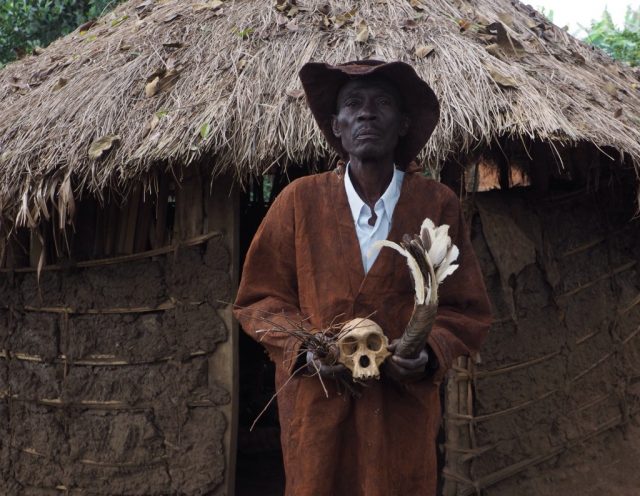 Fadiman proceeded to tell the story of a Stanford graduate student of his, who had taken his year of dissertation research to travel to Africa, where he was accepted into a tribe that had systems of trance and ancestor worship --systems they would use to sort out solutions for the daily problems of the community, and were regarded as invaluable sources of information. The student came back to Stanford to write his dissertation about these communications with spirits, until he was told in no uncertain terms that the Stanford Department of Psychology was all about the study of the 'Mind' --as in Mind=Brain-- and did NOT agree with that the student's pretended line of academic study since 'obviously' dead people can't talk to you. The same kind of closed mindedness that put an end to Fadiman's study of psychedelics for increase of creativity in '65 --and now, more than half a century ago, there's hardly a CEO in Silicon Valley that does not resort to psychedelics behind the backs of the public scrutiny, even if they're still considered to be dangerous illegal substances by the government --I'm looking at you, Tim Apple!

It is my sincere hope that the reader of this article does not end up concluding I'm advocating for replacing syringes and stethoscopes with crystal healing and New Age snake oil. I confess the act of writing these lines filled me with no small amount of trepidation, due to the recent trend of needlessly putting young innocent lives at risk of the diseases we had virtually eradicated in decades past --diseases which claimed countless lives before Louis Pasteur convinced his peers of the existence of a world unseen by the human eye, and helped us combat those invisible intruders using methods which would have been perceived as 'magic' a few centuries ago.

And yet, for all its great advancements, Western Medicine sometimes stubbornly refuses to accept the existence of certain things which can also be the cause for disease --prions anyone? 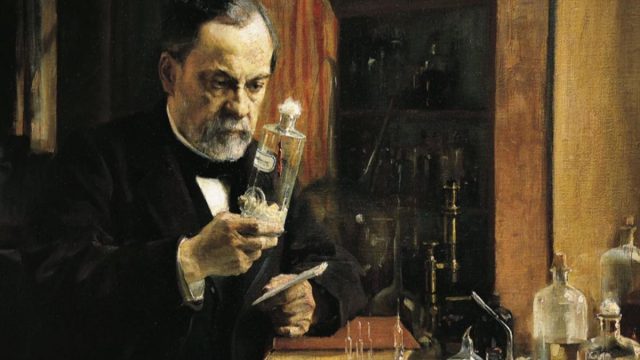 My choosing of Mysterious Universe for the publishing of this article is precisely because Aaron Wright's background in Biology and Medicine would never permit the ignorant dismissal of vaccines, but yet we can still entertain the possibility of opportunistic parasitism ('spiritual' for lack of a better word) caused by another type of hidden world --one for which we still don't have the right instruments to perceive it. Taking that leap would not necessarily be so much a renunciation of Western medicine but a complementation of it, in accordance to the current trend in cutting edge Physics that is inconspicuously recognizing Consciousness and Information as the ultimate building blocks of Reality itself. Because, like Jim Fadiman said in that highly recommended podcast, if Science continues to deny the existence of anything that lies outside its edge, then it inevitably turns into yet another dogmatic system. Technologies like Ayahuasca could very well help us peer into that edge, and surpass it.

Perhaps the ultimate future of psychedelics is to become the new microscopes of the XXIst century.