A new study suggests that a cooler Earth billions of years ago is the reason why we have diamonds instead of lumps of graphite. Professor Balz Kamber from QUT’s Earth, Environmental and Biological Sciences School, along with Professor Emma Tomlinson from the Department of Geology at Trinity College Dublin co-authored a study where they examined the magnesium oxide levels in thousands of samples of volcanic rocks that were collected from all over our planet and that date back at least 2.5 billion years.

Their research challenged the theory regarding Earth’s evolution and potentially answers the question as to why diamonds were able to be produced in the Archaean era which was between 4 billion and 2.5 billion years ago. They conducted research in order to explain why Earth’s mantle was cool enough to create these precious stones. 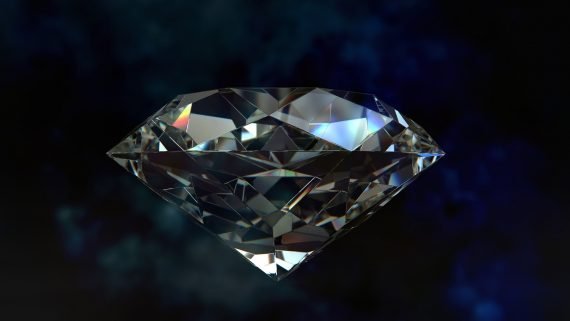 Professor Kamber explained that the testing done on the rock samples that determined the magnesium oxide levels during the Archaean era completely contradicts previous understanding that the Earth’s mantle was much hotter than it is today. “We know for a fact that the Earth produced a lot more heat back then – three to two-and-a-half times,” he said.

While petrologists who study the composition, structure, and origin of rocks believe that the Earth’s entire mantle was a lot hotter up until 2.5 billion years ago, Kamber says that the theory is only partially correct. He explained that while Earth’s lower mantle was much hotter, the upper mantle (the area down to 670 km) wasn’t any hotter than it is today. “It’s the upper mantle that matters because the volcanic rocks that we observe, they come from the upper mantle.”

Kamber went into more detail about his new theory by using the example of someone trying to warm up their bedroom in the winter by turning the heat up but not closing the windows. “You can produce as much heat as you like but it doesn’t get any warmer,” he explained, “So what we’re actually interested in is not how much heat we’re producing, but how warm it was in the interior of the earth.”

He went on to say, “The assumption has been: more heat, therefore it was hotter. But what we show is: more heat but not hotter. The Earth was producing more heat but was also getting rid of it, opening more windows so to speak.”

The levels of magnesium oxide in the rock samples that were tested show that they were quite similar to modern lavas which means that the temperature back then was pretty close to where it’s at today. Earth’s upper mantle would have to have been cooler in order for the diamonds to produce or else they would have been just lumps of graphite from too much heat.

I believe I speak for everyone when I say: thank goodness for a cooler upper mantle because without it, we wouldn’t have the opportunity to appreciate our precious diamonds that many of us love and cherish.