A History of Notre-Dame’s Crown of Thorns Relic

Now that the flames have been extinguished and the damage assessment has begun, many of the stories of the terrible fire that destroyed parts of the historic Notre-Dame Cathedral in Paris have mentioned a number of relics that were kept there and their post-fire status. Most notable is the object many believe to be the actual crown of thorns worn by Jesus at the crucifixion. How did this relic end up in Paris at Notre-Dame Cathedral in the first place?

"Father Fournier, chaplain of the Paris Fire Brigade, went with the firefighters into Notre Dame Cathedral to save the Crown of Thorns and the Blessed Sacrament."

France’s KTO Catholic television network reported on the brave act of Catholic Father Jean-Marc Fournier, chaplain of the Paris Fire Brigade, who rescued the relic. That surprisingly well-preserved braid of thorned rushes or shrub vines was kept in a donut-shaped reliquary made of jeweled rock crystal and displayed to the public on the first Friday of the month and on every Friday during Lent. The historical path it may have taken, assuming for the purpose of this discussion that it’s the real crown, from Golgotha around 30 CE to Paris 2019, is interesting, but has a number of chronological holes in it. 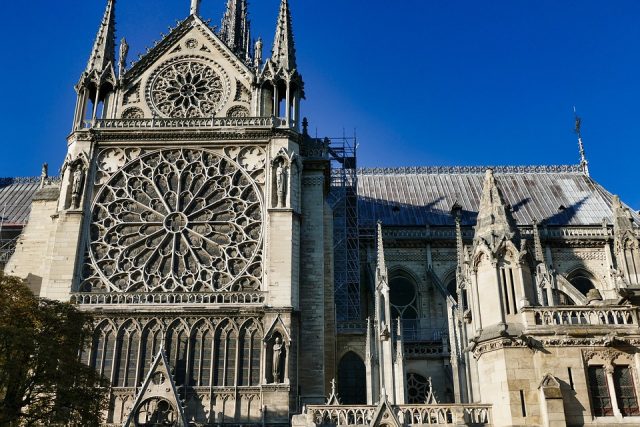 While some non-biblical writings refer to it, no documents state the crown survived until the Breviary or Short Description of Jerusalem which can be traced to about 530 CE. It mentions a crown of thorns being stored at the "Basilica of Mount Zion" in Jerusalem. That location is mentioned again in the itinerary of The Anonymous Pilgrim of Piacenza written around 570, and in the pilgrimage account of a trip to Mount Zion made by the monk Bernard around 870.

During this time period, there are reports of thorns being removed from the crown and distributed – most notably to St. Germain, Bishop of Paris, Charlemagne and Saint-Corneille of Compiègne. The rest of the crown stayed intact until it was allegedly moved to somewhere in Byzantium (possibly Constantinople) around 1063, just after the Great Schism of 1054. It appears to have safely stayed there while the Byzantine Empire crumbled around it until 1238, when Baldwin II, Latin Emperor of Constantinople, traded it to Louis IX (remember that name), King of France, for a loan of 13,134 gold pieces. Louis IX built the Sainte-Chapelle for the relic and that’s apparently where it stayed until the French Revolution, when it was moved to the Bibliothèque Nationale (the national library of France). In yet another deal -- the Concordat of 1801 between Napoleon and Pope Pius VII – the relic was moved to the Cathedral of Notre-Dame, where it stayed until it was rescued from the fire by Father Fournier and placed in a secret, guarded location.

One interesting side note. Another relic saved from the fire is the Tunic of Saint Louis. If that name rings a bell, it was allegedly worn by King Louis IX when he brought the crown of thorns to Paris after cutting his deal with Baldwin II. Louis IX was said to have worn the tunic while walking barefoot behind whoever was carrying the relic all the way back to Paris. That act, plus his devotion to the Catholic Church, got him canonized Saint Louis by Pope Boniface VIII, making him the only French king to be declared a saint.

Of course, none of this proves that this crown of thorns is the real Crown of Thorns. That debate will continue long after the Cathedral of Notre-Dame is restored to its pre-fire beauty.

The Speed of Viruses: Zombies vs. the Real World