A Mysterious Cavern in Africa and its Giant Snake Guardian

Located within the country of South Africa, near an inhospitable, scrub land matted place called Richtersveld, is a deep cave and cavern system that meanders down into the murk beyond where light reaches, and which is as mysterious as the surface of some forsaken unknown planet. Often called the the “Wonder Hole” or the “Bottomless Pit,” the cave and cavern system supposedly connects to the ocean, and has long been thought to harbor within it a trove of diamonds and other treasures. It is also according to legend prowled by an ancient, spiritual guardian long feared by locals and explorers alike, which jealously protects its glittering treasure and by some accounts seems to be more than mere myth.

The monster in question is known popularly as the Grootslang, or sometimes the Grote Slang, meaning “big snake” in Afrikaans and Dutch, as well as a variety of other regional names, and it has its origins deep in the mythology of the area. The Grootslang is said to measure about 40 to 50 feet long, sometimes even more, with scales as black as night, an elephantine body, and a long, serpent neck and tail, although it is often described as being merely a colossal serpent. It was apparently created by the gods with the features of both elephants and snakes, but proved to be so powerful and fearsome that it was torn apart into two different seperate animals; elephants and snakes. However, one of these abominations was said to have escaped and remained whole, going on to hide in the cave to spawn more of its kind and devouring whatever it could lure into its dank pit. According to the legends, it is not an unreasonable beast, and values gems over killing, offering to bargain for people’s lives in exchange for these treasures. Woe be to anyone who tries to take these gems, though, as the Grootslang will tear them to shreds. It is also known to leave its cave lair from time to time and prowl the rivers and lakes of the area as well, in particular the Orange and Vaal Rivers of South Africa.

While it seems to be nothing more than mere myth on the surface, there are a few sightings of this beast over the centuries that have cast wonder on whether it may actually exist or not. In 1867 explorer Hans Sauer spotted an enormous black snake nearly a hundred feet long making its way through the Orange River near Aliwal North, Eastern Cape Province. There was another account from 1899, in which a merchant named G. A. Kinnear was crossing the Orange River near Upington, Northern Cape Province, when 8-10 feet of the head and neck of a gigantic black serpent crashed up from under the waves near his boat.

Some very interesting sightings were made by the South African adventurer and prospector Lt. Fred C. Cornell, who had his first brush with the monster in 1910 during an expedition near Augrabiesvalle, Northern Cape Province. On this occasion an American expedition member named Kammerer came back to their camp in a terrified panic, claiming to have seen a serpent lift itself 12 feet out of the water as he had been bathing in a nearby pool. The second sighting would happen in 1920, and Cornell would write of it in his unwieldy titled book, The Glamour of Prospecting: Wanderings of a South African Prospector in search of copper, gold, emeralds, and diamonds, in which he would write:

It was dark when we floundered out of it, and we steered straight for a wide thicket of willows, made a big fire, and were only too glad to turn in. It seemed an excellent camp, with wood, water, and shelter from the cold wind, but it was plain that the "boys" were uneasy, and they crouched close to our fire instead of building one apart as they usually did. After some food Ezaak suggested that we might perhaps trek on a little farther, and this, coming after a most arduous day, was decidedly strange. We asked him why, and after beating around the bush for a bit he told me that in the middle of the river, and exactly opposite where we were camped, was a big rock in which the huge snake (the "Groot Slang", in which every Richtersfeldt Hottentot firmly believes) had his home, and that it was not safe for us or for our horses.

We had long heard of this snake; many reputable Hottentots and a few white men claim to have seen it, many more have seen its huge spoor in the sand or mud - a foot and a half wide. It is believed to take cattle from the banks, and the natives fear it mightily. There are no crocodiles in the Orange, and besides, there are never any traces of feet with the spoor, but it is a remarkable fact that the Hottentot name for this huge python - or whatever it may be - is "Ki-man" which is very like the Eastern name for an alligator. Anyhow, we were far too tired to care for snakes, and of course stayed where we were, the only thing to annoy us being the huge long-legged tarantulas that kept running with incredible swiftness into the fire, where they sizzled, squirmed, and smelt unpleasantly.

In the morning we found that the river here was a long, wide, still, and apparently very deep stretch of water, and that a big rock rose from the centre, as the guides had said. It appeared to be of granite, and was riven in half by a big cleft. The steep mud banks of the river should have shown a trace of anything coming up from the water, but we found no spoor. So we made up some dynamite cartridges with fuse and detonator, and flung them out as far as we could, and stood by with the "arsenal" handy in case the "Groot Slang" was at home and objected. The dynamite made a big upheaval, but no snake materialised; only a few small springers and barbel flapped round in the muddy water.

Then I saw something moving in the crack in the rock, and let drive with my rifle. I was in a hurry, and I heard my bullet hit the landscape somewhere in German territory; but Ransson had seen that movement too, and was emptying his magazine into the crack without undue loss of time. When we'd finished a very flustered and indignant old wild-duck squatted out of that crack and went away unhurt and quacking most derisively. No luck again with our "big game" shooting. 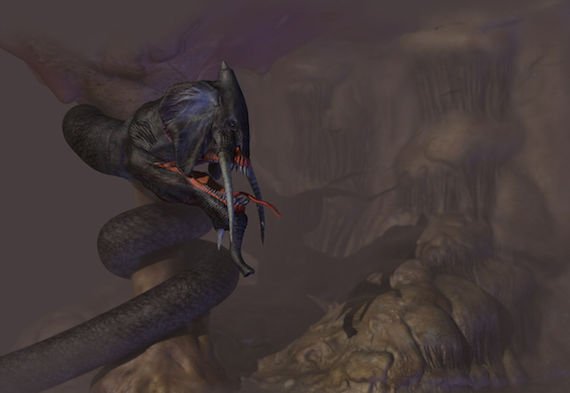 Yes, you read correctly, Cornell would apparently actually attempt to go on and use dynamite to try and kill the creature, without success, unless by success you mean tearing a new hole in the river. Interestingly, in 1917 there is the story of a prospector who launched an expedition to the cave by the name of Peter Grayson in search of diamonds, famously stating “I am determined to return to England as a very rich man or a dead man.” Apparently his team did not have a good time of it, many of them dying or turning back before they even got to the cave, but Grayson went on to forge ahead. It is said that he walked off toward the cave and went it to never come out, and local lore has it he was killed by the Grootslang.

In later years there was an interesting claim by journalist Lawrence G. Green in his 1945 book Where Men Still Dream, in which he recounts how the local tribes of the area refused to go any where near the pit where the Grootslang is said to dwell. All that is except one unnamed prospector who apparently made many forays into the cave looking for the riches said to be down there. Green would write of this enigmatic man and the Grootslang in general:

The cavern, they say, is connected with the sea forty miles away. If you lean over the edge of the pit and listen carefully, there comes at intervals a deep boom like surf on a distant shore. I know one tough prospector who took a winch and cable to the spot and explored a little of the "Wonder Hole". He is, I believe, the only man to attempt this feat. It was dark and extremely hot when his feet touched a ledge far down. The ragged circle of daylight seemed small. Bats flew in his face, and he dropped his electric torch. Before they hauled him to the surface he observed tunnels leading out of the shaft. There was a smell of sulphur in the air. He never descended again.

The "Great Snake" of the Orange River is something more than a legend. Cornell described it in his books. Scores of other men living near the river have sent letters to the newspapers declaring they had seen the monster. Native stories that the snake has enormous diamonds in the eye-sockets, and that a strange and evil influence is felt by all who behold it, may be politely dismissed. White eyewitnesses state that the snake is forty feet long, leaving a track on the muddy river banks about three feet wide. This spoor was followed by one party of prospectors for many miles before it disappeared into the river. The truth probably is that exceptionally large pythons have been seen in the river from time to time, and their sizes exaggerated. Pythons up to twenty-five feet in length have been shot; their powers of swallowing a buck whole are well known. But in the native mind there remains only one Great Snake, greatly feared. 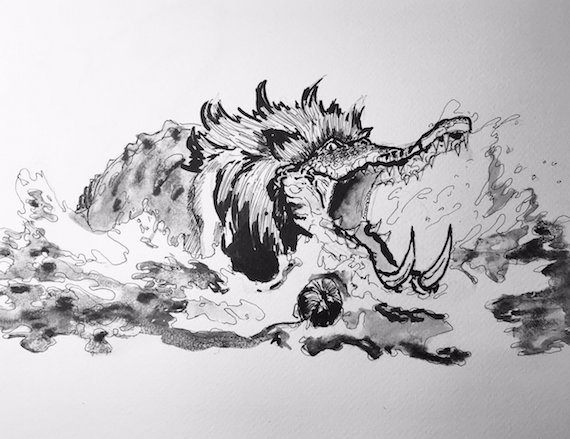 Sightings and accounts went on, when in 1947 there was a report from a John Clift, who saw a black crocodile near an abandoned mine crater, and such sightings have continued on into even more modern times, with strange and very large snake-like tracks often found near the water. There are numerous stories of people being chased off by some large reptilian monster down in the caves, and locals claim that many people have gone missing, the pit swallowing them up to never return. It certainly makes one wonder what might be behind all of the stories, and there are plenty of ideas, including that it is just outsized pythons or monitor lizards, a new species of reptile, a surviving dinosaur, some sort of long-necked seal, or just pure folklore. The generally harrowing terrain of the remote area itself, as well as the dangerous, unexplored nature of the cavern system, would probably go far to explaining why people may go missing. In the end we are left with another creature anchored in folklore which may or may not have some basis in reality, although as to what that reality might be we have no idea, and likely never will.

Archaeologists Uncover Ancient Jewish Village From The Time Of Jesus