Have you ever wondered why Ohio doesn’t have an official state monster? Me neither, but one reason might be it has too many mythical creatures, swimming monsters and other strange cryptids to choose just one. If the Loveland Frogman, the Minerva Monster, the Grassman or any other Buckeye State beasts are planning to lobby the state legislature for the title, they might want to step up their efforts because there may be a new cryptid in the competition… the Akron Pond Monster.

That’s the extent of the analysis by Jeremy Durant, an Ohio resident who this week recorded and uploaded not one but two short videos (see the first here and the second here) of something apparently swimming or floating in the Little Turtle Pond, which is not far from the famous Firestone Country Club and golf course (which has hosted the PGA championship three times) and the Cuyahoga Valley National Park where there have been a number of Bigfoot and/or Ohio Grassman encounters. Mysterious Universe was on top of the story and reported that Durant thought it might be an alligator – a species not native to Ohio, while wildlife officials from the Summit Metro Parks thought it might be a dying fish. 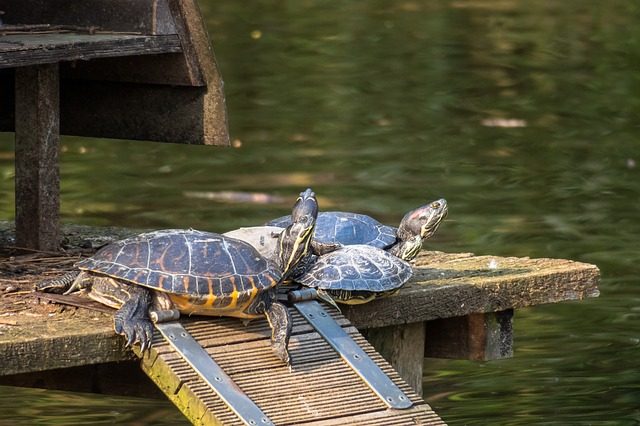 Could it be Bessie, Lake Erie’s monster namesake of its American Hockey League team, or one of her offspring? It’s about 40 miles from Lake Erie to Little Turtle Pond, but the alleged 40-foot monster, first reported in 1793 by a ship’s captain, was generally seen further west near the lake’s large islands. One theory is that Bessie was a large lake sturgeon, which the lake still has but in smaller numbers and length. While Little Turtle Pond does have fish (and turtles), it’s not suitable for sturgeons.

How about a Frog Man? The pond is over 200 miles from Loveland, a Cincinnati suburb where in 1955 a man reported seeing three four-foot-tall upright frogs apparently talking (croaking?) and waving a wand (hoping one would turn into a princess?). The Loveland Frog Men have been reported numerous times (most recently in 2016) but always in Loveland near the Little Miami River.

Maybe it was the Charles Mills Lake Monster? In the initial 1959 sighting, three boys allegedly witnessed a 7-foot-tall armless humanoid with scales, luminous green eyes and large webbed feet emerge from the lake (a manmade reservoir), which is about 60 miles from Little Turtle Pond. While it was never seen again, some think the 1963 report of an 11-foot-tall hairy beast with orange eyes spotted near the Charles Mills Reservoir was actually the Lake Monster.

Could that “thing” be the Crosswick Monster? In 1882, a boy in Crosswick, which is 20 miles north of Loveland, claimed he was carried off by a reptilian monster rumored to be living in or near a local creek. The boy was found in a massive tree, which 60 local men chopped down and found the monster, which ran off, but not before they got a good look at it.

“It is described as being 30 to 40 feet long, 12 to 14 feet tall when erect, 16 inches in diameter, and legs 4 feet long. It is covered with scales like a lizard’s, of black and white color with large yellow spots. Its head about 16 inches wide, with a long forked tongue, and the mouth inside deep red.”

The Crosswick Monster was never found nor seen again and some people think it was an escaped monitor lizard or an alligator that the excited and possibly inebriated men saw.

Which brings us back to the Little Turtle Pond monster. Was it an alligator as Jeremy Durant speculated? A dying fish? Or will it be entered into the annals of Ohio cryptids?

Did you watch the videos? Good luck with that!