In a new book, published through my August Night imprint, MJ Banias presents a nuanced exploration of the UFO phenomenon and the community that seeks to understand it. MJ's book, The UFO People, is distinct from the bulk of UFO literature in that he approaches his subject through the lenses of cultural studies and philosophy. But MJ is no armchair researcher. A former MUFON investigator in his native Canada, he has interviewed many witnesses to UFO phenomena and has not shied away from throwing tough questions at some of the most enigmatic and controversial figures in and around the field of UFOlogy. MJ has been interviewed on numerous podcasts and radio shows, and his work has been featured in Fortean Times and FATE magazines. He maintains a popular blog, Terra Obscura, which critically examines the culture, people, and ideas that shape how society responds to the inexplicable.

Here, MJ talks to me about UFOs, the people who see and believe in them, and the community of outsiders whose identities are bound up in a relentless search for a "truth" that seems tantalisingly and forever beyond our reach and understanding... 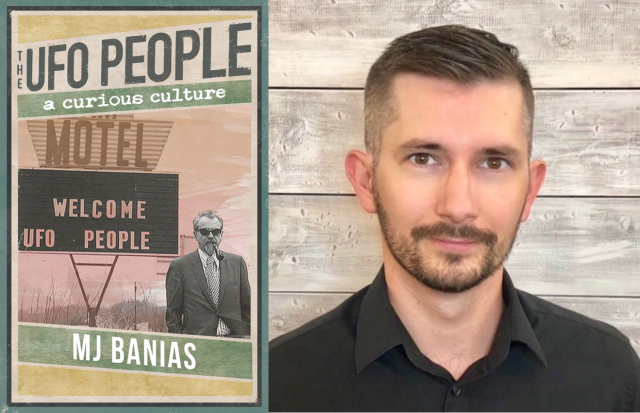 RG: Is it possible to separate the UFO phenomenon from UFO culture, or is the culture intrinsic to our understanding of the phenomenon?

MJB: It is impossible to separate social and cultural ideologies from “objective” phenomena. All knowledge, understanding, ideas, and objects are subject to the meaning imparted upon them by our collective cultural milieu. The UFO phenomenon is no different. Our systems of language, values, beliefs, political and economic structures all lend to what we understand the UFO phenomenon to be. Moreover, when we look at the UFO narrative, it is clear that the cultural and social zeitgeist of a given time seems to shape the UFO phenomenon itself. UFOs are a part of us, and we are a part of them.

RG: What excites you most about the UFO subculture, and what frustrates you about it?

MJB: That is a funny question, because the answer is the same for both. The UFO subculture is exciting because it is a perfect anarchy. It has no locus of control, no established hierarchy or structure of power. There is no ivory tower which governs what is and is not UFO discourse. Rather, the UFO subculture is totally democratized. Ideas and meanings, and, perhaps most importantly, power, floats around between different players and groups. It is completely counter-cultural. By its very nature, it challenges established mainstream systems (such as academia or capitalism, for example). There is a beauty in chaos. However, this chaos is also problematic. Since there is no set structure, since it is total anarchy, very little can ever be accomplished. Our current understanding of “progress” does not fit into the UFO discourse or community. Nothing has really been solved. If anything, the mystery is only greater now.

RG: Do you see any similarities between the UFO subculture and other anomalistic communities, such as cryptozoology and the paranormal? To what extent do these communities overlap?

MJB: There is significant connection between these communities. John Keel presented this notion fairly early on in his books Operation: Trojan Horse and The Mothman Prophecies. When one takes a step back to look at the entire UFO narrative, there are many connections between cryptozoology, paranormal research and general Forteana and anomalistics. While there may be some within these communities who do not like to be lumped together, there is significant lore across all those narratives that threads them together.

Where I think UFOs are uniquely interesting is how they affect political and economic power systems. No one worries about Bigfoot invading the planet or ghosts presenting technology which will undo the foundations of modern Capital. UFOs create a sort of political disruption which leads to often ridiculous conspiracy theories. Moreover, there are significant links between modern conspiracies political movements and right wing Neo-Nazism, among other similar ideological groups. I touch on this in my book, but I think it warrants much more study. 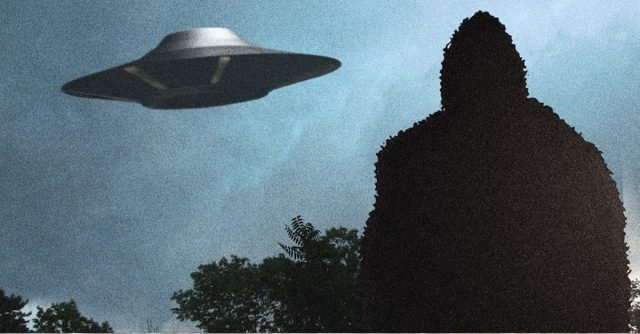 RG: In your book, you interview some of the most interesting and controversial figures in the UFO scene, albeit they are several steps removed from the scene, observing from the sidelines as they pursue their own research and agendas. Who are these individuals, and what did your learn from them?

MJB: We often hear about this shadowy group dubbed “the invisible college” or “the insiders” or “the invisibles.” They have become as mythologized as UFOs themselves. This “college” is a loose collection of individuals, some of whom know each other, but most do not. They all pursue the “paranormal" in some way, but they do so in secret, primarily because their professional careers would be affected. I spoke to several such individuals for my book, but only three allowed me to publish their names. They are Dr. Christopher “Kit” Green, Dr. Hal Puthoff and Dr. Garry Nolan.

The work that they do pushes science to the outer fringes, but they do it because they, like the rest of us, want answers. My book provides a deep look into their projects and their thoughts on the UFO enigma, as well as the UFO community itself. The book explores the military and intelligence interests in their work, how human health has been affected by the phenomenon, and how their work may reshape our understanding of what it means to be human. While their work is impressive, and is gaining significant attention within UFO circles, they are just people. Most of them want to be left alone to their work, and live in the ghostly realm in between their professional careers and their personal interests.

RG: Why should UFO researchers read your book? What does it contribute to the knowledge and debate?

MJB: Many UFO researchers will undoubtedly be offended by my book because it calls into question the very ideology which drives them. The book is not so much about UFOs as it is about people. It challenges what we believe UFOs to be and highlights one key truth: no one has any clue what is going on.

The book explores how we make meaning, and that UFOs seem to shape themselves to our interpretation of them. When it comes to UFO research and “knowledge,” the book uses contemporary philosophy to challenge our ufological assumptions. UFOs, in simple terms, are ghosts in our society. They are a symbiotic mix of reality and mythology—they exist and do not exist. Moreover, UFO researchers fall victim to this spectrality. In chasing ghosts, we become ghosts.

RG: Your book features original essays by a number of respected researchers. Who are they and what have they contributed?

MJB: My book features three contributions from four writers. The first is a chapter by A. J. McCormick, who is an experiencer. She is featured prominently in the first part of my book. I've also included a groundbreaking essay by Allison Jornlin, which presents her current research into the historical roots of paranormal studies in the context of gender politics. Finally, a joint essay by Paul Dean and Barry Greenwood -- two of the best UFO historians alive today -- provides a concise and essential history of the UFO phenomenon, and specifically the Extraterrestrial Hypothesis (ETH).

RG: Do you consider yourself part of the UFO community, or are you a removed observer?

MJB: Perhaps this is really what the book is about. Is the UFO community real? Does it exist? Or, are we simply phantoms wandering in between our daily official reality and some counter-cultural netherworld?

I am a member of the community. I’m not sure how or where I fit though. I am not a ufologist. I am not a UFO researcher, per se. While I do study UFOs and the paranormal, I focus more on the people, and how they interact on a cultural and philosophical level with strange phenomena.

RG: What do you hope to achieve through your work?

MJB: I want the community to think critically. Moreover, to have the community reflect on the philosophical nature of the UFO phenomenon and discourse. I want to begin chipping away at the idea that UFOs and other associated phenomena are ghosts within the human machine, and vice versa, this paranormality is inherently a part of us.

RG: Have you drawn any conclusions about the underlying nature of the UFO phenomenon? Is there an ontological reality behind UFOs, or is it purely a sociocultural phenomenon?

MJB: The only sane answer here is “I don’t know.” Do I believe that people experience anomalies and bizarre events that are objective, that is, outside of their own minds? Yes. Something strange is going on. Beyond that, the data is far too chaotic to ascertain any knowable facts. UFO discourse is a spectrum of prosaic lights in the sky to episodes of incredible high strangeness.

As I mentioned earlier, UFOs and other paranormal phenomena are inherently tied to humanity. We give UFOs meaning, we provide for them a place and space to manifest and “be.” However, that is not the whole story. Those phenomena come from somewhere, from some unknown source. Something is made real so it can be seen or gives of a radar signature. Something must leave landing trace marks. Clearly, something tangible is popping in and out of our awareness.

We need to be cautious not to oversimplify the phenomenon. I am often asked what I believe when it comes to UFOs. This is difficult because my beliefs, or even "what I think I know," is not factual or true. It is merely speculation. All claims regarding the UFO phenomenon are pure speculation. If anyone claims to KNOW what UFOs are, then they are most likely delusional or trying to sell you something. The best we can do is to keep searching for answers, and not trust anyone who says they have them.

The UFO People is available now from all good online bookstores. For more of MJ's work, visit his blog, Terra Obscura. 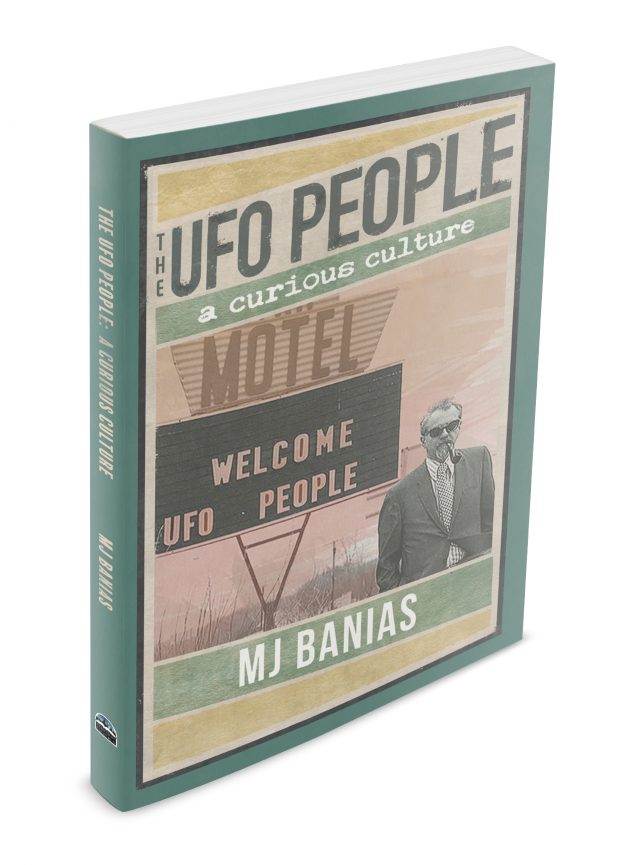