English Residents Prepare For The Spookiest Night Of The Year – St. Mark’s Eve

When asked what the spookiest night of the year is, most of us would say Halloween, but for the residents of several English villages, the scariest night of the year is April 24th – St. Mark’s Eve. According to legend, during that night people will be able see the ghosts of those who are about to pass away within the next 12 months.

Between the 17th and 19th centuries, on the night of St. Mark’s Eve, residents in many English villages sat quietly on a church porch between 11 P.M. when the bell first rang and 1 A.M. when it would ring again. During those two hours, the ghosts of those who are about to die within the next year could be seen walking into the church.

The following day on April 25th – St. Mark’s Day – celebrates Mark the Evangelist who wrote the Gospel of Mark. He was a very important person in early Christianity and was the first ever bishop of Alexandria. He is also known as – and honored as – the person who founded Christianity in Africa.

As for St. Mark’s Eve, let’s take a look at some of the terrifying things that are said to occur between 11 P.M. and 1 A.M.

The ghosts of the people who are going to die very soon will be seen first, while those who are going to pass away near the end of the 12 months will be witnessed closer to 1 A.M. Some have even claimed to have seen rotting corpses, headless bodies, and even coffins.

One less creepy tradition of that night is that if a young woman holds her smock in front of a fire, she’ll be able to see the face of her future husband.

At Smithills Hall in Bolton each April 24th, it is said that a footprint in the stone floor turns to blood. The footprint was created by George Marsh who was executed for heresy. Even his ghost has been seen in the Green Room where he was interrogated – more times than just on St. Mark’s Eve. The spirit of a priest has also been seen in the area as well as a grey lady and a cat.

The apparitions of those who will die in the next 12 months will appear in the Whittlesford Churchyard in Cambridgeshire and lay in the spot where they will eventually be buried before disappearing into the ground. St. Mary’s Churchyard in Scarborough, North Yorkshire, is another location where people have seen the ghosts of those who are about to die walk into the church at exactly midnight. 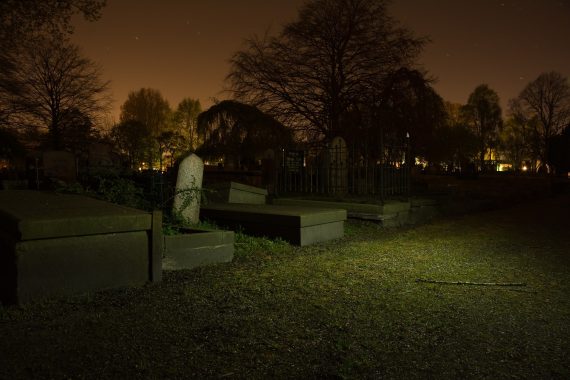 Wanting to see if the legends were true, two men decided to camp out by the porch of Haxey Church in Lincolnshire. While one of the men fell asleep, the other stayed awake and witnessed the apparitions of several people he recognized including his friend who had fallen asleep. Every person he saw – including his friend – all passed away within the year.

Another disturbing folklore is that if someone turns around seven times while standing in a garden on that night, a man will suddenly appear behind that person.

While the legends are interesting and creepy to say the least, it may be a good idea to stay hidden inside on St. Mark’s Eve unless you dare to step outside and perhaps witness the ghosts of those who will leave the Earth in the next 12 months.