Throughout the world there have always been legends and lore associated with the dim wilds of our landscape. Dark and forbidding, swamps in particular have attracted such tales since time unremembered, and it seems as if every such murky wetland has its share of spooky lore orbiting it. This is especially prevalent in Slavic cultures, and here the swamps have taken on a whole new level of surreal terror as the haunts of various demons and evil spirits.

A very prominent swamp demon in Slavic folklore is the one called Bolotnik, who appears typically as a hunched over, disheveled looking old man with scales, frog-like arms, a green beard and hair, an over sized mouth, a tail in some traditions, and the whole of him caked in mud, muck, and algae. Bolotnik prowls through the sludge of the swamps and marshlands looking to lure people and animals to their doom using a variety of wicked methods. One of his favorite ways is said to be to mimic the calls of animals or create will o’ wisps, floating, dancing balls of light, which entrance and draw in the curious until they are stuck in the quagmire of mud and reeds, after which the demon will viciously drag them to their death. He also in some traditions is said to grow alluring herbs or beautiful flowers, where he lies in wait for someone to come along and try to pick them. He will also occasionally use his shape-changing powers to become a stepping stone, latching onto whoever is foolish enough to step upon him. 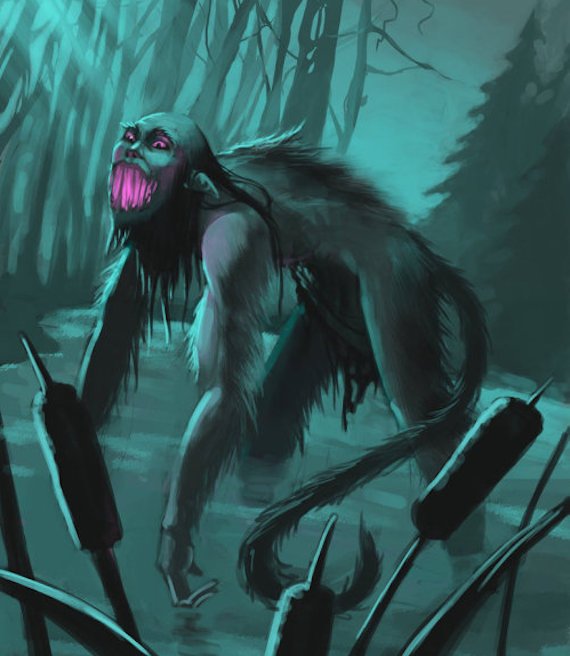 In some versions of the lore, Bolotnik has a wife or mate, called Bolotnitsa, who appears as an incredibly attractive water maiden, usually pretending to be lost or in toruble in order to trick people into entering the swamps where they will killed. It is said that the only way to see her true demonic nature is to look at her feet, which appear much like a frog’s, and some lore says she also has legs like those of a goose, which she will try to hide with leaves and mud or by sitting on a water lily with her legs folded underneath. Conversely to her form as a beautiful maiden, Bolotnista’s true form is more an old witch-like hag with crooked, broken teeth and weeds in her hair, and she is said to have the power to invoke wind, rain, and hail.

Bolotnista is often said to be one of a race of beautiful female water nymphs called the rusalki, a sort of Slavic version of mermaids, who live in rivers, lakes, swamps, and marshes. In most traditions, the rusalki are the spirits of women who have died under violent circumstances in or around bodies of water, such as murder, suicide, or drowning, and they are quite often portrayed as beautiful sirens trying to lure men in to join them in their watery graves, although other legends depict them as more benevolent and playful. They typically are able to get around quite well on land, having functional legs that allow them to wander about getting into mischief, and in many areas there are still festivals at the beginning of summer where swimming is forbidden and there are rituals carried out to keep the rusalki away. A similar female swamp spirit is called the shishiga, who appears a a pale, nude woman by the water combing her hair, and who will drag to their death anyone who approaches her. It is said that even to look at a shishiga will lead to certain death by drowning in the near future.

Another evil form of Slavic female swamp demon is the notorious Dziwożona, also called the Mamuna or Boginka. In many areas it is said that these demons are formed from the souls of women who have died in childbirth, unmarried mothers, or children born out of wedlock. The Dziwożona usually appears as a disgusting old green-haired crone with a foul smelling hairy body and wearing a red hat with a fern twig attached to it. The Dziwożona’s modus operandi is to kidnap human babies and replace them with her own twisted, deformed, and vicious offspring, and the only way to stop this from happening is said to be to tie a red ribbon around the baby’s hand or put on a red hat on it, as well as to shield it from the moonlight. A mother whose baby has already been kidnapped can try and reverse the situation by going to the swamp, whipping the imposter baby with a birch stick and pouring water over it from an eggshell while begging “Take yours, give mine back!” after which the Dziwożona may or may not take pity on the beaten baby and switch them back. It is also believed that St. John's wort flowers can keep the Dziwożona away.

Besides malevolent female swamp demons there are male versions in Slavic folklore as well, such as the Vodyanoy, also spelled Vodyanoi. They appear as old men with black scales, webbed appendages, a fish tail, and frog-like faces, as well as sometimes with long, scraggly green beards. Like many of the other swamp and water spirits we have looked at here, the Vodyanoy is not at all friendly, and is in fact most often blamed for any drownings in the area, as well as for the breaking of dams or water mills. When not engaged in this nefarious behavior, they can be seen relaxing on the water or smoking pipes. In the lore of some areas they are said to collect the souls of those they have drowned within a teapot, and they are often possessed of the ability to control fish as servants, which has led to the belief in some areas that fishermen can call upon the help of a Vodyanoy for a good catch by giving an offering of tobacco. However, for the most part they are avoided, and in some regions they are truly seen as very real spirits that are not to be crossed. 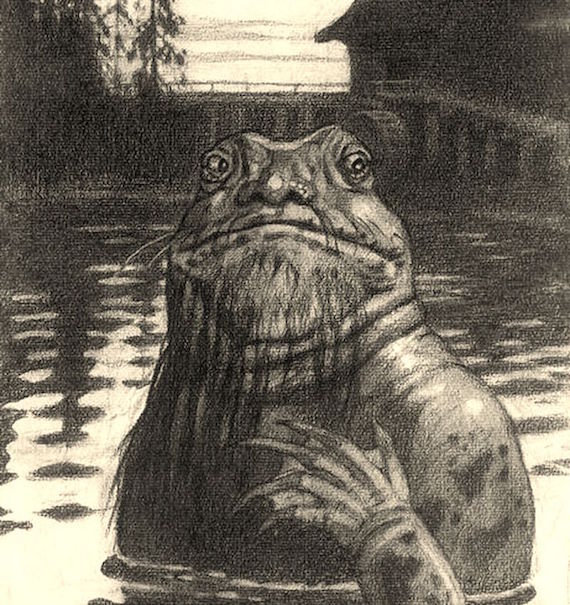 It is interesting to note that in many of the areas where these myths are prevalent the locals tend to wholeheartedly believe in their existence, and they go beyond mere myth and legend for these people. The swamps, marshlands, and waterways are truly thought to be prowled by these forces, and they tend to have a place somewhere in reality, these creatures conjured up from the human subconcious to take their place in the world that these people know. It is a fascinating peek into how the landscape works itself into our psyche and manages to breed such stories, and looking at this selection of creepy swamp dwellers, whether they ever existed in any form at all it seems enough to make one wary of stepping foot into these dark, murky places of sinister lore.