So hear me all and listen good,
Your effort will be worth the cold.
If you are brave and in the wood
I give you title to the gold.

The hunt for the mysterious Fenn Treasure has allegedly claimed at least four lives. The hunt for Forrest Fenn himself is not as difficult, but turned out to be almost as dangerous for a frustrated treasure hunter who was caught stalking the 88-year-old who allegedly buried $2 million worth of riches in 2010, leaving clues to its location in a cryptic poem.

"He seems to be drawn to the belief that the treasure is Mr. Fenn's granddaughter, and he's been stalking her for quite some time. The family said he's been engaged in this type of activity for almost five years."

“He” is 49-year-old Francisco ‘Paco’ Chavez who lives in Nevada but, according to Santa Fe Deputy Police Chief Ben Valdez, has been coming to New Mexico to harass Fenn and his family for years. The latest visit was on April 20th when Fenn called the police after Chavez told him through an intercom that he was at the front gate. Fenn says he got his gun and went to the gate, but Chavez was gone. The police arrived and searched the grounds, but no Paco was found. However, they knew enough about Chavez to locate him on April 22nd and bring him into custody. According to The Santa Fe New Mexican, in addition of a new charge of harassment, Chavez is in bigger trouble because he’s on probation for pleading guilty to stalking Fenn last year and for previously violating that probation by failing to report and tampering with an electronic monitoring device. 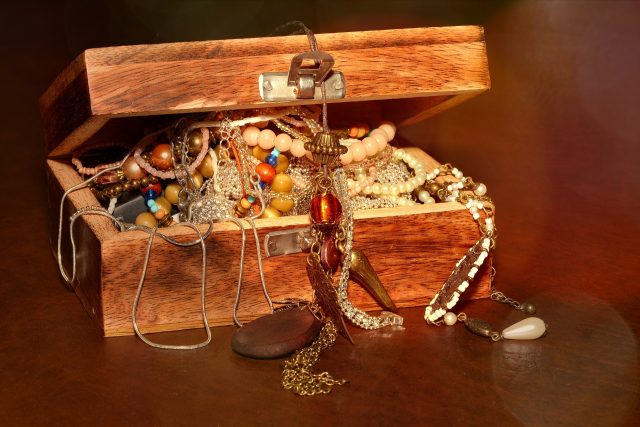 “I’ve said 100 times that the treasure is not on my property. It’s north of Santa Fe.”

That’s what Forrest Fenn said in October 2018 after Robert Miller, another frustrated treasure hunter, was arrested for breaking into his house and stealing a chest that he believed held the treasure. The unlocked chest was later found to contain linens and clothing. Are these break-ins part of Fenn’s game? That’s not likely since he also pointed his gun on Miller, holding him until the cops arrived.

But tarry scant with marvel gaze,
Just take the chest and go in peace.

Fenn’s poem, published with maps in The Thrill of the Chase and Too Far to Walk, doesn’t allude to any dangers in the quest beyond those of physical exertion, but many have asked him to reveal the location and end the contest after the number of people who may have died looking for it rose to at least four in February 2018 when Jeff Murphy fell 500 feet to his death while treasure hunting in Yellowstone National Park. While there was some speculation that Murphy sent Fenn an email a few days before stating he’d found the location of the loot, Fenn says he’s never been to that spot. Is that the truth or just truthy?

It’s been nine years since Forrest Fenn allegedly hid a treasure worth $2 million or more. No one has found it yet, but he’s been stalked, harassed, threatened and shamed by relatives and friends of those who have died searching for it and others who have wasted time and money in the quest. Has it really been worth it to this eccentric millionaire?

“No one knows where that treasure chest is but me. They can go get it. But I’m not going to tell them where it is. If I die tomorrow, the knowledge of that location goes in the coffin with me.”

Has it been worth it to the frustrated treasure hunters ... the ones who are still alive?

What would YOU do for a chance at $2 million?