Haunted Wrigley Field and the Curse of the Billy Goat

One of the most well-known ballparks in the world first opened its doors in 1914, in Chicago, Illinois. What would become Wrigley Field was originally owned by Charles Weeghman, who owned the team called the Chicago Whales of the Federal League, both of which would fizzle out in 1915, leading Weeghman to buy the Cubs and relocate them to his ballpark. The team would then be sold to William Wrigley, with the stadium taking his name in 1926. Wrigley Field, and its team the Chicago Cubs, have gone on to have one of the longest and most doomed careers in North American professional sports, losing seven World Series, fading out in 1969 only to be brought back to life, and having an abysmal championship drought lasting over 100 years, with not a single championship win from 1908 to 2016. They are the longest suffering franchise in all of professional baseball, and this may be in no small part due to the ominous curse said to hang over this legendary place. Welcome to the cursed and haunted Wrigley Field of Chicago.

By far the most ominous and well known supposed curse of Wrigley Field’s began on October 6, 1945, when a William Sianis, a local owner of an establishment called the Billy Goat Tavern, got himself two tickets to see the Cubs play against the Detroit Tigers in the World Series. One of these tickets was for him, the other one was for his pet goat, Murphy, who was sort of the mascot of his tavern. At that time the Cubs were actually up two games against the Tigers, with hopes high that they would win, and it was an exciting time for Cubs fans as it would be their first since winning the series way back in 1907 and 1908, when the team was on fire with two back-to-back World Series wins. Sianis followed through and showed up on game day with tickets in hand and the goat by his side. Here the story diverges into different versions, with one saying he was flat-out refused entry because of his animal, and another saying that he was allowed in but later kicked out because other audience members were complaining. Whatever the case may be, the end result is the same, with a very upset Sianis allegedly vehemently cursing the team and forbidding them from ever winning a World Series again. 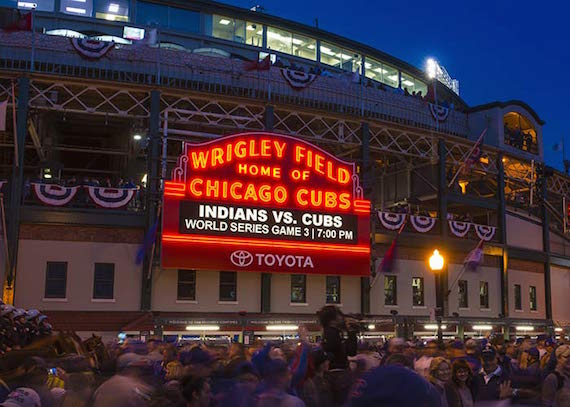 Whether this curse had anything to do with what happens next is up for debate, but the Cubs promptly lost game 4 and the best-of-seven series, and would not win another World Series in decades. It was odd considering that up until that point they had actually been a pretty successful team, the first to win two back to back World Series in 1907 and 1908, winning four pennants in a ten year span in 1929, 1932, 1935, 1938, and appearing in the World Series on each of those years. From 1876 to 1945 they had had a total of 51 winning seasons, 16 first place finishes, and 16 pennants and World Series appearances, but after that game with the goat their fortunes suddenly and inexplicably plunged to new lows, and various weird occurrences seemed to point to some sort of curse going on, such as the inexplicable appearance of a black cat on the field, which walked between future Hall of Famer Ron Santo and the dugout during a June 4, 1969 game with the New York Mets at Shea Stadium, which the Cubs would then lose 7-1. The cat itself was totally out of nowhere, and disappeared under the stands just as quickly.

What would go on to be known as the "Billy Goat Curse" was soon rather infamous, and the persistently losing Cubs became widely known as “The Lovable Losers.” They would not only not win any World Series, but not even really appear in the series, and would only have 15 winning seasons and 3 first place finishes from between the years of 1946 and 2003. This dire situation made being a Cubs fan a never-ending string of disappointments, the once great team now on a losing streak that could not be broken, although this isn’t for lack of trying, and the odyssey of people trying to get rid of the Billy Goat Curse is almost as colorful as any of the team’s dismal losses.

The first to try and break the curse was Billy Sianis himself, and he claimed to have done it in 1969, but the Cubs kept losing regardless. His nephew, Sam Sianis, would show up at Wrigley Field a total of five times in 1973, 1984, 1989, 1994, and 1998 with a goat descended from Murphy, under the impression that if it were let in the curse would be lifted, and the audience agreed, chanting “Let the goat in!” over and over again to no avail. The first attempt in 1973 saw the goat brought to the field in a white limousine and lavishly ushered over a red carpet up to an entrance that would ultimately not allow it in. In 1984 Sam Sianis actually got the goat onto the field, and this seemed promising as the Cubs began to win their way to the division title, but alas they lost to the San Diego Padres.

In 2003 an intrepid group of Cubs fans tried to sneak a goat into the stadium but failed. They would nevertheless claim that the curse was lifted when they opened an enormous scroll and read out a verse. The Cubs would actually then win the division and get close to the World Series, but it wasn’t quite good enough. Interestingly, 2003 was also the year of what has been called the “Bartman Curse,” which is an extension of the Billy Goat Curse. In this year the Cubs had won the division, and were now up against the Miami Marlins in their bid for the World Series in the National League Championship Series.

The Cubs were actually up 3 games, and in this game they were winning 3-0 in the top of the eighth inning. They might have won it too, if it hadn’t been for a ball blown out into the left-field line by the Marlins, which Cubs outfielder Moises Alou heroically went to catch, with only five outs needed for a victory. In a freak occurrence that only cemented the idea of a wicked curse, a fan in the stands named Steve Bartman also reached for the ball, only to deflect it away from Alou, resulting in a walk. The Marlins would go on to score run after run and win the game, eventually winning the series in 7 games to leave the Cubs out of World Series contention, despite the Cubs having a world class team roster at the time. This one ball was considered to be so cursed that it was actually purchased by the Harry Caray Restaurant Group expressly to destroy it, but this did not lift the curse either.

In 2007, a burnt dead goat was found outside the field in someone’s sick attempt to reverse the curse, with a sign on it that read “Go Cubs Go,” but they didn’t "go," they just continued to lose. The curse by now was such a running theme for the cubs that the Billy Goat Tavern even had a timer that counted off how many years and days the Cubs had been losing. Efforts to exorcise the team's demons continued on in 2008 before a League Championship game with the Dodgers, when a priest named Rev. James L. Greanias showed up at Wrigley Field to literally purify the dugout with holy water and offer prayers. The Cubs still lost. Another dead goat was found strung up outside the field in 2009, and in 2011 there was actually an organization formed called “Reverse The Curse,” as well as another called “Crack the Curse.”

One of the missions of the latter was to take a goat on a pilgrimage to Wrigley Field in an effort to raise money for cancer research in 2012. More dead goats followed, with a goat head left there in 2013. A very weird stunt was pulled off in 2015, when there was an eating contest to consume a whole roasted goat in 13 minutes and 22 seconds. This one might have worked, because the following year the Cubs would finally win the World Series against the Cleveland Indians, suggesting the “curse” was behind them, the losing streak smashed and the timer at the tavern set back to zero. Weirdly enough, 2016 in general was a come-back year for the beleaguered team in other ways as well, as the Cubs had also won their first 100-win season in 2016, winning the National League Championship Series, their first pennant in 71 years, on October 22, 2016, exactly the 46th anniversary of Billy Sianis’s death. Coincidence?

It is hard what to make of this one, as the sports world is notoriously superstitious, and “curses” on various teams are nothing new, but the fact that the Cubs had the longest losing streak in baseball history that was only really ended after the one who cast their supposed curse died is rather odd at the very least. Over the years the long run of misfortune has also been blamed on a rumor that the ballpark was built on an old burial ground, which has not been proven but which might definitely give the team bad luck. There is also the idea that the fact that Wrigley Field lies in the path of what is called the Haidan Totem Pole could account for it. The totem pole was stolen from the Haiden Indians and long placed directly west of Lakeshore Drive toward Wrigley Field. The totem pole has a lot of stories surrounding it, such as that the faces would often change expressions or positions, but it was returned to its rightful owners in 1985.

Interestingly enough, besides insidious curses, Wrigley Field is also said to be haunted by at least three ghosts. One of these is said to be the famous baseball announcer Harry Caray, who is supposed to haunt the the press box and the adjacent bleachers at the stadium. Another is the ghost of singer, songwriter, and lifelong Cubs fan Steve Goodman, who even had his ashes scattered at Wrigley Field and apparently appears to cheer on his favorite team even in death, with his specter often seen sitting in the bleachers right behind home plate. There is also supposedly the ghost of the former Cubs manager Charlie Grimms, who led the Cubs to the World Series in 1932. It all adds more dark and spooky allure to the mystique surrounding this place, and Wrigley Stadium has become not only an icon of American baseball, but also a place infused with tales of the mysterious.

Special thanks to Glenn Harrison at Hardcore Paranormal for his invaluable input in this article.