Lost Sequel to “A Clockwork Orange” Found in Author’s Archives

"I was cured all right."

If you remember the “prestoopnick” who repeated those words incessantly to his “droogs” in a “khorosho” of a novel followed by an even greater horrorshow of a movie, then you’ll be pleased to hear that an unpublished sequel of sorts to “A Clockwork Orange” has been found in the archives of its author, Anthony Burgess, and it may help explain the novel’s dystopian world and the aftermath created by the book and its graphically violent and controversial movie.

"This remarkable unpublished sequel to A Clockwork Orange sheds new light on Burgess, Kubrick and the controversy surrounding the notorious novel. The Clockwork Condition provides a context for Burgess's most famous work, and amplifies his views on crime, punishment and the possible corrupting effects of visual culture."

Professor Andrew Biswell, director of the International Anthony Burgess Foundation, says the 200-page unfinished manuscript titled The Clockwork Condition was uncovered as the foundation was cataloging the papers of Burgess which came to Manchester, England, from Bracciano, Italy, where Burgess died in 1993. Biswell, a professor of English at Manchester Metropolitan University, told the BBC that Burgess attempted to write a non-fiction follow-up that was "part philosophical reflection and part autobiography" but gave up when he realized "he was a novelist and not a philosopher.”

“A social satire dealing with the question of whether behavioural psychology and psychological conditioning are dangerous new weapons for a totalitarian government to use to impose vast controls on its citizens and turn them into little more than robots."

"It is a story of the dubious redemption of a teenage delinquent by condition-reflex therapy. It is, at the same time, a running lecture on free-will.”

Director Stanley Kubrick tried to explain his film (he also wrote the screenplay), which starred Malcolm McDowell as the ultra-violent young prestoopnick (criminal) Alex DeLarge, to critics who initially forced it to be rated “X” in the U.S. because of the scenes of extreme sexual violence. Kubrick eventually cut 30 seconds to get an “R” rating and the movie was a box office smash. “A Clockwork Orange” was nominated for four Academy Awards and established Malcolm McDowell as a bona fide movie star. However, the film was also blamed for murders in the UK that seemed to be copycat crimes inspired by it.

"Burgess felt very strongly that he was in the firing line. He's very concerned by the accusation that this film has provoked people to do evil things."

Biswell says The Clockwork Condition was an attempt to address Kubrick’s movie and these accusations as well as delve deeper into Burgess’ real views on the current (at the time) feelings of alienation he believed were being caused by television and the mass media in the 1970s. 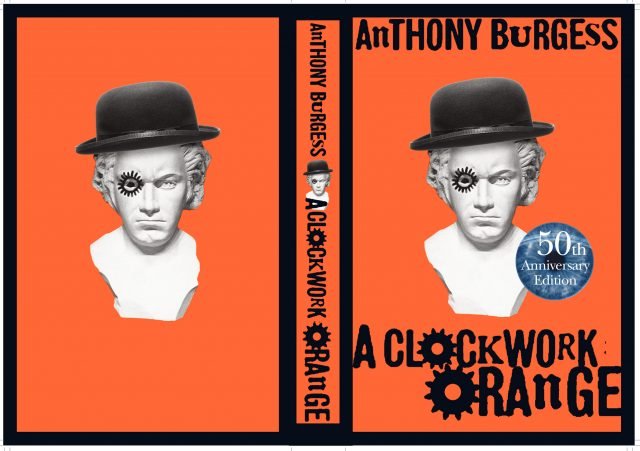 The Clockwork Condition also addresses another great mystery of the novel.

“In 1945, back from the army, I heard an 80-year-old Cockney in a London pub say that somebody was “as queer as a clockwork orange.” The “queer” did not mean homosexual: it meant mad... For nearly 20 years I wanted to use it as the title of something... It was a traditional trope, and it asked to entitle a work which combined a concern with tradition and a bizarre technique.”

Biswell doesn’t say if the manuscript will ever be published, but he gives a hint, say that Burgess’ comment that he was “a novelist and not a philosopher” meant “it’s probably not all that great.”

That would be a shame. The Clockwork Condition sounds like it may help us understand why 2019 feels “as queer as a clockwork orange.”

“We can destroy what we have written, but we cannot unwrite it.”

Mysterious, Unidentifiable Photograph From Nowhere Creeps Out the Internet