Why does anyone live in Siberia anymore? True, there haven’t been any massive sinkholes appearing after deafening booms lately, but global warming hasn’t abated and it’s only a matter of time before more permafrost thaws and releases more methane, opening more ground-swallowing lake-forming orifices. Then there’s the meteors … there have been three major meteor events since December 2018 in the Tunguska area. True, none of them compare to the famous Tunguska Event in 1908 which obliterated 2,000 square km (770 square miles) of forest, so some Siberians may be thinking that – like with never-the-same-spot-twice lightning strikes or 100-year-floods – it’s safe to live there again. That feeling was obliterated too last week when two huge fireballs flew over the same area and one crashed to Earth, causing experts to call it the “New Tunguska” meteorite. Has the mass exodus to Moscow started yet?

“I panicked as it sounded and looked like a plane on fire, I got really scared of the noise and shine it created. I pulled a phone out of a pocket, but it flew across the sky so fast that I only caught a long white trace it left.”

A woman from Krasnoyarsk described the daytime April 6 fireball to The Siberian Times, which reports there were many witnesses and many photographs and videos of the event. (View photos here, video here.)The local ministry of emergencies a usual said there was nothing to worry about since it didn’t pose a threat to people or infrastructure. That’s probably what the government officials living upstream of Tunguska said of the meteor passing overhead in 1908. 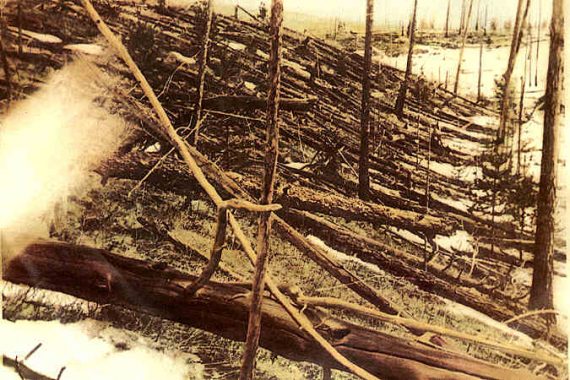 “It was a bolide that moved with a speed higher than the New Tunguska meteorite (LINK) from Evenkia. Its structure must have been quite loose given that it split into fragments.”

Viktor Grokhovsky from Ural Federal University joined the “too late to worry about it now” crowd in pointing out that the April 6 bolide broke apart in the atmosphere. That’s not what happened on March 15 however.

“I was home when I heard loud thunder which sounded like an explosion. There was a huge glow, floor trembled and dry branches fell of a birch tree in the yard. I panicked and called my brother who lives some 300 metres away. He said he wondered if this was a plane crash.”

Natalia Moskvitina, head of the Uchami, Evenk, village in Northern Siberia described the meteor to the Siberian Times. That nighttime green, yellow and orange fireball was also seen and recorded by many witnesses. (View photos here.)  Of course, who listens to witnesses and local officials? NGS24.RU news quoted Viktor Grokhovsky:

“I think it was a meteoroid no larger than a meter in size. Unlike the Chelyabinsk meteorite, it moved at a slower speed.”

Grokhovsky compared it to the 2013 Chelyabinsk meteorite which injured over 1,000 people. The New Tunguska couldn’t possibly injure that many because there’s only 97 native Evenks living in Uchami. However, it did punch a big hole in the one-meter thick ice on the Podkamennaya Tunguska river and officials verified that at least one fragment is in it and will be searched for when the weather warms (one weekend in July).

And don’t forget the December 18 meteor which exploded near the Kamchatka peninsula with a force ten times more powerful than the Hiroshima atomic bomb yet wasn’t reported until months later, even though it probably measured up to 100 meters in diameter. Apparently there were no officials in the area to say “Nothing to worry about.”

Is there something to worry about? Is Siberia becoming some kind of meteor magnet?

Would YOU live there?

The Secret Surveillance of Princess Diana