If it’s springtime in the Northern Hemisphere, that means it’s time for crop circles to begin popping up in England and other places where there are large farms and people with time on their hands. Or extraterrestrials anxious to send messages using that sophisticated communications device known as the “field.” China is in the Northern Hemisphere, which makes the news from the Qinghai Province in the central northwest part of that country doubly puzzling. Instead of an overnight crop circle, residents discovered an ice circle carved into or painted on the ice covering Qinghai Lake, the largest salt lake in China. Ice messages on a salty lake? Have the aliens switching to sending messages via giant margaritas?

“On April 12th, a giant mysterious figure appeared on the ice on the south side of Haitai, Qinghai Lake Erlang Sword Festival. According to the photographer, Qing Xiu, Qinghai Lake Tourism Group Co., Ltd., the deputy general Heng Xiu introduced the picture was taken at 11 o'clock on the same day, the area is more than 100 square meters, the specific reasons for the unknown are unknown.”

“The specific reasons for the unknown are unknown.” Sounds like China News hired an ex-politician to write that description of a large circular picture on Qinghai Lake, a 4,489 sq. km (1,733 sq. mi) saline and alkaline lake located 3,205 m (10,515 ft) above sea level in a hollow of the Tibetan plateau. (You can see the photos of the ice circle from different angles here.) Before you ask … yes, it has a monster that People's Daily posted a photograph of with the explanation, “The monster in Qinghai Lake looks like a dragon.” It’s also near a cave containing the Baigong Pipes – out-of-place artifacts that appear to be 150,000 years old in what appears to be an artificially dug cavern with a triangular opening. Connect those dots and it spells “Aliens!” to some, but scientists say sandstone, iron-rich sediment brought by floods and hydrogen sulfide gas could have combined and hardened into iron pyrite formations resembling metallic pipes.

What were we talking about? Oh yeah, the ice circle. Speaking of strange theories …

“This China Ice Circle is depicting Earth’s halted orbit, pushed back 5 months from December, 2003 when it encountered Nibiru in its path. As the Last Weeks approach, Venus and the Dark Twin will escape the cup. This Ice Circle shows the past, current, and future status of these planets, but unquestionably shows the blocked orbit of Earth.”

The website Zetatalk.com thinks the small circles in the ice circle represent Earth and Nibiru. Comments on the video report on the  Ufomania YouTube page range from a magnetic motor to an automotive symbol to UFOs. None of them make any attempt to explain how the ice circle got there. The China News photo shows it to be near the edge of the ice (melting?) and the shore. There are some lines in the spaces of the circle, but no tracks inside or outside of it. While the brief story mentions the photographer belongs to a tourism group, it gives no indication how he got to the spot, how long it lasted, why sow few shots were taken, and what he thought it might be, other than the “reasons for the unknown are unknown.” 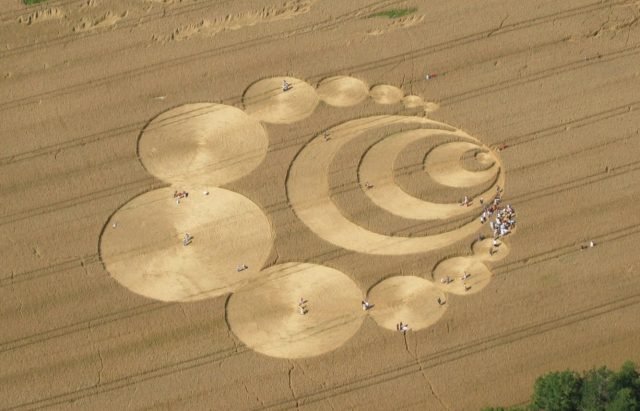 CGI? Possibly. A government cover-up of something it wants covered up? The Baigong Pipes are rumored to be alien artifacts (there are signs at the cave entrance saying they are) whose actual origin is protected by the government (not surprising – it’s China).

The website segnidalcielo.it gives the big reveal -- a drone video from the Facebook page of Mai Tian Quan that was purportedly made by an automotive company called AION which shows that the symbol is its logo. While it graphically displays the logo being placed on both the ice and in a field, the video gives no information on how they were actually made, leading many to believe the whole thing, including the pictures from the lake ice, are computer-generated.

If the ice circle is human made, it’s impressive. If the auto company has developed some kind of aerial technique for burning circles into ice and crops, that's even more impressive.

Not as impressive as aliens or the Baigong Pipes, but impressive.

Photographing a Zombified Man in Black