Mysterious UFOs Return to Manitowoc and the Lake Michigan Triangle

For those accustomed to short, blurry videos of alleged UFOs with little or no explanation of the location, circumstances, names of witnesses, amounts of adult beverages consumed, etc, a video posted this week of a UFO over Lake Michigan is a breath of fresh air … or at least as fresh as the air might be near a nuclear power plant. That’s just the first piece of data about a mysterious sighting in an area that has a history of UFO sightings, not to mention a legendary place of unexplained disappearances known as the Lake Michigan Triangle. Welcome to Manitowoc, Wisconsin.

“This short film explores witness testimony and video evidence for possibly the biggest UFO story of 2019. Stunning enhanced HD UFO footage, 8-bit granular audio analysis, dramatic recreation and the voices of witnesses take viewers deep into the night of March 24, 2019, when a massive UFO was recorded in the vicinity of a Wisconsin nuclear power plant by a trained observer with some help from his friends. Includes public testimony of U.S. Marine Corps veteran Myles Panosh.”

Newinsideout.com appears to be the exclusive source of this “exclusive short film” (watch it here) about a UFO sighting near the Point Beach Nuclear Plant made by Myles Panosh, who is also described as a UFO researcher, and Jeff Lavicka, who actually recorded the video of the multi-colored lights that they claimed were visible for from about 8:45 pm to about 11:30 pm.

“What the videos show include multi-colored lights appearing at the apexes of a seemingly opaque wedge-shaped “Star Destroyer”-like spacecraft attended periodically by additional luminous bodies in flight blinking on and off in the nearby field of view.”

Newinsideout.com names this the “Manitowoc Incident” and compares the lights to a “wedge-shaped “Star Destroyer-like spacecraft”" but does point out that UFO sightings over nuclear plants are common and generally unexplained. What’s more interesting is that it refers to another Lake Michigan UFO incident 25 years ago that the Detroit Free Press brought back recently because it’s still unsolved.

“On March 8, 1994, calls flooded 911 to report strange sightings in the night sky. The reports came in from all walks of life — from police and a meteorologist to residents of Michigan's many beach resorts. Hundreds of people witnessed what many insisted were UFOs — unidentified flying objects.”

The report details the many sightings over several days that included radar operators who picked up the objects, yet the 25th anniversary came and went without resolution. However, any search of Lake Michigan UFOs will pick up stories about the “Lake Michigan Triangle,” an area whose three points are Manitowoc, Wisconsin, Ludington, Michigan, and Benton Harbor, Michigan, and whose legendary reputation comes from many mysterious events, including the 1891 disappearance of a schooner named the Thomas Hume; the 1921 sinking of the Rosa Belle ship due to a collision, yet there were no other ships in the area; the bizarre 1937 disappearance of a ship’s captain from his cabin that was locked from the inside; and the 1950 disappearance of Northwest Airlines flight 2501, which was carrying 58 people and whose wreckage has never been found -- an incident some blame on a UFO. 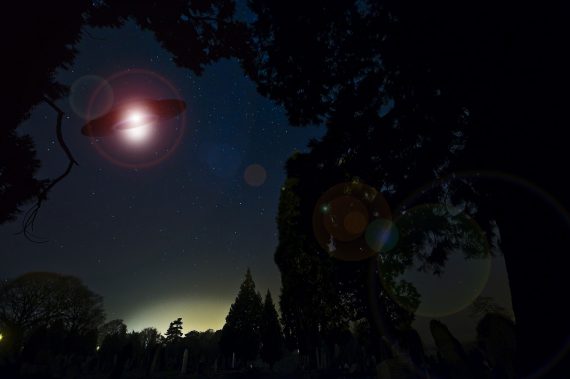 And now, more UFOs over a nuclear plant.

Newinsideout.com writer Jon Kelly points out that there have been groundwater leaks at the facility and ufologists believe UFOs over plants are manned by benevolent aliens watching to make sure humans don’t do anything stupid. (What are they waiting for? Asking for a friend.) Is the lack of any other coverage of the “Manitowoc Incident” a sign of a government cover-up? Is it another piece of the Lake Michigan Triangle puzzle?

Kudos to Newinsideout.com and the Detroit Free Press for keeping these mysterious sightings and incidents in the news. Will they nudge the powers-that-be to any sort of disclosure?

Has that EVER happened?

How Secret Information is Hidden, Pt. 2