One of the strangest natural phenomena I’ve had the pleasure of tracking here at MU has been incidents involving megacryometeors. These anomalous and isolated balls of ice appear to fall from cloudless skies for no apparent reason and have only begun to be recognized by the meteorological community as a genuine phenomenon.

Early last year, one was even caught on camera falling on a busy London street, missing a man by mere feet. While ice falling from airplanes passing overhead is usually suspected to be the cause, many of these icy meteors have fallen far from flight paths and the ice in these objects is clear, while airplane ice is typically blue. Whatever their cause is, one thing is clear: megacryometers are dangerous.

Case in point: a Colorado woman was terrified this week when an unidentified object crashed through her sunroof as she was driving down busy highway US 36 which passes between Denver and Boulder. Kay Jacobs Nordeen told local news station FOX31 Denver that given the size of the impact, she’s lucky to be alive. “Just a huge boom came crashing down. Boom, that's all I heard out of nowhere," Nordeen said. “My God, 2 seconds earlier this probably would have come through my windshield. I probably would have been dead or seriously hurt.” Nordeen swerved across the highway following the impact, causing several other vehicles to take evasive action. Luckily, noone was hurt in the ensuing chaos.

Nordeen found nothing in her car following the incident, leading her to suspect that whatever hit her car was likely made of ice. While snowstorms had been in the area the week prior, The Denver Post reports that the weather on the day of the incident was warm and mostly sunny. Could this have been another incident of a falling megacryometer? 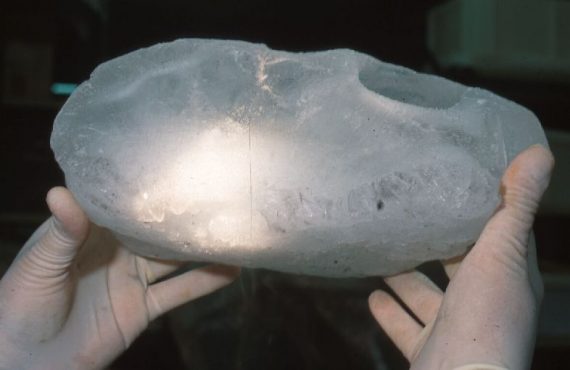 Ultimately, it’s likely impossible to determine as all evidence would have melted within minutes of the object crashing into the vehicle. The Denver-Aurora-Boulder Regional Transportation District is investigating the incident.

A History of Notre-Dame’s Crown of Thorns Relic