Let’s get the obvious out of the way first … Spikes of Methane would make a great name for a band. However, it would have to play really well to produce the excitement that real spikes of methane are generating amongst the space exploration community over an announcement by NASA that its Curiosity rover has detected definitive proof of methane on Mars with the discovery of two distinct surges of the life-related gas and it has pinpointed their locations for future missions to sniff, study and solve. Is this the missing stink?

“Here, we report a firm detection of 15.5 ± 2.5 ppb by volume of methane in the Martian atmosphere above Gale Crater on 16 June 2013, by the Planetary Fourier Spectrometer onboard Mars Express, one day after the in situ observation of a methane spike by the Curiosity rover.”

In a report published this week in Nature Geoscience and reviewed by Space.com, lead author Marco Giuranna of Rome’s Istituto Nazionale di Astrofisica in Rome announced that Curiosity found the methane in the large (96 mile (154 km) wide) Gale crater that many scientists believe was once a Martian lake. When the spike was confirmed in the atmosphere by the Mars Express orbiter a day later, this was the first ever multiple detections of a single methane presence on the planet. 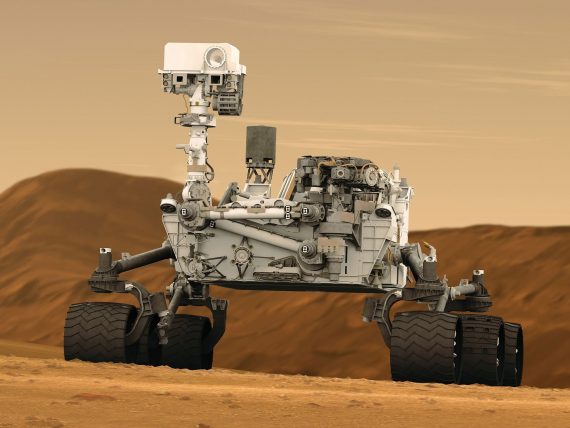 But wait … there’s more! Another spike was detected in the Gale crater in late 2013 which lasted into 2014, and the researchers were able to pinpoint the location of the June 2013 spike to a region about 310 miles (500 km) east of the Gale crater. All of these discoveries are the result of a new technique developed by Giuranna for analyzing data collected by the Mars Express' Planetary Fourier Spectrometer instrument (PFS), which has been sniffing Martian air since 2003 but whose discoveries have been doubted previously due to errors and malfunctions.

When Curiosity landed in the Gale crater in 2012, Giuranna began coordinating its sampling of Martian air with that of the Express. He and his team then divided the area in and around Gale into 250 km (155 miles) wide squares and used computer simulations to compute the probabilities of each one as the source of any methane plumes. In addition, they looked for geological features like faults that could have released the methane.

"Remarkably, we saw that the atmospheric simulation and geological assessment, performed independently of each other, suggested the same region of provenance of the methane, which is situated about 500 km east of Gale. This is very exciting and largely unexpected."

But … is this a sign of life on Mars? Being a good scientist, Giuranna admits this methane isn’t the smoking gas. It could still have been the result of a chemical reaction and there’s no way to determine if it was created recently or has been trapped underground for millions of years … yet. Curiosity and Mars Express have teamed up with the ExoMars methane-sniffing Trace Gas Orbiter (TGO) to collect and compare even more Martian methane data. Nothing is as easy as Elon Musk wants us to believe, says Giuranna.

"Follow-up is very important to better understand methane on Mars. We are collecting pieces of a puzzle and need more pieces to understand better what is going on."

In the meantime, the Spikes of Methane should continue practicing their covers of Bowie songs.

A Tale of a Trio of Skinny Creatures in Black