People have a hard time staying at one of the most haunted houses in Hull, England. In fact, nobody has lived in the house located at 39 De Grey Street since 2007. With children suddenly appearing from inside the walls and women getting strangled with their own scarves, this location is a hot spot for paranormal activity.

Other unexplained events that have happened at the house include chairs moving on their own, objects flying across the room, and candles suddenly getting blown out. Several mediums have visited the location and they claim that there are between 15 and 20 spirits of children who were there when it was used as a foster home. What’s even more disturbing is that the location is also home to several ghosts of the adults who supposedly killed the children.

Andy Yates has owned the home for over 20 years but says he’s too scared to live there, so instead he allows paranormal investigators visit the location in order to help him pay his mortgage. Yates lived in the house for eight years but had to move out because of the paranormal experiences he was having. “I’ve gone from being the biggest ghost skeptic to being one of the biggest believers,” he admitted.

He even tried renting it out to several families, but they couldn’t handle living there either. “More than four families tried to move in but none could stay more than a night because their kids were screaming in their rooms overnight, and some people couldn’t return after measuring the house up for furniture,” he said.

While Yates was living in the house, he experienced countless unexplained occurrences, such as the television remote moving from his chair to the opposite corner of the room; pictures that were pushed out of place; knives being moved in the kitchen; and even his cat would get scared and appeared to be looking at something Yates couldn’t see.

The thing that scared him the most was when he saw the ghost of a seven-year-old girl standing at the foot of his bed in the middle of the night. “I was asleep in bed but woke up about 3 A.M. to see something at the bottom of my bed,” he explained, “I thought that it must be a burglar that had got into my house, but when I looked closer I thought that it was a girl [standing] there that looked hazy and was around seven years old.” 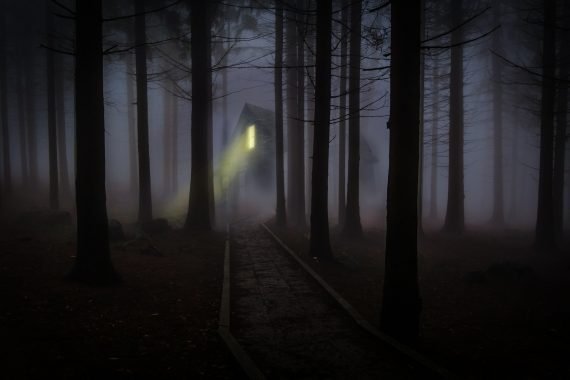 But when his partner got pregnant and the paranormal activity continued, that’s when he decided that it was time to move out and he has not lived there since. Since moving out, his home has become well-known for all of its ghostly activity and has caught the attention of many people wanting to visit his haunted house, including paranormal investigators, psychics, mediums, and others who are interested in the paranormal.

A Famous UFO Case? Or, a Military Test Gone Wrong?