The Amazing Story of the World’s Only Immortal Creature

Since time unremembered human beings have dreamed of immortality, and it has featured in many of our most profound legends and myths. For millennia we have tried magic, various herbs and potions, and in more modern times the power of medicine and DNA to prolong our lives, to stop the inexorable approach of death and indeed to live forever. Yet this must surely be an unobtainable goal, right? After all, nothing lives forever, and death is an immutable natural companion of life, unavoidable and inevitable, is it not? Well, not exactly, it seems, for there is one known organism on this planet of ours that truly has the capacity to live on indefinitely, effectively immortal and cheating the cycle of life and death. Welcome to the world of Earth’s only immortal animal.

The creature in question is one that you would probably not even typically notice, let alone realize how truly unique it is. Measuring only 4.5 millimeters (0.18 in) across and equally as long, about the same size as the nail of your pinky, and almost entirely transparent, it is a type of tiny jellyfish native to the Mediterranean Sea, although they have spread worldwide through the ballast of ships, called Turritopsis dohrnii, or more commonly called by its popular name the “immortal jellyfish.” Within its genus Turritopsis it is very similar in physical appearance with its cousins but special in that, of the three known species it shares the genus with, it is the only one that has proven to be technically immortal, able to quite possibly live forever.

In order to understand how this could possibly be, it is important to understand a little about the typical life cycle of jellyfish. Male jellyfish release free-floating sperm that drift with the current until they meet up with an egg from a female, after which tiny swimming larvae are formed, which are called planula. These planula meander about swimming through the sea until they are ready for the next stage of their development, sinking down to attach to something on the bottom, usually a rock. They then undergo a shocking transformation, completely reconfiguring into specialized colonies of tubular polyps that wave about in the current until tiny larva emerge to detach from the polyp tips and swim off to form fully-formed jellyfish, called the medusa, going on to mature into sexually mature adults to start the cycle all over again.

While there are variations in this basic cycle among different jellyfish species, typically most jellyfish will carry out their lives and die just like any other animal. However, the Turritopsis dohrnii is different in that it just won't conform to that standard way of nature. When faced with starvation, environmental stress, or mortal injury that would kill most normal jellyfish, they instead undergo a bizarre metamorphosis. They pull their tentacles into themselves and their bodies shrink, and to a casual observer it might seem as if they are indeed withering away and dying, but this could not be further from the truth. Instead, they are reversing time in a sense, turning back the biological clock and reprogramming their cells to revert back into their polyp state. After changing into a shapeless blob of tissue, they change back into a polyp colony, and a new jellyfish is born, completely genetically identical to the original, in essence skipping back in time to start over again. It is called “transdifferentiation,” and they can then repeat this very unique and amazing process again and again as needed, quite possibly forever, making them effectively immortal. One Dr Karl Kruszelnicki has explained it:

It's kind of like a butterfly that instead of dying changes back to a caterpillar, or an aged chicken turning back into an egg. It's not a blueprint for humans to use so that we could potentially cycle indefinitely between a baby and an aged adult, and then back to baby, and so on—forever. 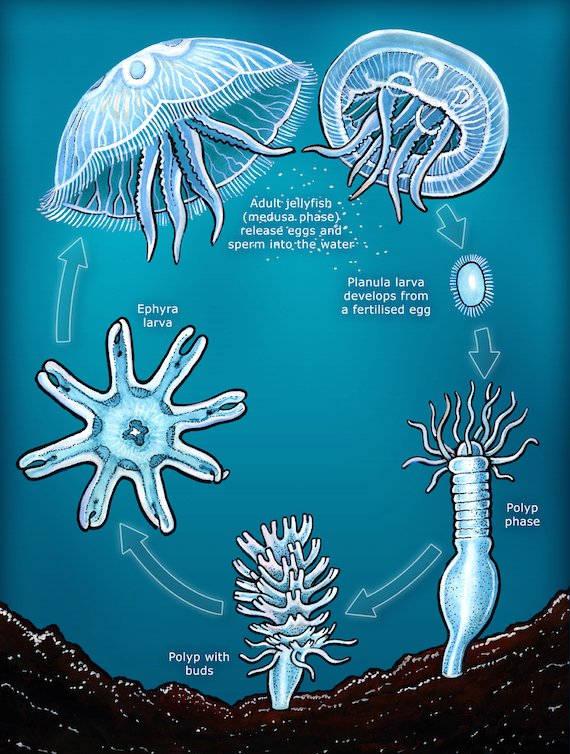 Turritopsis dohrnii only needs to do this when faced by damage or threats, because they also have the unique ability to revert their cells to a younger state at any time, meaning that they essentially don’t age and they can also reassign and reprogram cells to perform different functions as needed. This ability to halt aging or even reverse it does not mean that they cannot die, as being eaten by a predator or suffering a severe disease or a decisive catastrophic injury will kill them, but for all intents and purposes they are basically immortal, and no one is quite sure yet how they do it or what mechanisms are involved. We also don’t know yet if other species can pull off this incredible feat of eternal rejuvenation or if Turritopsis dohrnii is the only one, making it all a profound mystery of the natural world.

Whether it is completely unique or not, it is not difficult to see the potential this could all have on the field of medicine, and scientists have been intensely studying Turritopsis dohrnii for clues in deciphering how its eternal youth and ability to travel back to earlier life stages works. This is seen as being a potential key to the fountain of youth, perhaps extending life in human beings, offering possible ways to battle diseases such as cancer or Parkinson’s disease, or a means to revitalize or repair damaged tissue. The mystery might one day be solved, but in the meantime the world's only known immortal organism floats on through the water, keeping its secrets close and hovering on potentially forever, living the fantasy humans have had since we first even became conscious of our own mortality.

Beast of Cornwall? Many Sightings and Pet Attacks by Mysterious Big Black Cat