Lying out in the dim woods near Charlottesville, Virginia, at the end of a meandering dirt road winding under arches of ancient looking gnarled trees is a stately old house that is one of the oldest in the area. The land was originally acquired in 1724 by a Major Thomas Carr, better known as the brother-in-law of Thomas Jefferson himself, for unspecified “services to the crown,” after which the sprawling house, called Dunlora Mansion, more a large farmhouse really, was erected in 1730. After that the history seems to have been pretty mundane, just another rich person’s plantation estate, but perhaps because of its location tucked away in deep forest in the 1900s it began to accrue some interesting legends about it, and has earned itself a reputation as a witch's den full of ghosts, madness, and murder.

It was around this time the stories say that the Dunlora Mansion apparently was owned by a reclusive woman, who rumor had it was a nefarious witch. The area, which had been a popular site for camping in earlier times, gradually became a place to be avoided by around 1920, and there were numerous tales of people seeing strange things in the woods near the mansion. Shadow figures, strange rituals, mystery lights, these are just some of the oddities people reported seeing through the trees, and when the old woman died it apparently only got worse, her ghost supposedly roaming the area and vehemently chasing trespassers away. Adding to these spooky legends was the persistent claim that there was a weed-choked, overgrown graveyard nearby hidden amongst the trees that had been the final resting place of the previous owner’s slaves. 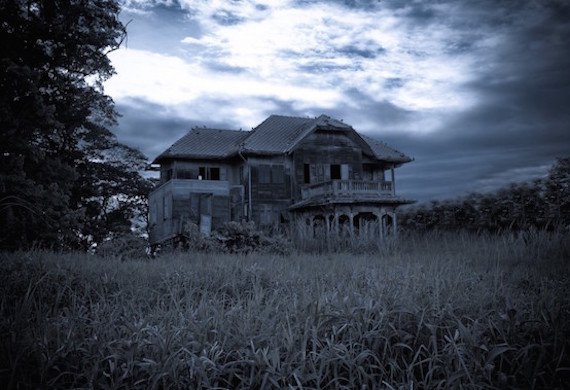 By far the most pervasive scary story attributed to Dunlora Mansion is that of a group of people who perhaps got a little closer than the legendary witch wanted. This apparently happened in the summer of 1920, when a group of six Boy Scouts and their Scout Leader were in the area on a camping excursion. They had not really been acquainted with all of the spooky lore surrounding the eerie place, and perhaps foolishly chose to set up their campsite right within the notorious, forlorn property of Dunlora Mansion. At first things were pretty normal, the group enjoying dinner and a quiet night while sitting around their campfire telling stories, but according to the tale, it was the last thing they would ever do.

It was the middle of the night when the Scout Leader was awoken by some sort of scratching sounds and what almost sounded like a grumbling noise coming from the vicinity of the boys’ tents. Thinking that it was maybe some wild animal prowling about or just the kids messing around, he got up, grabbed his flashlight and went out in the night to see what it was and to chase it off or to admonish his charges. When he got to the tents there was no sign of any animal, and indeed there was no sign of the boys either. The tents were empty, the flaps fluttering and rustling in the slight breeze, and all around there was a crushing quiet calm, his calls to them answered with silence. The stabs of light from his flashlight illuminated only the trees, nothing more, but at this point he was not yet scared as he figured they had wandered off to explore or were just pulling a practical joke. When he stalked off into the woods to find them he wasn’t really truly frightened yet, but he would be. 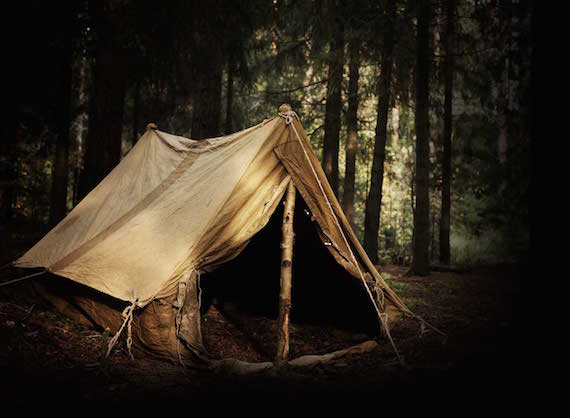 After some time of stumbling through the brush and trees, futilely calling out to the boys and not finding any sign of them, he purportedly noticed a light flickering off in the distance through the murk of night. Not knowing if it was perhaps the flashlight of the boys, he crept towards it, and soon found that the light was set within the looming shadow of an old decrepit house, feral and rotting away squatted there in the forest. He had found Dunlora Mansion, and trapped behind one of its cracked windows was this one, dancing light, as if cast by a candle, feeble yet defying the wind. It seemed as if the boys might have gone within its dusty walls to explore, but there was no response to their names being shouted repeatedly. In fact, no body seemed to be home at all despite that maddening glimmering candlelight that stood defiantly in that window. He went to knock on the door, only for it to go creaking open, totally unlocked and seemingly not having been locked in decades. He went inside.

The interior was every bit as unkempt and deteriorated as the outside, moldy furniture scattered about, a thick layer of grime upon the floor and a film of dust frosting everything, and it seemed as if it had not been lived in for some time. He did a search of the filthy old abandoned house and it was not until he was about to leave to go continue looking in the woods that he apparently heard what sounded like a child's voice coming from somewhere in the bowels of the house’s cellar. Having apparently never seen a horror movie before, the Scout Leader went right down those rickety, rotted out stairs to find himself in a wide open cinder block room draped in blackened shadows that almost seemed to cling to everything in there, only sluggishly banished by the flashlight. According to the version of the story he found either nothing or a single Boy Scout hat on the floor, but every version agrees on what happened next.

As he waved his light about trying to push back the stubborn veil of shadows, the beam apparently came about to cast upon the ancient looking face of an old woman standing there in that room with him, and what made it even worse was that she had an insane smile plastered upon her face, yellowed teeth sharpened into points. Was this the owner of the house or something else? The Scout Leader, very unsettled by this point, did not wait to find out, instead bolting right back up those stairs to go careening out back into that forbidding forest, regurgitated by the ominous house into the gloomy trees. According to the story, he then tripped over something in his path, his foot hitting it with a wet thud. It was no log or tree stump, but rather one of his missing Boy Scouts, lying there upon a mix of mud and blood, the stomach opened up like a zipper to reveal the entrails underneath. As the Scout Leader gasped in horror his beam illuminated a row of bodies, the other scouts all lined up and similarly disemboweled. 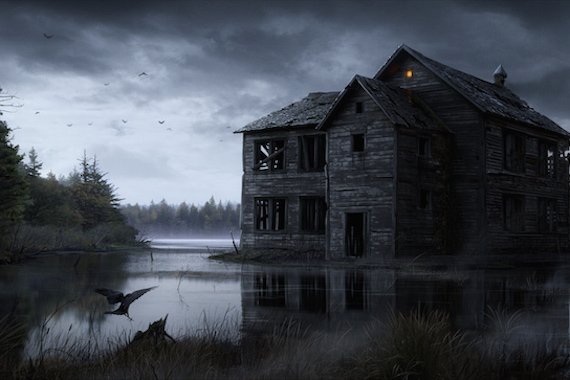 The police would purportedly find the Scout Leader the next day, lying half-conscious on the side of the road in a shocked stupor, and when they went to the campsite it turned out that all of the boys were back in their tents, yet just as dead as they had been the previous evening, some of their organs roasting over a dying campfire. The Scout Leader babbled on about what had happened but this was met with raised eyebrows and did not keep him from being arrested for murder and eventually committed to an insane asylum. In the meantime it is said that seven old, twisted trees would suddenly spring up in the area practically overnight where none had been before, supposedly conjured up to house the spirits of the dead scouts and the sanity of the their leader.

It is interesting that in more modern times the surrounding area has been somewhat developed into an upscale private residential district. It is mostly quiet except for the myriad seekers of macabre curiosity, who come snooping around hoping to see something supernatural, and a few have succeeded, coming away with tales of seeing the ghosts of the boys or even the witch herself. In one account posted on the site Saturnsmoons, the witness says that he and some friends went to investigate the area, and he explains:

It’s fairly easy to find the road you need. Dunlora is mostly known for being a rich neighborhood, but while you’re driving along the main road in the subdivision, there will be a road that clearly does not belong. It’s a gravely dirt road. I already had a sense of foreboding when we turned onto the road. As we continued our drive down the road, I spied a wispy translucent something at the top left of my windshield. It couldn’t have been a tree branch because the majority of the trees are bare, plus the last I checked, trees don’t grow wispy objects.

We eventually made it fairly far back when we came across two stone pillars on either side of the road ahead of us. Beyond these pillars was absolute darkness. Immediately we all had a reaction of SOMETHING not wanting us to be there. We all had this strong feeling at the same time. I immediately turned the truck around and we got the hell out of there. I wish we had gotten pictures but at that moment we all just wanted to leave. One of girls with me has friends who previously explored the area and they had the same feelings about the place that we did. On Tuesday evening we will be returning with a posse of people to explore.

I don’t normally get this way about places. My legs were shaking during the drive away from there. Whatever it could have possibly have been didn’t follow us because that feeling left after we got off that road. A part of me thinks that it was all in our imagination and there are rational explanations for everything while the other part of me knows there was something there that didn’t want us there. 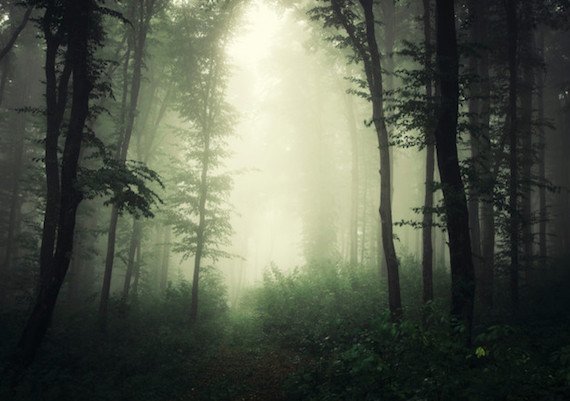 It is all an incredible story, but is there any truth to it or is this all an urban legend? Unfortunately there are many things that point to this possibly being the latter. Newspaper accounts and police records show no evidence of the Boy Scout murders that supposedly took place here. There is also the fact that the caretaker of the Dunlora Mansion, Kenny Taylor, has claimed that the same family has been in possession of the house since its construction, making one wonder where the mysterious witch comes into all of this or if she was a relative or not. The story also mostly took off when it was released onto the Internet in 2016 and went viral, meaning that there is a good chance this was a creepypastsa that sort of took on a life of its own. Yet there are still plenty of reports from people claiming to have been there and that all of this is true, so what are we to make of this? Whether it is merely a tall tale or there is something more to it, the Dunlora Mansion continues to draw thrill seekers in, much to the chagrin of locals looking to keep them out. Legend or not, it is an intriguing tale that will probably live on no matter what the truth may be.