The Mysterious Monster of Lake Superior

Sprawled out over a large portion of Canada and the northern United States is the magnificent Lake Superior, which being the largest freshwater lake in the world by surface area is more like an inland sea and more than earns it its name. The native Ojibwe tribe called it gichi-gami, meaning “Great Sea,” and besides its immense size, the lake holds its share of mysteries, and one of these is an enigmatic lake monster that supposedly has long called this place home.

The Native tribes of the area spoke in their legends of a giant and ferocious serpent inhabiting the lake that they called Mishipishu, meaning “underwater panther,” or also spelled as Michibeichu, represented in lore and in tribal pictographs as a fierce looking aquatic snake with spikes and spines, sometimes with a lion-like body. It was not known as being particularly friendly, dragging deer or whatever else came too close into the lake to never be seen again, and there were some areas that the tribesmen refused to go at all. If it became necessary to cross an area where it was said to lurk, then tobacco was apparently offered to it for safe passage, and there are even tales from missionaries of natives offering sacrifices to the creatures. However, far from an inhabitant of mere myth there have been sightings of something very bizarre and very large prowling these waters ever since, mostly describing the beast as being up to 75 feet or more long, with a whale-like tail, a reptilian, horse-like head, a long neck, and of a dark green or black color. 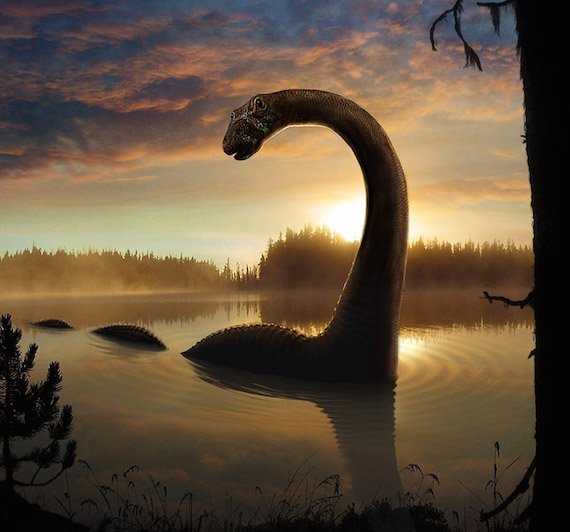 Many of the earliest reports of the Lake Superior monster by outsiders come from missionaries in the area going back all the way to the 17th century, with one of these missionaries, a Father Paul LeJeune, apparently witnessing the capture of a young specimen in the form of a lizard like fish around 10 feet long and with a head like a turtle. It was then promptly thrown back into the water by the tribe, as it was believed that to harm it would cause devastating storms. Many of the most well-known sightings begin in the 1890s, where a series of incidents occurred in quick succession. In 1894 two separate steamer crews traveling between Whitefish Point and Copper Harbor, Michigan, reported seeing a submerged monster with an arched back sticking out 7 feet out of the water. The following year, in July of 1895 there was another sighting at Whitefish Point, when a steamer crew spied “something hideous” cruising through the water with a 15-foot long neck and a huge jaw, that seemed to pace and follow their ship, perhaps even chasing it. In 1897 there was an even more harrowing account, when a man yachting near Duluth, Minnesota, fell overboard and claimed to have been attacked by the creature, which he said had tried to constrict him like a snake. The whole thing was apparently witnessed by three others aboard the yacht.

In later years there was a sighting in the 1930s of a giant lake serpent with coils of humps swimming off Pictured Rocks, Munising, Michigan, moving at a very fast pace and leaving considerable wakes behind it. In the 1960s there was an account given by a family who claimed to have seen an immense humped creature swim past the north coast of Sugar Island, and perhaps the most famous sighting of all supposedly happened in 1977, when it was encountered by a hiker named Randy Braun at the shoreline of a place called the Porcupine Mountains Wilderness State Park. On Memorial Day weekend of that year, Braun was hiking by the lakeshore when he says he saw something decidedly bizarre out in the water. He says:

When I looked straight out to open water I saw two very distinct dark bumps which seemed to be separated by just a few feet. First, one bump would go underwater then the next bump would do the same, but only after the first one surfaced. I had a 20x spotting scope with me and couldn’t quite make out what they were. Then they began to move east and to my left, one bump going under and then the other, but one bump always stayed on top of the water while the other submerged.

It became frightfully apparent to me that this object was close to one thousand feet out and as it gained speed I realized there was a third smaller bump, and that the object was undulating. It moved very rapidly “VERY RAPIDLY” to the east and quartered towards and nearly up to the shore. The now obviously living thing stopped maybe several hundred feet from me and began moving and weaving around large boulders that were in the water, and directly towards me. IT WAS BIG and resembled an anaconda with the girth of a Volkswagen. Don’t laugh it wasn’t funny.

There was no where to go for me because of the slippery slope and the water barriers so I jumped behind the boulder and grabbed by 35mm Yashica. As it moved towards me it slowed down considerably but was making a noticeable wake. It was strangely quiet while it snaked towards me and stopped dead in the water, right in front of me. IT WAS BIG! I steadied my camera on top of the rock and fired one picture but was afraid to move after that. The thing sat there for about thirty seconds with its huge horse shaped head and large dark left eye staring at me. On the nose was a visible catfish type whisker, maybe two feet in length and wiggling.

The picture he took is one of the very few actual photographs of the Lake Superior monster, now nicknamed “Pressie,” a merging of its Loch Ness cousin's nickname “Nessie,” and the Presque Isle River, one of its supposed favorite haunts. The picture is very blurry and indistinct, as such photos sadly seem to always be, but Braun has provided a sketch of what he believes it shows. What do you think the photo shows? Sightings have continued right up into even more modern times. In 1981 a group of teenagers and their younger siblings saw a gigantic serpent with 3 to 5 humps rise out of the water near the private beach they were on. Even more recently, in the 1990s, a group of fishermen allegedly saw the monster drag a wading buck deer underwater near Point Iroquois, Michigan, supposedly leaving the macabre sight of the animal’s severed head behind. Theories on what "Pressie" could be have ranged from some sort of prehistoric throwback, to a giant eel or snake, to just an outsized fish like a sturgeon, but none really seem to fit the descriptions and for now the monster of Lake Superior remains a mystery.