The Mysterious Moss Man of Florida

The thick swamps of Florida can be a spooky place to say the least, their tangles of cypress trees, vines, and brush clouded with mosquitoes and infested by all manner of insects and snakes, the murky, muddy waters prowled by alligators lying in wait for the unwary. When the sun goes down the swamp comes alive with sounds not always immediately identifiable, this symphony of the night punctuated with shrieks and squawks from unknown sources, casting this place further into an eerie ambiance that invites tales of strange monsters prowling its darkest recesses. One of these is supposedly a hulking thing that wades through the waters and crashes through all in its path, a glowing eyed beast known only as the Moss Man.

The creature in question gets its strange name from its rather unique appearance. Humanoid, bipedal, and somewhat ape-like in appearance and standing around 7 feet tall, it at first may sound like a hairy hominid such as Bigfoot, but the odd details make it all even stranger. The Moss Man earns its unusual name from the copious foliage and grass that seems to either grow upon it or to be intertwined and entangled with its hair, making it have a green cast to it and helping to camouflage it nearly perfectly, with some of the sightings saying that it was at first mistaken for an overgrown tree or log before it suddenly stood up to walk off through the swamp. The eyes are also said to glow an amber or reddish hue, with some reports even claiming that they have an almost hypnotic quality to them.

According to some local lore, the Moss Man had allegedly been encountered in these wetland wildernesses, since at least the 1800s. One such report from this era is that a “large man-like beast with a rank odor and covered with swamp grass” had been terrorizing the swamps in the area of Clay County and raiding rabbit pens and the livestock of residents, prompting a local sheriff called Sheriff Peeler to organize an armed posse of men expressly for the purpose of hunting it down. They apparently spent several weeks slogging through the muck dodging alligators and venomous snakes in search of it without success. Other strange reports of the time sometimes described fishermen being menaced or even attacked by an ape-like brute with leaves and branches covering it.

Another even earlier legend might have sprung from the presence of the creature. According to this particular tale, in the 1500s Spanish conquistadors supposedly raped, killed, and beheaded a local Native girl, subsequently tying her disembodied head to a tree and greatly angering the tribe. Their most powerful medicine man then used his magic to call upon the spirits of the swamp to seek out vengeance, after which the girls head grew to be a part of the wilderness and take on a human form of weeds, branches, and other vegetation, going on to hunt down any Spaniards she could find. In some versions of the story a witch doctor in later years created his own golem of foliage to keep the Spanish away, and that when this threat was gone it went off to continue to prowl the swamps to this day. 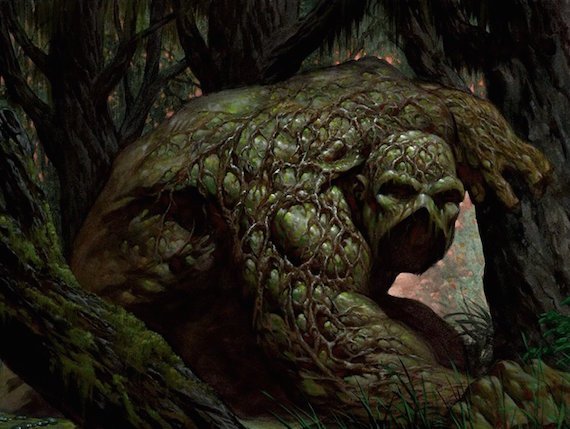 While these reports and legends are interesting, the Moss Man truly made its debut in the public consciousness in 1978. In this year a couple claimed that they had been taking a leisurely stroll along a beach in the city of Boca Raton, right up along the Everglades swampland, when they spotted something odd lying there upon the sand by a rocky outcropping. As they drew nearer they saw that it appeared to be a person in a raincoat sprawled out face down. However, as they passed it, what they had taken at first to be a man stood up to stare at them with baleful glowing red eyes and they could see that this was no human being. The interesting detail is that what they had thought was a raincoat was actually nothing of the sort, and was in fact what looked like a twisted mat of thick moss, grass, and leafy foliage. The couple apparently fled for their lives as it loomed there glaring at them with those fiery eyes. When they went back later to investigate there was apparently some Spanish Moss strewn about where the creature had been, but no sign of the beast itself.

When this report hit the news others began to come out of the woodwork with their own stories of spotting a similar massive bipedal creature with moss and leaf encrusted body, sometimes in the swamp and other times on the beach or even cavorting about within the waves, especially in the vicinities of Red Reef Park, West Palm Beach and Hillsboro Beach. The most famous of these reports comes from 1980, when an elderly couple was visiting Red Reef Park, a 67-acre coastal nature preserve. The couple purportedly had been hiking through the scenic area when they sighted a green object through the trees upon a branch. The woman approached, thinking that it was some wondrous swamp bird perched upon a mossy tree, but this “bird” then turned around and showed itself to be the fierce looking face of the Moss Man, the tree its enormous body. The terrified woman had apparently been so close at the time that she genuinely feared for her life, but the brutish creature turned back around and loped off into the wilderness. 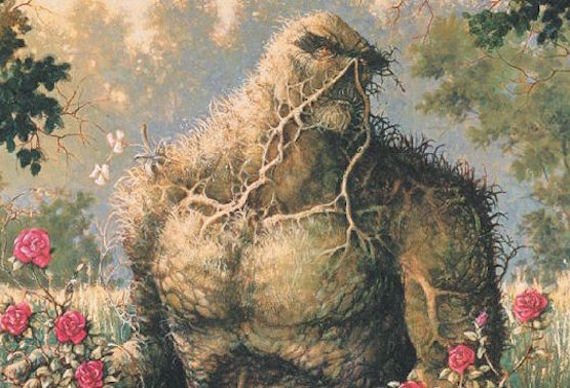 There have been sporadic sightings of the Moss Man ever since, with accounts variously describing what seems to be a flesh and blood animal or on other occasions claiming that the thing is more ghostly or demonic in nature, able to appear or disappear at will or to even shroud itself in a cloud of mist. Considering the details of the reports, theories have abounded on what the creature could be. Some are more along the lines that it is some sort of Bigfoot-like creature, either covered with vegetation that has grown upon it or intentionally covering itself with this foliage as a form of camouflage to allow it to blend into its environment. Other more far-out ideas are that this is some sort of humanoid plant, a forest spirit, an inter-dimensional entity, a demon, an alien, or an avatar of the swamp itself taking humanoid form. More rational explanations are that it is merely a trick of light on the trees, someone like a hunter in a camouflaged outfit called ghillie guit, or even that it is all pure myth and urban legend. What is this thing? Whatever it may be, the legend of the mysterious Moss Man lives on.