The Mysterious Russian Valley of Death

Out in the remote wastelands of the Siberian taiga of western Yakutia is a place virtually untouched by man and infused with deep mysteries. Here one can find the basin of the Vilyuy River, from which some very odd stories have trickled out from explorers going back through the centuries telling of anomalous domes of red metal jutting from the earth for unfathomable reasons. Making it all even more mysterious is that the domes are said to lie within a zone of strange phenomena that seems to willfully drive away life, silent and claiming the lives of anything that stays too long. Welcome to Russia's Valley of Death and its bizarre otherworldy mysteries.

These enormous structures are said to be like upside down cauldrons buried in the taiga, fashioned of some unknown metal and possessing sharp edges, and indeed the river Olguydach literally means “a place with cauldrons,” with the Yakutians calling the mysterious objects the olguis. Spoken of by the natives for hundreds of years and known by outsiders since at least the 19th century, these domes supposedly have openings on the top, through which one can venture into the murk within via smooth stairways that wind down to metal rooms that remain a pleasantly warm temperature even in the middle of the coldest winters. The metal itself is said to be impervious to harm, resisting all efforts to scratch or chip it, and it is always described as having an odd reddish hue and being completely smooth and without any blemishes.

The “cauldrons” have apparently long been feared by the locals, who believe them to be the homes of fierce, one-eyed giants, and numerous legends have gathered around them, such as that to sleep within one or even be near it is to invite all manner of physical ailments and even death. Indeed, local tribes steer well clear of the areas where these cauldrons exist, believing them to be imbued with some sort of malicious force, and it is often said that there are no animals to be found for miles around them, the air bereft of the normal sounds of the wilderness, like some barren alien world. Those who spend too much time meandering about near the cauldrons will drop dead it is said, and so many people were claimed to have died or vanished in the vicinity of these inscrutable domes that the whole region accrued the nickname Uliuiu Cherkechekh, which basically means “The Valley of Death.” Despite the air of legend and folklore this all has, at one time there were also many explorers who told of hearing of or even coming across these otherworldly spheres, such as one explorer by the name of R. Maak, who in 1853 said of them:

In Suntar [a Yakut settlement] I was told that in the upper reaches of the Viliuy there is a stream called Algy timirbit (which translates as “the large cauldron sank”) flowing into the Viliuy. Close to its bank in the forest, there is a gigantic cauldron made of copper. Its size is unknown as only the rim is visible above the ground, but several trees grow within it.

There were enough explorers to the area who claimed to have encountered these cauldrons, that when word of the structures began to trickle out of the inhospitable region there was genuine interest in finding and studying them. A few expeditions were launched into this vast region of forbidding wilderness, and while most of them were unsuccessful in locating any of the spheres, there were nevertheless continued sightings by outsiders. One Mikhail Koretsky claimed to have had quite a bit of success in finding them, saying he had been to the region three times in 1933, 1937, and 1947, and had seen seven of the spheres, of which he explains:

As for mysterious objects, there are probably a lot of them there, as in three seasons I saw seven of those ’cauldrons’. They all struck me as totally perplexing: for one thing, there was their size – between six and nine meters in diameter. Secondly, they were made of some strange metal. Everyone has written that they were made of copper, but I’m sure it isn’t copper. The thing is that even a sharpened cold chisel will not mark the ’cauldrons’ (we tried more than once). The metal doesn’t break off and can’t be hammered. On copper, a hammer would definitely have left noticeable dents. But this ’copper’ is covered over with a layer of some unknown material resembling emery. Yet it’s not an oxidation layer and not scale – it can’t be chipped or scratched, either.

We didn’t come across shafts going down into the ground with chambers. But I did note that the vegetation around the ’cauldrons’ is anomalous – totally different from what’s growing around. It’s more opulent: large-leaved burdock; very long withes; strange grass, one and a half or two times the height of a man. In one of the ’cauldrons’, the whole group of us (six people) spent the night. We didn’t sense anything bad, and we calmly left without any sort of unpleasant occurrences. Nobody fell seriously ill afterwards. Except that three months later, one of my friends lost all his hair. And on the left side of my head (the side I slept on), three small sore spots the size of match-heads appeared. I’ve tried to get rid of them all my life, but they’re still with me today.

None of our efforts to break off even a small piece from the strange ’cauldrons’ was successful. The only thing I did manage to bring away was a stone. Not an ordinary one, though: half of a perfect sphere, six centimeters in diameter. It was black in colour and bore no visible signs of having been worked, yet was very smooth as if polished. I picked it up from the ground inside one of those cauldrons.

I took my souvenir of Yakutia with me to the village of Samarka, Chuguyevka district, Primorsky region (the Soviet Far East), where my parents were living in 1933. I was laid up with nothing to do until my grandmother decided to build a house. We needed to put glass in the windows and there wasn’t a glass-cutter in the entire village. I tried scoring it with the edge of that half of a stone sphere, and it turned out to cut with amazing ease. After that, my find was often used like a diamond by all our relatives and friends. In 1937 I gave the stone to my grandfather, but that autumn he was arrested and taken to Magadan where he lived on without trial until 1968 and then died. Now no-one knows where my stone got to. 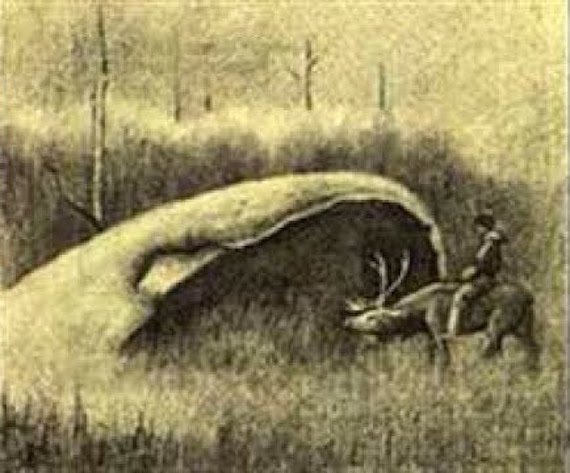 Some amount of success was also claimed by a geologist in 1936, who said that he had located one of the odd structures, but he was unable to find it again when he went back. Coming to later years, in 1971 there was a discovery made by a hunter who claimed to have found an immense metal sphere in the ground, within which he saw a trio of very thin, black skinned beings wearing some kind of metal armor. The man allegedly tried to get someone to go back with him to the spot, but unfortunately would die before anyone would, taking the secret of the cauldron’s location to the grave with him. Also in the 70s, in 1979 an archaeological expedition to the area was pointed to where some spheres were said to be by locals, and they found a promising spot, but the trees and vegetation were so incredibly thick that it was impossible to find anything and they went away empty handed. In fact, to this day no one has been able to successfully locate any of the enigmatic cauldrons, perhaps because they have sunken into the earth or been overgrown with vegetation, and they have remained a baffling and evasive oddity.

In the meantime, there have been some theories on what could be behind these stories. One is that these are evidence of extraterrestrial intelligence, built by aliens for reasons we may never understand or possibly as bunkers to protect from meteorite strikes. They could also be the result of some geological process such as collapsed ice-covered underground methane bubbles known as “pingos.” Another idea is they are simply the result of hallucinations caused by volcanic gasses in the area, which could also explain the negative health effects and mysterious deaths of the legends. Indeed, there are areas of the valley that have been found to have such high concentrations of gases such as hydrogen sulfide, carbon dioxide, sulphur dioxide, carbon disulphide, and other elements, that they accumulate large numbers of dead small birds and other animals and can be dangerous for human beings as well, causing headaches, dizziness, fever, and weakness. There are other valleys like this one in Russia as well, so this would not be unheard of, and could explain the legends of people or animals dropping dead, although whether that can explain the enormous spheres that people have long insisted are there is another story. 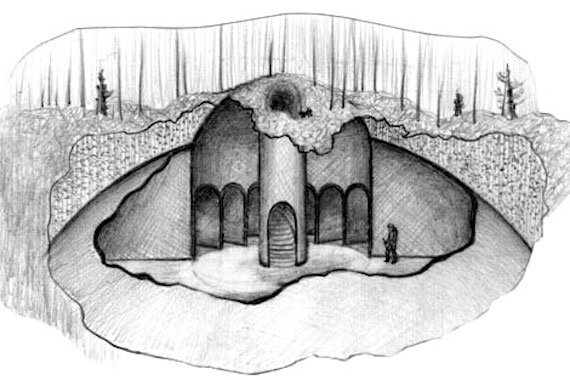 Speaking of mysterious places said to bring death and physical ailments, another is known simply as “The Devil’s Graveyard,” which is also supposedly located deep in the taiga wilderness in the Krasnoyarsk Region. Here there is said to be an expanse of blackened land littered with the carcasses of birds, small animals, and even cattle that herders foolishly tried to usher over this zone of foreboding. Birds are said to fly within the area only to flutter to the ground and die, and green plants placed over the black soil are said to visibly wither away to dry husks within minutes. People who try to walk through typically experience intense headaches, tooth pain, and nausea, forcing them to scurry back to safety. On occasion severe disorientation is experienced, with people lost for hours only to turn up again with no memory of where they have been. Unfortunately, the exact location of the anomaly is unknown, but it sounds very much like the Valley of Death, and could have its origins in volcanic gases or even radiation cast out by some fallen object in the ground such as a meteorite or even a UFO. Is there some link between this place and the Valley of Death, some answer to be found? Who knows?

For now the location of these places and the nature of the mysterious cauldrons remain impenetrable mysteries. Are they the result of alien artifacts or structures or is there something more to this all? Why are these places so inhospitable to life and deadly? Is there any link at all between the two? It's very probable we won't know unless someone finds one of these anomalous spheres, and until then the frigid fields of rough terrain will keep their secrets close.