UFOs Around the World: Brazil

Over the next several weeks, I’ll be conducting interviews with leading UFO researchers from countries around the world in an effort to paint a picture of global UFOlogy today.

Born in 1975 in Santa Cruz, Rio de Janeiro, Thiago Luiz Ticchetti has investigated more than 30 UFO cases over 25 years. For more than 10 years he was an active part of the Brazilian Entity for Extraterrestrial Studies (EBE-ET), becoming vice president of the organization. He has been part of Revista UFO magazine since 1997, where he started as a volunteer translator, becoming a consultant, international coordinator and eventually co-editor. He is currently responsible for the  magazine's monthly column, "Mundo Ufológico." Since 2019 he has held the position of president of the Brazilian Commission of Ufologists (CBU). In 2017 Thiago Luiz was appointed as Assistant to the International Director of Mutual UFO Network (MUFON) in Brazil and as a MUFON certified field researcher. Author of dozens of texts for the Revista UFO magazine, he has published nine books, including: UFO Crashes (2002), Guide to Extraterrestrial Typology (2014),  and Unusual World: The Log Book - Part 1 and 2 (2015). He is currently a columnist for UFO Truth Magazine. 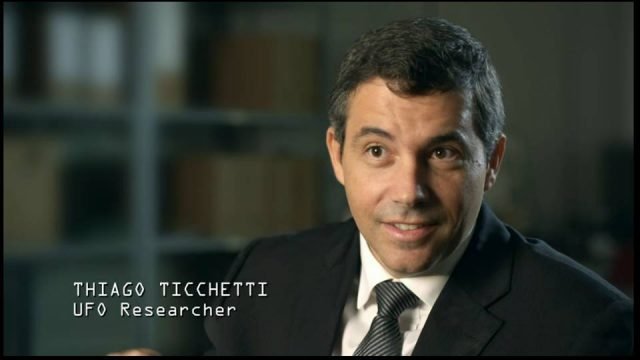 RG: Who have been the defining figures in Brazilian UFOlogy over the past 70 years?

TLT: Many ufologists have contributed positively to UFO research in Brazil over the last 70 years, but three in particular come to mind: Irene Granchi, Claudeir Covo, and A.J. Gevaerd. Irene and Claudeir, now deceased, practically lived for UFO research. Both were extremely serious researchers and used science to analyze the cases they investigated. They were real field researchers. Gevaerd is today, in my opinion, one of the most active ufologists in the world. Editor of UFO Magazine, an active publication for more than 30 years, he is an example for all ufologists in Brazil. His dedication and the seriousness with which he deals with UFO phenomena make him stand out as one of the greatest of all time.

RG: What do you consider to be the most compelling Brazilian UFO incident on record, and why?

TLT: There are many. It is difficult to choose just one. Brazil is one of the largest UFO hotspots in the world. We had “Official UFO Night” in 1986, when more than 20 UFOs were chased by military aircraft, spotted by ground witnesses and detected on radars in several cities. We had Operation Prato, a secret investigation by the Brazilian Air Force in 1977 that went to several cities in northern Brazil to investigate strange UFOs that fired lightning at people and sucked their blood in an event known as “chupa-chupa.” Hundreds of photos, many already released to the public, were taken, and dozens of hours of videos of these objects were captured by the military. These videos are still under the secrecy of the Brazilian government. But, undoubtedly, the most famous and important case in Brazil was the Varginha Case, when, in 1996, a UFO crashed in the city of Varginha, in the state of Minas Gerais, and its crew were seen by dozens of people before being captured by the military and city firefighters. The case became even more bizarre due to the death of a military man for reasons not yet clear after his physical contact with one of the extraterrestrial beings.

RG: What is the Brazilian government’s official stance on UFOs? When was the last time it issued a statement on the subject?

TLT: Unfortunately, the Brazilian government does not grant due importance to the subject. They have other, more “important” concerns. Brazil had in its hands a crashed UFO and its extraterrestrial crew and it handed them over to the US military.

The Brazilian government has never given any statements about UFOs. This subject is handled by the Brazilian air force, and the last time it was mentioned was in 2010, when the Brazilian Aerospace Defense Command (Comdabra) was issued the 551 / GC3 Report, which makes the command responsible for receiving and cataloging UFO notifications.

RG: Does the Brazilian Ministry of Defence have an official UFO investigations unit?

TLT: No. As I said earlier, the Brazilian government has no explicit interest in the issue. In 2013, the Brazilian Commission of Ufologists (CUB) met with representatives of the Army, Navy and Aeronautics in the Ministry of Defense to request the release of UFO reports still under the secrecy of the military. We left with the promise of a new meeting to define the creation of a civil-military group to investigate the phenomenon. Unfortunately this meeting never occurred, since the government of then-President Dilma Rousseff collapsed, which led to her impeachment.

RG: Has the Brazilian government shown more or less transparency on the UFO subject than the US government?

TLT: The Brazilian government does not reveal anything, as it is not questioned by the media about this issue. When something ufological happens and gains prominence through the press, the government is silent or disinterested. The only people who the government on the UFO issue are ufologists, and the answer, most of the time, is that there is no record of such a case. We have in our favor the Information Transparency Act, something similar to FOIA in the US, but we still do not believe that the Brazilian government is honest in its responses. We know the Government lies.

RG:  Does Brazil have a national UFO investigations organisation today, and how many smaller Brazilian UFO groups are you aware of?

TLT: Yes, we have the Brazilian Ufologists Commission, which at the national level seeks to receive and investigate UFO cases. I am the current president of CBU and we have had many interesting cases.

As for smaller groups, we now have about 20 to 30 groups that we know of and are active. We’ve had a lot more, just like independent ufologists. Today there are few ufologists who are field researchers. The vast majority prefer to make their comments in front of a computer screen.

RG: What are the most active regions of Brazil for UFO sighting reports?

TLT: Brazil as a whole is a UFO hotspot. We are a continental country, a mixture of races and cultures. But based on the cases we have received, the states of Minas Gerais, São Paulo and the north, northeast, and central-west regions are the ones that have the most records.

TLT: Yes, in 1982, when I was 8 years old. I lived in Rio de Janeiro and I saw a red light appear in the sky and slowly descend to a mountain. A while later the light began to rise, became brighter, made a pendulum movement and fired into space.

RG: After 25 years in the UFO field, what conclusions, if any, have you drawn about the underlying nature of UFO phenomena?

TLT: I have not yet come to conclusion about the precise nature of the phenomenon. What I'm sure is that we are being visited by intelligent beings aboard aircraft with technology far beyond ours. The main question is not whether we are alone in the universe, because I already know for sure. What we have to answer is who these beings are, where they come from and what they want.

RG: How can Brazilian UFOlogy better itself?

TLT: We need new ufologists, people capable of devoting much of their lives to ufological research, but, most of all, whether they be field researchers, detectives, or journalists, we need people who go after the facts directly; people who spend more time out in the field than in front of their computer screen.

The Mysterious Russian Valley of Death