Alleged Area 51 Secret Underground Base is Actually Something Cool

An interesting story has been making the rounds about an alleged never-before-detected underground base near Area 51 picked up on a Zoom.Earth satellite map. It’s Area 51 so it certainly is a plausible idea. Even more interesting was the rapid rebuttal by another website which revealed what this huge expanse of puzzling ground surface actually is – a giant art project! Really!

“I found something in Area 51 that appears to be a newly-built underground base. But why would the US government need another underground base there? I’m not using Google Maps, because they block out a lot of stuff. Look at this facility, it is really quite incredible.”

This analysis is part of the audio presented by Scott Waring on a YouTube video associated with his revamped ET Data Base site (formerly Ufo Sightings Daily). Always controversial for his far-fetched assurances that the photos he posts are actual alien bases, actual alien spacecrafts, actual aliens and the like, the site is entertaining for both his vivid imagination and the occasional tidbit of reality. We have both here with his proposal that this surface anomaly located 55 miles to the north-east of Area 51’s official perimeter is some sort of underground base under construction that, in order to make this idea plausible, is on “private government land.” (Zoom.Earth image) (Google Earth image) 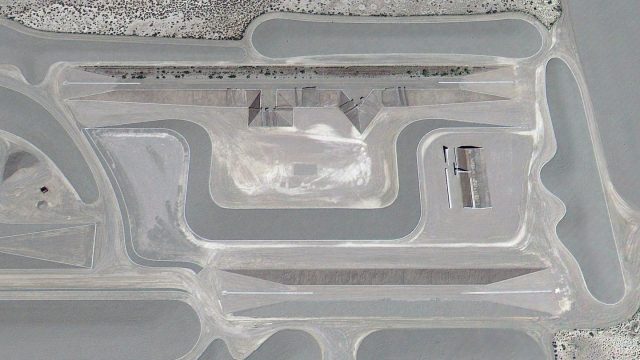 But the actual explanation for the anomaly is even better, more imaginative ... and real.

“As long as you're going to make a sculpture, why not make one that competes with a 747, or the Empire State Building, or the Golden Gate Bridge.”
- Michael Heizer

If you’re going to think big, artist Michael Heizer would be a great role model. He’s a pioneer of a contemporary form known as Land Art in which he makes massive surface sculptures using earth-moving equipment. Are you figuring this out yet? A few YouTube commenters and Tyler Rogoway at The Drive pointed out that the image in the Zoom.Earth photo is ‘City’ – a project Heizer has been working on since 1972.

“City comprises five phases, each consisting of a number of structures referred to as complexes, and in total measuring approximately a 1/4 mile in width and a 1-1/2 miles in length.”

As described on Heizer’s website, City was inspired in part by Native American traditions of mound-building and the ancient cities of Central and South America. Located in Garden Valley in Nevada’s Lincoln County – the same county where Area 51 resides -- it was initially self-funded but is now getting money from multiple foundations and is scheduled to be completed in 2020.

If you’re looking for a conspiracy associated with City, here’s the closest you’ll get. Garden Valley has long been attractive to the federal government as a location for rail lines connecting secret missile silos or the proposed Yucca Mountain Repository for nuclear waste – acquisitions of land which would have prompted Heizer to put an end to City. However, in 2014, then U.S. Senator Harry Reid of Nevada (of the Pentagon UFO study fame) introduced the “Garden Valley Withdrawal Act” to preserve the land around City. In 2015, a group of top American museums joined together to urge preservation of the area and in that same year, the area became part of the newly-created Basin and Range National Monument, thus protecting it from development – federal, military, alien or otherwise.

Was Harry Reid protecting City or possibly hiding something else? Scott?

A Self-Aware Internet and a Real-Life Matrix?