The cold northern domain of the U.S. state of Alaska is a place of great natural splendor and wonder. It is a place of endless vistas of mountains, tundras, and forests, sparsely populated and pristine. Yet these expanses of wilds are supposedly home to some strange beasts indeed. It is well known that Bigfoot supposedly makes its home here, but there are other bizarre denizens are also said to inhabit this frigid place, and here is a selection of some of the weirder Alaskan monsters.

One very unusual type of encounter seems to be with some variety of what can only be described as “Dogmen” in these remote wilds of the far north. In one account from Dogman Encounters we have a witness called Melissa H., who says she was in Matanuska Valley County, AK at the time of her brush with the bizarre, on her way home from work in the wee hours of morning. The route was apparently a long and winding one, on the northern-most section of Trunk Road between the towns of Palmer and Wasilla, meandering through about 100 miles of frigid wilderness where one could drive all night and not see a single other car.

At the time she had been about 10 minutes from home at around 2 AM on a cold October night in 1998, and she was taking things slow out of wariness of ice on the road, and at one point she saw looming up into the faint illumination of her headlights ahead a dark, very tall figure. She at first took it to be a moose but as she slowed down and drew closer she could see that it was in fact standing upright on two legs, and she could also see that it was too slim to be a bear and had “spikes running down its neck and back.” She says of what happened next:

I could clearly see its wolfish muzzle, large, upright ears; the ‘spikes’ on its back were in fact clumps of fur. Its spine curved in a smooth, very natural-looking way. It was standing in the ditch, inches from the pavement. Because I was focused on its upper body, I do not recall anything about its back legs or if it had a tail. I did see its front legs, though; very ‘doggy’ looking, hanging awkwardly down and slightly toward its front, exactly as you’d expect if a dog stood upright. While it clearly had a canine look, there was still something ‘off’ about it that I cannot articulate. It was perfectly still, and at this point, given the proximity to Halloween, I was quite convinced it was some sort of Halloween prop because it was clearly not any kind of existing animal. I was deeply impressed and gently stepped on the brakes, intending to stop and examine it closely. Then it turned its head towards me.

In the tiny fraction of a second that it took for it to swivel its head, I knew I had made a terrible mistake. The fluidness of its movement removed any and all doubt that this was some kind of prop. It was horribly, terrifyingly alive. The pale, off-white glow of its eyeshine in the headlights destroyed any possibility of a human in a costume. I think I sat there gaping at it in shock for a few seconds, the car barely moving by now, but still inching closer. As I was almost upon it—I think it could have leaned forward and touched the car if it had wanted—I had to look up to see its face; again I’m a bad judge of such things, but I am 5’4″ and it was a hell of a lot taller than me. Tall like a polar bear standing. 7 feet? 8? I really can’t say. I snapped out of my trance and slammed on the gas. The car fishtailed and I prepared myself for death-by-monster, as I was certain I’d end up in the ditch, but the tires caught the pavement and I drove like a complete maniac all the way home. I did not look back.

This clearly was not any ordinary Bigfoot, so what did this woman encounter out there on that lonely stretch of twisting, untamed road? Was this one of the notorious Dogmen sighted all over the world? Was it some kind of werewolf or shapeshifter? Was it just her imagination playing tricks on her? It is uncertain, but it is a terrifying account all the same. Another strange type of Alaskan mystery creature similar to Bigfoot but seemingly quite unique is creature from the southwest portion of the state near Lake Illiamna, and which is variously referred to as the Arulataq, Bushman, Big Man, Tent Monster, Nant'ina, or most commonly the Urayuli, which translates to simply “Hairy Man.”

In appearance it is said to look very much like the traditional image of a Bigfoot, standing 7 to 10 feet tall, sometimes as tall as 14 feet, and covered with shaggy hair, its features often said to be very apelike. However, the Urayuli has freakishly long arms that reach down to its ankles and glowing red eyes. The beast is allegedly very adept at swimming, and has been blamed for stealing livestock and pets over the years, as well as raiding campsites or stealing fish from fishermen. Alleged tracks of the Urayuli have been sporadically found, almost always near water, and there was even a supposed photograph of one standing on a mountain ridge taken by a hunting guide in 1982 near the city of Dillingham. What is the Urayuli? Is it some species of Bigfoot-like monster or maybe even something stranger altogether?

Alaska has also had its share of mysterious water beasts, and one of these is a monster that supposedly lurks around Alaska’s Kodiak Island, off the south coast. One of the first modern sightings which put the creature on the map occurred in April of 1969, when the shrimp boat the Mylark was running a sonar scan of the bottom when they made a peculiar finding. It seemed that there sitting on the bottom in a little over 300 feet of water was a vast, dinosaur-like beast with a clear outline of a finned, long-necked body. The stunned crew watched the sonar reading but the thing remained motionless, after which they passed and lost sight of it. Mylark skipper Chet Petersen would later estimate that the strange object measured around 200 feet long, and the photo they took of the readings made front page news in outlets such as the Kodiak Daily Mirror.

Another notable sighting of the Kodiak Island monster was made in the summer of 1971, when a fishing crew spotted an odd marine creature of some sort measuring around 30 feet long and with a head like a horse. One of the crew allegedly fired at it with a rifle, after which it dove under water and swan directly under their skiff as the entire crew looked on with fascination and shock before resurfacing on the other side to swim off. One of the crew members, an Eddie Pakkanin, would say of it:

We don’t know what it was, but it had a grayish color and we couldn’t see any fins or any tail and it never made any noise. It would just come up and you could see the head and part of the body.

According to the witnesses, the same creature would appear for several more days, always near shore and at around 2 PM each time, and it was even photographed, with the picture featuring in an issue of the magazine Elwani. An even more recent sighting occurred in 2002, when a fishing skiff was off the west coast of Kodiak Island at a place called Uganik Bay at around 4 AM. Some of the fishermen were pulling in their nets when a bizarre creature poked its head up above the waves some distance away. Although it was very early in the morning it was still light enough out for them to make out some details, and crewmember Tollef Monsen would say:

There’s this neck and head, and it wasn’t like your hands around the neck big, it was like your arms around the neck big. I saw it do its movements, but I couldn’t tell you if the neck was a foot in diameter or three feet in diameter. It was all darkish but I was paying attention to driving the skiff. It didn’t really focus on us. It didn’t look at us, it didn’t make eye contact, no. And whatever it was didn’t stick around. In a few seconds it was gone, back under the water. I mean we were so tired that it was like, did I just see that? Did we just see that?

Interestingly, Monsen would have another encounter with possibly the same beast the following summer, when he says something rammed into their boat from below on a calm and sunny day. It apparently was hard enough to almost knock him overboard, and there were reportedly no whales in the area that could account for it. He would say, “It was big, like a log (hitting the skiff). But nothing goes DONG! and lurches this big old skiff like that. I don’t know what that was either.” Was this the same creature or something else? 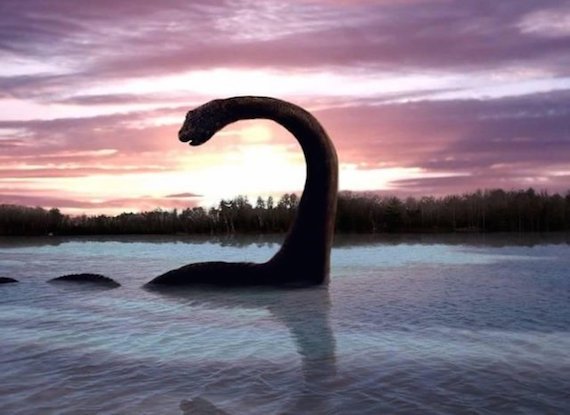 Perhaps even weirder than the Kodiak Island sea monster is a sighting from 1999 of what can only be described as some sort of giant, sea-going platypus off the coast near Mountain Point, AK. The sighting was first chronicled by cryptozoologist Chad Arment, after which it went on to be published in Karl Shuker’s book Extraordinary Animals Revisited,  and it is every bit as odd as you might imagine. Rob Alley, author of Raincoast Sasquatch: The Bigfoot / Sasquatch Records of Southeast Alaska, Coastal British Columbia & Northwest Washington from Puget Sound to Yakutat (2003), would interview the witness, and says of the encounter:

Several years ago Mike F., a successful Ketchikan businessman, contractor and retired fisherman asked me…whether I had ever studied or read anything about platypuses in North America, specifically whether I knew of any prehistoric giant forms. [Later he told me] that as a young man forty or so years ago he had stood on shore near Mountain Point south of Ketchikan and spent a minute watching an animal in the water at very close range that simply resembled a giant platypus. He described the creature as dark with a bill and feet like a platypus only the overall size was six feet or possibly greater. He gave no mention of the tail if there was one. The sighting was in shallow water on a rocky shoreline and the creature was close to the surface. The man is an experienced commercial fisherman and stated categorically that it was not a known species of seal. Ocean temp here doesn’t vary much from 50 degrees.

What could this have possibly been? You might recognize a platypus as not being something found in Alaskan waters and not as getting even near the size reported, so what could it have been? Some sort of pinniped? A misidentified known animal? What? It is unknown, and that is the frustrating part of all of these reports. We simply can't be sure of what is going on in any of these cases, or what could have made these people report what they did, and so the mystery lives on, and perhaps these creatures are still out there stalking these frozen badlands.