In the past week, The New York Times lent credibility to the search for UFOs by publishing the names and accounts of military pilots who risk their jobs and reputations by telling their stories in the paper which carries “All the news that’s fit to print.” Because of its reputation, more people now believe that the pill-shaped, high-speed objects these pilots saw are real. Would you feel the same if The New York Times published the accounts of scientists who say they have evidence of the existence of a 50-foot-long serpentine sea monster in a lake in British Columbia? A group in Canada does and they’ve renewed the search for the Cadborosaurus or Cadboro Bay Sea Monster. Does the Times have a reporter embedded with the group?

“The only ones we’ve ever had possession of, including the 1937 Naden Harbour, Haida Gwaii carcass, has tended to look more mammal even though it’s rather serpentine in aspect. Cadborosaurus is a generic title that applies to all of them, but in recent years we’ve felt the mammal type found at Naden Harbour is what we’re going to call Cadborosaurus because it by far matches the description of the majority of witnesses.”

John Kirk, the co-founder and treasurer of the British Columbia Scientific Cryptozoology Club (BCSCC), told the Vancouver Island Free Daily that there have been hundreds of sightings of this mythical cryptid -- which is considered to be different than the other famous Canadian mythical cryptid, the Ogopogo – dating back to early First Nation accounts in both Alaska and Canada. With so many in Cadboro Bay near the southern tip of Vancouver Island and with so many descriptions resembling a lizard or reptile, it picked up the scientific-sounding name Cadborosaurus. The “1937 Naden Harbour, Haida Gwaii carcass” Kirk mentions is a dead carcass, captured in a famous black-and-white photo, that was pulled out of a dead whale. While some thought it was a fetal baleen whale, there was insufficient evidence and Caddy mania returned to British Columbia. (Photos and illustrations of Caddy can be seen here.)

“Their paper deduces that Caddy is 40 to 50 feet long as an adult, 10 to 15 feet long as a juvenile, has flippers, inhabits deep water, but comes to shallower areas to mate, and "embodies major characteristics of both Reptilia and Mammalia, but is not clearly classifiable within existing subcategories of either."

In 1992, The New York Times reported on a paper by Edward Bousfield, a zoologist, and Paul LeBlond, an oceanographer, that presented a scientific argument for the existence of the Cadborosaurus. Their evidence -- later presented in greater detail in their book, Cadborosaurus: Survivor from the Deep – looks at nearly 200 reported sightings dating back to 1881, almost a dozen strandings or captures of strange creatures and First Nation petroglyphs of unusual marine creatures. Bousfield said at the time that the fact that a Caddy-type creature had been sighted in multiple lakes implied that a young creature, swimming upstream in the Columbia River to mate, got trapped by a dam and became the Caddy that was seen by many and possible fathered (or mothered) many of the others that were seen, caught or washed ashore dead. 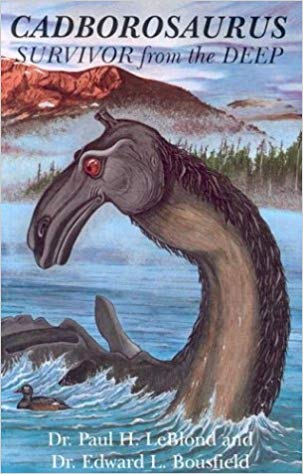 What about all of those carcasses? Those that were not too decomposed were eventually identified as sea lions, basking sharks, pipefish or other known creatures. As with Ogopogo and the Loch Ness Monster, no skeletons, DNA or other physical evidence proving the existence of a Cadborosaurus have been found. That includes a video of a Caddy-like creature taken in 2009 by a fisherman in Nushagak Bay, Alaska.

“We don’t want to prove this to anybody except for our own personal satisfaction, to ensure they are catalogued and their habitats are conserved. We certainly wouldn’t want the Cadborosaurus species to die off.”

John Kirk and fellow members of the British Columbia Scientific Cryptozoology Club are undeterred and planning a new search for Caddy. They have cameras running 24/7 but the Vancouver Island Free Daily doesn’t say if they have a new approach to finding a Cadborosaurus.

Perhaps they’re waiting for a crew from The New York Times.

Flying Saucers, the Men in Black, and Mysterious Cars