Conspiracies and the Very Weird Murder of Jonathan Luna

Some deaths are doomed to remain unsolved and to flit about past the periphery of all our attempts to understand them. In many of these cases there is also a true air of conspiracy, and of nefarious parties out on the fringe, which remain unseen and spectral, only serving to drive the whole thing deeper into the quagmire of mystery. One of these would certainly be the death of a well-liked and respected lawyer, who would suddenly turn up dead in the most bizarre of fashions without rhyme or reason and leaving a trail of oddness that has never been followed to the end.

Jonathan Luna’s story starts as one of hope and a successful struggle against the odds. Born on October 21, 1965, Luna grew up in a rough neighborhood of the South Bronx, New York City, along with his black mother and Filipino father. His family had always struggled, and he dreamed of going to college and graduating to make something of himself, of defying the hand dealt to him, finally being accepted into Fordham University, from which he graduated with a degree in history, and later the University of North Carolina at Chapel Hill, where he pursued studies in law. Upon getting his degree in law, he managed to get a job with the prestigious Arnold & Porter law firm in Washington D.C., before getting a job with the Federal Trade Commission and then going on to become a hotshot prosecutor in Brooklyn and then an Assistant United States Attorney in Baltimore, Maryland, where he specialized in cases against sexual predators, getting married to the woman of his dreams and having two children along the way. It seemed life had worked out pretty well for Luna, and that he had managed to achieve his childhood dreams, but dark clouds were on the horizon.

In December of 2003, Luna was in the midst of a major drug case against two men named Walter O. Poindexter and Deon Lionel Smith, who were accused of selling heroine from the studio of their music label Slash House Records, in Baltimore, and one of the suspects was also under suspicion of murder. On the evening of December 4, 2003, Luna called his co-worker at around 9PM after having spent the entire day working on the case, and left a voice mail saying that he would be leaving the office shortly to continue working on it at home. Records would later show that he actually did not leave the office until 11:38 PM, but he would never make it home.

At 5:30 AM the next day, an employee of Senseing & Weaver Well Drilling came across Luna’s car at a creek in Denver, PA, with its engine still running and what appeared to be blood smeared on the front of the car and driver’s side door. When the employee examined the vehicle he found there to be a puddle of blood on the backseat passenger seat on the driver’s side as well, and there was oddly found to be $200 in bills scattered around. He would call over a co-worker and they would make a gruesome discovery with the site of Luna lying face down in the mud of the nearby creek and very dead. Authorities were notified and they would soon learn that he had been stabbed over 30 times with a pocket knife found nearby, and that his throat had been slit and his hands and arms adorned with numerous wounds that were thought to be defensive in nature. His head also had a wound on it, although its origin was unknown. Police would then begin trying to piece together what had happened and it would only get stranger from there.

It was found that Luna had left his phone and glasses in the office parking garage, which was already a bit odd since it was known that he had needed his eyeglasses to drive or to really do anything at all. He had then driven on the I-95 into Delaware, passing three toll interchanges before entering Delaware at approximately 1 AM, after which he had withdrawn $200 from his bank account at an ATM and continued on to Pennsylvania, arriving at 4 AM, around 95 miles from his starting point. Oddly, a toll ticket with blood on it seemed to suggest that he had somehow been injured at some point along the way. He had then parked his car at the Sensenig & Weaver Well Drilling, after which it had been pushed at some time into the woods by the creek. Of what had happened to Luna between 4 AM and 5:30 AM, when the body was found, no one had a clue. 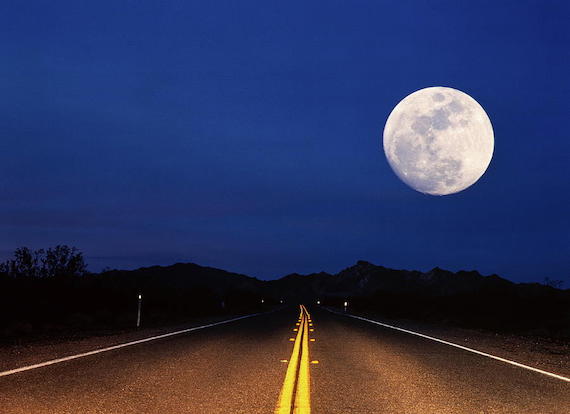 Considering the horrific state of the body this seemed to be a homicide pure and simple, and that was what the Lancaster County coroner originally ruled. It was speculated that he had been kidnapped in that parking garage and driven over to Pennsylvania for reasons unknown before being killed by stabbing and drowning in the creek. This was backed up by the fact that it was not thought he could drive all of that way on his own without his glasses, and it also explained the large amount of blood on the passenger seat, which suggested he had been driven there, as well as the numerous defensive wounds found on his hands and wrists, stab wounds on the back, and even an unidentified fingerprint and unknown blood found in the vehicle. It was odd that he would have been taken so far away to be killed and there was no suspect, but for the most part it was assumed to be an obvious murder, yet unbelievably other official theories began to emerge.

When the FBI started to get involved there was a new theory put forward in that they believed that Luna had actually committed suicide, even going as far as to ask the coroners to change their official stance. It was a rather baffling new approach to what seemed to obviously be a homicide, but the suicide angle was still pursued by the feds. It was claimed that Luna exhibited many shallow cuts consistent with what are called “hesitation wounds,” meaning the victim is hesitant to actually make the cut deep enough to kill, although the coroner disagreed and insisted that these were actually “consistent with torture.” The FBI thought differently, deeming a pocket knife to be a weapon inconsistent with a murder and more in line with a suicide. What?

As to why this well-respected and successful attorney would want to commit suicide in the first place, it was pointed out that Luna had been involved in a bank robbery case the year before, in which $36,000 had gone missing and after which he had suddenly and mysteriously come into possession of a large amount of money. Indeed, Luna had actually been scheduled to take a polygraph test in relation to the case before his death and is rumored to have been an actual suspect. It had also been found that Luna had had a bit of a secret life that his family did not know about, with his name found on an Internet dating site, a secret charge card his wife had not known about in his possession, and he had accumulated $25,000 in credit card debt. It was also suggested that Luna had been having problems at work and with handling the case he was on, and all of this added up was seen as more than enough reason for why he would want to kill himself. There were even offshoot theories that he had been planning to fake a kidnapping and assault and that it had somehow gone too far, although this was never seriously pursued.

Although it seems absurd to think that this well-liked and by all accounts upbeat and stable, successful individual would drive out to Pennsylvania to stab himself over three dozen times with a pocket knife, leave blood in the passenger seat and then toss himself into the river to drown, and despite the fact that the local Lancaster County authorities and coroners stood by their ruling of homicide, the FBI nevertheless clung to their official stance that it was a suicide. Indeed, as far as the federal authorities are concerned the case is closed, much to the outrage of Luna’s co-workers, friends, and family, who have deemed it all a well-timed hit job on Luna’s reputation.

Is that what this was? Was this an attempt to smear Luna's reputation, and if so why? What had he gotten involved with that would warrant such drastic action on the part of the feds? The mysterious case has left all manner of questions swirling about it. Was he murdered? If that is the case then who was it, what was their motive, and why go through such a sloppy, round about way of doing it by driving him to another state and stabbing him to death with a pocket knife of all things? Come to think of it, why didn't they take the cash that was lying around in the car why they were at it? Was this death a suicide, as the FBI has claimed? If so, again why would he drive all the way over there to do it? How did he get all of that way without his glasses and how did he managed to stab himself so many times, even in the back, and cut his own throat for good measure before crawling into the creek? It seems almost absurd to see this as a suicide, which brings us back to why the FBI want it to remain that way and refuse to budge on it. Whatever the case may be, the tragic death of Jonathan Luna has never been solved, and unless there is some groundbreaking new development it will probably remain that way.