The Makhonjwa Mountains in eastern South Africa may end up being one of the most significant locations in the history of our planet. Scientists this week announced the discovery of organic molecules found deep in the Earth inside volcanic sediment from over 3.3 billion years ago. While primordial organic matter is exciting in it’s own right, the origin of this organic matter is what makes it unique. As it turns out, this organic matter comes from outer freakin’ space. Will one of these discoveries one day confirm the panspermia hypothesis? 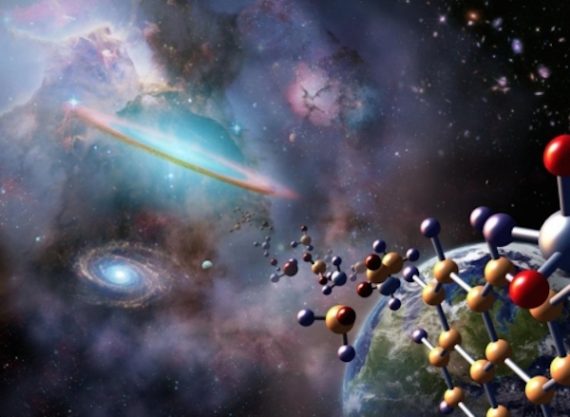 The panspermia hypothesis posits that life is spread throughout the universe on space dust, meteors, asteroids, comets, and other traveling celestial bodies. According to this hypothesis, life was introduced to Earth after one of these life-bearing objects crashed into the surface of the planet or exploded in the atmosphere like a biological piñata. There is some archaeological and scientific evidence to confirm those theories, with recent discoveries even suggesting cosmic radiation was the 'spark' that brought Earth's organic compounds to life. Now, these latest volcanic rocks dug up in South Africa seem to confirm that panspermia is indeed a possibility by proving that extraterrestrial organic matter indeed came to Earth from space at some point in our past.

“This is the very first time that we have found actual evidence for extraterrestrial carbon in terrestrial rocks," says astrobiologist Frances Westall from the CNRS Centre for Molecular Biophysics in France. “The organic matter from the carbon-rich meteorites must have been raining down at quite a high rate.”

A study of the organic matter has been published in Geochimica et Cosmochimica Acta for other scientists to review. According to the study, the extraterrestrial compounds likely fell to Earth as part of a micrometeorite swarm which exploded in the atmosphere and mixed with volatile volcanic ash. If confirmed, this discovery may prove to be some of the first evidence we have so-called “soft panspermia” or “molecular panspermia” theories which argue that rather than full-on lifeforms landing on Earth aboard comets, perhaps merely the chemical building blocks landed here and eventually began the reactions that led to abiogenesis.

Did life come to Earth from space? Could 3.3 billion year-old volcanic dust contain evidence which might answer that question? Like most scientific discoveries, it could be years before the full ramifications of this recent find are known.