Ghostly Soldiers Who Are Still On Duty

Soldiers put their lives at risk every day to protect our freedom and we are truly thankful for their sacrifices. Tragically, many of them have lost their lives in combat over the years and some of them are still protecting our freedom even in death. There are several places where the ghosts of deceased soldiers are roaming the locations as if they’re still on active duty. Below are four examples of ghostly soldiers who are still working hard long after their deaths.

The Crew Of The USS Hornet

The USS Hornet was used as an aircraft carrier during World War II and is now a museum where people can visit the ship located in Alameda, California. It is said to be so haunted that visitors can take a paranormal tour of the ship and even stay overnight if they wish.

Guests and staff have regularly reported seeing unexplained things on the ship, such as sailors walking down passageways and into rooms that are completely empty. An angry poltergeist is said to have thrown objects in the dish-washing area of the mess hall. Some people have even heard the terrified voices of people on the lower decks yelling “run”. It is believed that those are voices of the crew who did not escape combat and are still telling the others to run to safety.

The Officer Of Warren Air Force Base

F.E. Warren Air Force Base in Wyoming is said be haunted by several spirits. Troops who have been stationed at the base reported seeing the ghosts of cavalrymen wearing their full uniforms patrolling the grounds. Others have allegedly seen a soldier standing at attention near several of the buildings. A more disturbing claim is that people have heard unexplained screaming which they believe is from a Native American woman who was assaulted and then murdered by two cavalrymen.

Some people have claimed to have seen a nurse in Building 223 which was once used as the living quarters for several of the women on the base while others have said they witnessed numerous ghosts in Building 34 which was previously used as a morgue.

“Gus” is the most famous ghost on the base. He was a young officer who went home early one day to find his wife cheating on him with a fellow soldier. Since the husband was blocking the door, the other soldier jumped out of the second-story window and got caught in the clothesline which ended up strangling him to death. The soldier, who is known as “Gus”, has been said to move objects and furniture around the house, as well as open cabinets. Some say he’s still searching the house for his pants...

There have been numerous sightings of ghostly troops from the Civil War era still patrolling the Jefferson Barracks Military Post in Lemay, Missouri. The most commonly seen apparition is that of a guard with a bullet hole in his head. It is believed that he was shot during an enemy raid and he still makes his presence known to troops who are on duty.

During a Halloween party at the hospital on the base, several officers reported seeing a person wearing a Civil War officer’s uniform, but nobody at that party was wearing such a costume. In fact, several people on different occasions have claimed to have seen the spirit of a man dressed in a uniform from the time of the Civil War. 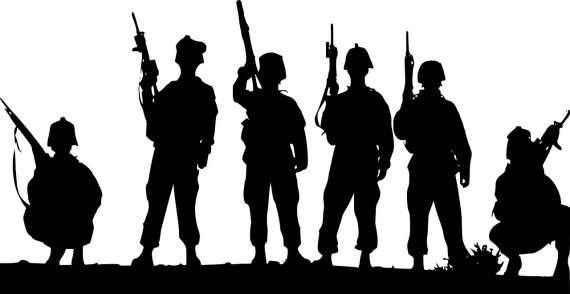 Tragically, there have been several murders and suicides at the Parris Island barracks and it seems as though some of the victims still remain there. Recruits who have been stationed at Parris Island claimed to have heard unexplained footsteps, doors opening and closing on their own, as well as the sounds of voices and people crying in the bathrooms.

A ghostly apparition wearing camouflage has been spotted, but when the soldiers approached him, he disappeared. Several members of a platoon drowned in the swampland after their drill instructor forced them to cross it. This could be why so many apparitions are constantly seen around the barracks.

Alleged Area 51 Secret Underground Base is Actually Something Cool