Ghostly Witches and a Terrifying Haunting

It was the winter of 1970 when Carolyn and Roger Perron and their five children moved into the house of their dreams in Harrisville, Rhode Island. It was a sprawling, 14-room farmhouse located on 200 acres of rural land, and seemed like a perfect quiet place for them to raise their young daughters, but it would seem as though this was not meant to be, as almost immediately upon moving in they would begin to experience some rather odd occurrences. And so began a harrowing ordeal that would involve ghostly attacks, spectral witches, and dark history, which would turn their dream into a nightmare.

It began innocuously enough, with objects going missing only to turn up in strange places, or the children hearing scratching noises or other anomalous sounds in the walls or in rooms where no one was there, as well as the sound of a broom upon the kitchen floor late at night. Carolyn would then begin to find small, neatly placed piles of dirt about the house, even after having just cleaned it, and this graduated to the scared children saying they could sometimes see shadowy figures lurking about at night, as well as what seemed to be the presence of a ghostly young boy and that of a man with a crooked smile who would watch them from the shadows as they played.

Although the parents were a bit skeptical of these wild claims at first, this was dispelled when it got even more frightening when Carolyn awoke one evening to find the form of a spectral old woman hanging over her bed, with an ancient visage, a neck bent at a strange angle as if broken, and hair that was encrusted with cobwebs, who allegedly warned her and her family to move out before vanishing. It seemed that there were several other spirits also inhabiting the home, and Roger Perron also would have his own encounters with these entities, such as a presence that would follow him around which smelt like rotting meat and which mostly prowled the area of the dirt-floor cellar. The ghostly incidents would also escalate, with furniture moving across the floor or even whole beds levitating off of the ground.

This was enough to convince the Perrons that something was very wrong with the house and that it was haunted, and it spurred Carolyn to begin researching the history of their new home and its locale. She would learn that the house itself was known locally as the the Old Arnold Estate, and had been in the possession of the Arnold family for eight generations before coming into the possession of the Perrons. What made it chilling was that she would uncover records and information from local historians that indicated that many of the family members had died here, often under mysterious circumstances or violently, including murder, suicide, drowning, and even an instance where four people froze to death outside during a harsh winter. The matriarch of the family, Mrs. John Arnold, had hanged herself in the barn, another relative had committed suicide in the attic, and in one case 11-year-old Prudence Arnold was raped, tortured, and killed by a farmhand. It was all very horrifying, and if there had been any doubt in her mind that the house was haunted those doubts quickly withered away as she flipped through the grim history outlined in those dusty archives.

The most interesting and indeed most sinister history Carolyn was able to dig up was that in the 1800s a woman named Bathsheba Thayer had lived on the property with her husband Judson Sherman, and according to her research this woman was a well known witch in the area. Much of the lore on Bathsheba has a malevolent air about it, such as that she beat her farmhands, practiced black magic, had sacrificed her own baby to the Devil by stabbing it in the base of the skull with a needle, and that she had lost three other children at very young ages under mysterious circumstances, possibly murdered by their own mother, going on to later hang herself from a tree right their behind her house, although other lore suggested that she had died from some mysterious disease. According to other lore Bathsheba’s body had turned to stone upon her death, adding to the eeriness of it all.

Carolyn became convinced that the old crone she had seen prowling about their home was none other than the insidious Bathsheba herself, and it was very obvious to them that this was a spirit filled with hate and anger. Indeed, the hauntings became more vicious over time. The children would have their hair pulled or be hit by unseen hands, a spirit would follow them around telling them that dead soldiers were buried in the walls, and “Bathsheba” would make regular frightening appearances, lashing out at them or throwing objects at them, even at one point stabbing Carolyn with a needle. This was enough for the desperate family to reach out to the famed paranormal investigators Ed and Lorraine Warren, who would soon witness much of this paranormal activity for themselves. 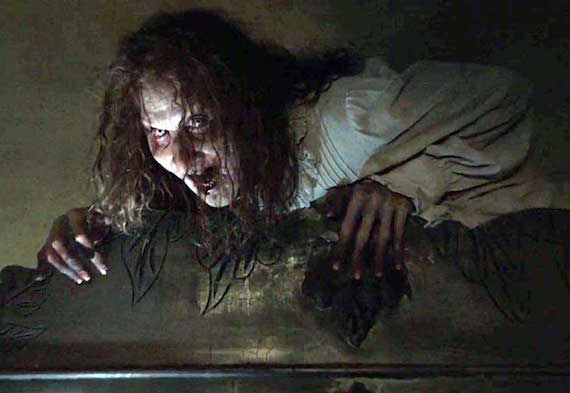 The strangest and most terrifying thing the Warrens allegedly realized was that, in addition to the house being haunted by numerous other spirits, the most sinister and intimidating one, Bathsheba, seemed to be actually trying to possess Carolyn Perron. They would claim that they performed a seance in order to contact Bathsheba, and that at the time the malicious entity had tried to jump into Carolyn to take her over, with daughter Andrea Perron in later years saying of this:

I thought I was going to pass out. My mother began to speak a language not of this world in a voice not her own. Her chair levitated and she was thrown across the room.

This was apparently witnessed by everyone present, and shortly after the seance, Roger Perron became convinced that the Warrens were only making things worse and kicked them out. Indeed, the Warren’s presence seemed to provoke the evil spirit, with the hauntings escalating and continuing on for a full 10 years before the Perrons were finally able to move away in 1980. The story has gone on to become the basis for the hit 2013 horror film The Conjuring, which is modeled after the alleged real life events and on which the late Lorraine Warren herself actually worked as an advisor. It is a spectacular tale to say the least, and one may wonder about just how much truth any of it has. 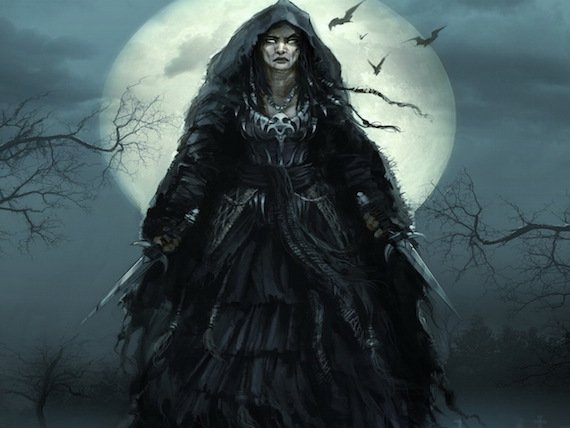 One of the criticisms aimed at this odd case is that pretty much everything we know about it comes from the 3- volume book series House of Darkness and Light, which was written by the oldest Perron daughter Andrea. In it she chronicles the whole harrowing supernatural ordeal, but this is practically the sole source for the story, and it is unclear how many embellishments might have been made or how clearly she remembers certain details. Another problem is that many of the historical “facts” about the Perron property and the “witch” don’t totally add up. For instance, while Bathsheba Sherman was indeed a real person, records indicate that she lived to a ripe old age, one of her children grew to adulthood, and there is no concrete evidence at all to show that she was ever involved with witchcraft and black magic, or that she had ever actually been put on trial for brutally murdering an infant.

Also rather controversial is the involvement of the Warrens, with the duo being accused over the years of hoaxes and trickery, although they insisted to their deaths that the story was true. But what about the hauntings? If the house was really inhabited by these restless spirits they should have been around even after the Perrons left, right? According to Andrea Perron they were, and she has said of this in an interview:

Everyone who has lived in the house that we know of has experienced this. Some have left screaming and running for their lives. The man who moved in to begin the restoration on the house when we sold it left screaming without his car, without his tools, without his clothing. He never went back to the house and consequently the people who owned it, the adjacent landowners, never moved in and it sat vacant for years.

It does seem that some of the subsequent owners of the property have had minor experiences that they cannot explain, but whether it has ever been as intense as Perron claims has not been completely demonstrated, and some owners have not mentioned anything strange happening at all. In the end we are left to wonder just what went on in this house with the Perron family, and how true any of the account is. Is this house really haunted and was this family really targeted by malevolent ghostly forces? For now the house still sits there, keeping its secrets within.

Haunted Brothel is Now a Haunted Hotel in Colorado