Godzilla, Rodan and a Strange Tale of a Flying Monster

As someone who is a big fan of Japanese monster-movies, I'm very much looking forward to seeing the new addition to the huge list of such movies. I'm talking about Godzilla: King of the Monsters, which is due to be released in just a few weeks from now. Specifically on May 31. The special-effects, of course, are guaranteed to be way better than they were decades ago. As for the format, it will be a tried and tested one: namely, Godzilla and Co. will engage in near-endless punch-ups with each other, including King Ghidorah and Rodan. And, in the process, one or more major cities will be trashed. It's all good fun! There's no need for me to describe how Godzilla looks. Everyone knows. As for King Ghidorah, he's a huge, three-headed, bat-winged monster; a towering, bad tempered creature who is best avoided at all costs. And, there's the aforementioned Rodan, who resembles a mighty, gigantic pterosaur. Interestingly, in the late 1890s, reports surfaced in the United States of sightings of immense beasts - not at all unlike Rodan - that would likely have torn heads off and made their victims into their next meals. Cool! Unless it's your head.

On April 26, 1890, the Tombstone Epitaph newspaper ran a story of extraordinary proportions, one which suggested that nothing less than a gigantic pterosaur had been found. Of course, the sensational nature of the story means that a hoax cannot be ruled out. In fact, it's likely to be the most obvious explanation. Nevertheless, it’s an entertaining saga of incredible proportions and one that is well worth relating. Here we go: “A winged monster, resembling a huge alligator with an extremely elongated tail and an immense pair of wings, was found on the desert between the Whetstone and Huachuca mountains last Sunday by two ranchers who were returning home from the Huachucas. The creature was evidently greatly exhausted by a long flight and when discovered was able to fly but a short distance at a time.

“After the first shock of wild amazement as it passed the two men, who were on horseback and armed with Winchester rifles, regained sufficient courage to pursue the monster and after an exciting chase of several miles succeeded in getting near enough to open fire with their rifles and wounding it. The creature then turned on the men but owing to its exhausted condition they were able to keep out of its way and after a few well directed shots the monster partly rolled over and remained motionless.

“The men cautiously approached, their horses snorting in terror and found that the monster was dead. They then proceeded to make an examination and found that it measured about ninety two feet in length and the greatest diameter was about fifty inches. The monster had only two feet, these being situated a short distance from where the wings were joined to the body. The head, as near as they could judge was about eight feet long, the jaws being thickly set with strong, sharp teeth. Its eyes were as large as a dinner plate and protruded halfway from the head. They had some difficulty in measuring the wings as they were partly folded under the body, but finally got one straightened out sufficiently to obtain a measurement of seventy eight feet, making the total length from tip to tip about 160 feet. 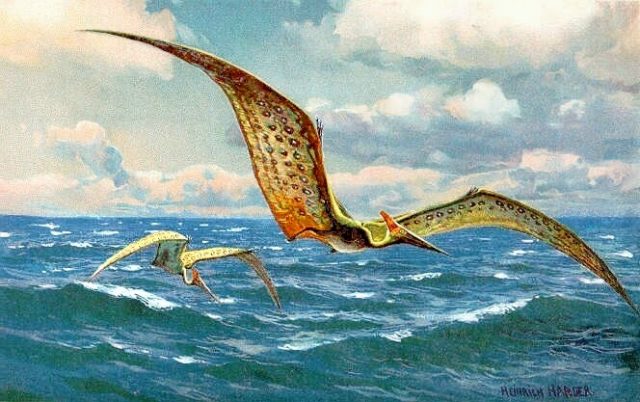 “The wings were composed of a thick and nearly transparent membrane and were devoid of feathers or hair, as was the entire body. The skin of the body was comparatively smooth and easily penetrated by a bullet. The men cut off a small portion of the tip of one wing and took it home with them. Late last night one of them arrived in this city for supplies and to make the necessary preparations to skin the creature, when the hide will be sent east for examination by the eminent scientists of the day. The finder returned early this morning accompanied by several prominent men who will endeavor to bring the strange creature back to the city before it is mutilated.”

As I said, the most likely answer to all of this is that the story was fabricated. If not, however, then the possibility that a Rodan-like monster was soaring the skies of the United States in the late 19th century becomes ever more conceivable. In view of that, maybe it won't be too long before an army of giant monsters really does decide to take on the human race. Angry skyscraper-sized monsters flattening a city near to you soon? Don't bet against it! Well, at least give it a thought while you're watching Godzilla: King of the Monsters... ;)

Hundreds of Mayan Artifacts Found Near Gate to the Underworld