Major Waddell and the Yeti: A Tale of Footprints in the Himalayan Snow

The forecast looked grim over Sikkim, as Major Waddell’s Tibetan porters were confiding to him. They had probably seen worse; poor weather wasn’t unusual along this stretch of India’s high northeastern mountains, and a bit of fresh snow could even be helpful if it allowed for the fresh spoor of any animals worth tracking.

The year was 1887, and Lawrence A. Waddell, a major with the British Indian Army, was on leave and making the most of his time off. His profession was as a medic, though he had a general interest in the sciences, having become a fellow of both the Royal Anthropological Institute and the Linnean Society.

“Snow now fell heavily,” Waddell later wrote of the experience, “and a driving hurricane of loose powdery snow was fast obliterating our footmarks, so that, as [one of our porters] pointed out, there was a great danger of our losing our way and sharing the fate which hereabout befel his former master, the late Captain Harman, in 1881.” Harman’s course had brought him along this very same route at the time of his demise; he died of frostbite while stationed in a temporary encampment awaiting his baggage coolies, who never arrived.

Waddell’s Tibetan porters were more reliable, fortunately, and the captain of this rugged mountain team could be seen through the falling snow ahead of him, poised upon a mountain yak as it bobbed along. Waddell rode a pony instead, though it was unable to keep pace with the curious-looking mountain animals his Tibetan friends were riding. 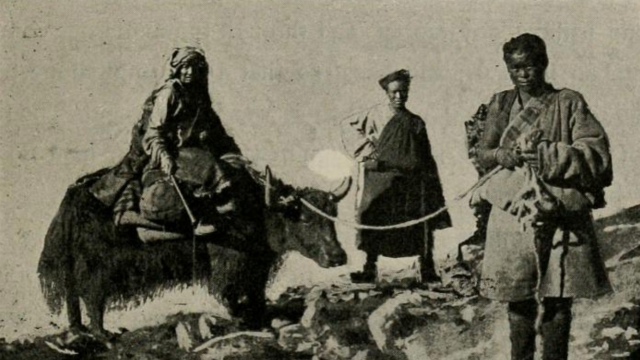 “[The captain] kindly offered me the use of his yak,” Waddell recounted. “It, however, refused to let me mount, and made several plunges at me as I approached it, although held back by the rope through its nose-ring. And I was not sorry that I had failed to mount it, for some time afterwards the tackle of ropes that fastened on the rough saddle loosened, and the captain came down from his high perch with a rush, and on the top of him came all his cooking-pots and pans, which were carried in two bags slung on behind the saddle.”

Such were the misadventures that accompanied any pass through the steep mountains of northeastern India, Waddell supposed. However, as the major would later recount in his book, Among the Himalayas, the occasion ended up providing more excitement than just Himalayan snow. At one point in their perilous trek, the party came across an unusual path in the snow that greatly excited the Tibetan crew.

“Some large footprints in the snow led across our track, and away up to the higher peaks. These were alleged to be the trail of the hairy wild men who are believed to live amongst the eternal snows, along with the mythical white lions, whose roar is reputed to be heard during storms.”

The account given by Waddell would inspire writers of later decades, most notably because it is among the earliest accounts penned by a Westerner which appeared to describe the famous Yeti or “Abominable Snowman.” The beast is famously purported to haunt the crags and crevices among the Himalayas, occasionally making treks across the frigid snowfields at higher altitudes in order to traverse the region, inevitably leaving behind the kind of spoor which Waddell and his company observed during that storm in 1887.

Decades later, Ivan Sanderson, arguably one of the most notable chroniclers of “Sasquatchery” (to borrow one of his own original terms, of which he begat many) introduced the legendary creature in his Abominable Snowmen: Legend Come to Life with an account of Waddell’s discovery, of which he noted the following:

“He remarks almost casually upon this remarkable achievement and wonders vaguely not what manner of man, but what sort of creature could have made them, and why it should have decided to cross this awful pass in the first place. The Major did not realize when he penned this thought just what he was starting; though ‘starting’ is perhaps not the exact word to describe his remarks, for what he recorded was already ancient history when Columbus sailed for the West Indies. It just so happens that, as far as popular recognition is concerned, his was one of the earliest mentions to appear in print in the English language, in what may be called modern times, of what has latterly become known as the ‘abominable snowman’.”

Indeed, Waddell’s account would become one of the early “famous” accounts of an alleged crossing of paths with the fabled Himalayan “wild man,” and likely due in part to the diligence of Sanderson and a handful of colleagues who, in the years following the Second World War, began to write for various magazines and other publications about mysterious animals unknown to science (Sanderson is, in fact, widely credited with the first use of the word “cryptozoology”, albeit in hyphenated form, in Abominable Snowmen).

However, despite Sanderson’s diligence in collecting reports of abominable snowmen (or “ABSMs” as he referred to them), Waddell had a fair bit more to say about those mysterious tracks he and his company discovered in the fresh Himalayan snow.

“The belief in these creatures is universal among Tibetans,” Waddell wrote. “None, however, of the many Tibetans I have interrogated on this subject could ever give me an authentic case.

“On the most superficial investigation it always resolved itself into something that somebody heard tell of,” Waddell complained.

That’s not all: Waddell even went so far as to offer an explanation for the mystery. He goes on to say:

“These so-called hairy wild men are evidently the great yellow snow-bear (Ursus isabellinus), which is highly carnivorous, and often kills yaks. Yet, although most of the Tibetans know this bear sufficiently to give it a wide berth, they live in such an atmosphere of superstition that they are always ready to find extraordinary and supernatural explanations of uncommon events.” 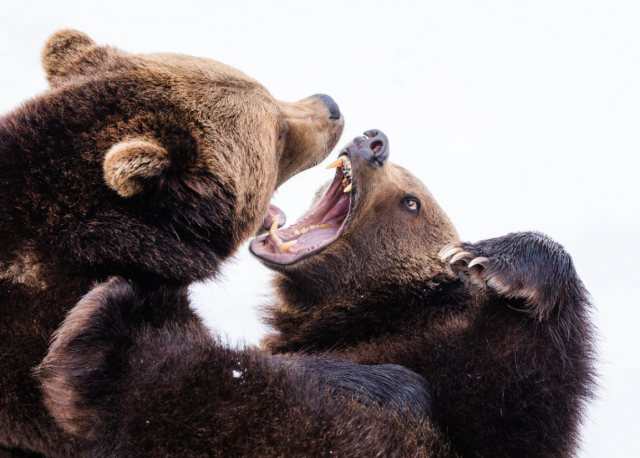 That’s one way of speculating “what sort of creature could have made them,” as Sanderson wrote of Waddell’s experience. It seems the major was of the opinion they had merely come upon the former path of an indigenous Ursus isabellinus, although one may argue that Waddell’s skepticism would be the natural response of any westerner confronted with the claim that a mysterious “wild man” existed in the remotest corners of one of the world’s steepest mountain ranges.

“Looking at these footprints,” Waddell wrote of the “yeti” prints he and his company found, “I thought of the poor snow-bears pent up in the sweltering heat of the Calcutta ‘Zoo', and what they would not give to get into such arctic regions.”

So what actually made the prints that Waddell and his company saw?

That is, and remains, a matter of speculation; although Waddell was undoubtedly familiar with bear treks from his background in biology, as well as his experience as a hunter. Later in his journey, he recounts seeing a similar set of ursine prints that converged with his company’s path, this time left in the soft mud of lower elevations, and thus less easily made the stuff of speculation or superstition.

Even if Waddell wasn’t very prone to believe in the existence of a mysterious “wild man” of the Himalayas, his account nonetheless inspired countless armchair historians in the years that would follow… and even a few retired world explorers (like Ivan Sanderson) with his storied account of unusual footprints he found in fresh snow during his trek toward Darjeeling in 1887.

The Weirdest “Wild Man” Of All?