Murder of the Moth Man: The Mysterious Voodoo Killer of 1966

In the middle 1960s, there was an obscure pamphlet on voodoo, hexes, and the magical arts that began to appear in advertisements in magazines and newspapers around the United States. Attributed to a mysterious “Charles Le Verre,” it was a modest offering, appropriately titled Tales of Voodoo and Black Magic, in which an enigmatic narrator, “Mama Tebe,” gave explanations for the magical curiosities listed throughout the book.

Needless to say, Tales of Voodoo and Black Magic never became a best seller, and few probably ever had cause for wondering about its origins, or who its mysterious author “Charles Le Verre” might have been.

The fact is, there had never been any Charles Le Verre at all; the curious little pamphlet had been written by a former blues singer named Charles Glass of Hendersonville, North Carolina, who managed a record shop in the area.

Glass, under the pseudonym “Le Verre” (merely a French translation for his actual last name) had penned his short offering on the voodoo arts as an outgrowth for his love all things foreign and unusual. Many who knew Glass from his record shop in town were aware that he sold bundles of herbs, spices, and oils to superstitious residents in town, offering them as “hexes” which were slipped to customers out the back door of his store. His home off of Wildwood Road was even more exotic than his place of business: dubbed “Hong Kong Hill” by Glass, he was known to sit outside his oriental-styled home clad in robes and a turban in the mornings and evenings. Visitors would later recall that he would chant mantras he had read in esoteric books—or perhaps created himself—as moths fluttered around the ornamental lanterns that adorned the yard.

Those who knew him say Glass had a peculiar affinity for these fluttering creatures, ascribing an almost spectral significance to them. According to Lynn Blackwell, an employee at the Tempo Music Shop where Glass sold records before his death, “Charles used to say he was going to come back in the afterlife as a moth.” She recalled one instance shortly after he died where a large moth appeared on the wall above her as she was doing inventory one night at the shop; a pleasant reminder of a vivacious character whose life ended far too early.

On July 22, 1966, Glass’s remains had been found along with two other victims—Vernon Shipman, owner of the Tempo Music Shop and also Glass’s lover, and Louise Shumate, a 61-year-old woman who lived a solitary life as a factory employee in nearby Asheville, North Carolina—all of whom had died of cranial injuries several days before. At the time of their discovery, Charles Hill and Larry Shipman, who found the bodies while carrying brush to a dump site near Summit Lake outside of town, first believed they had uncovered a set of mannequins that had been discarded by one of the shops in town.

It was a grisly scene: the bludgeoned bodies were laid out in a roughly circular fashion, Shumate’s remains partially unclothed, with clear evidence she had been sexually assaulted. Glass and Shipman’s remains, though fully clothed, were no less disturbing; a strip of iron had been placed on Shipman’s neck, around which were more than a dozen puncture marks. Glass’s upper extremities had been similarly mutilated, with a pair of crutches he had used since breaking his leg only months earlier placed over his chest in the shape of a cross. Additional belongings, which included the men’s wallets and Shumate’s purse, were also found nearby.

The headlines were sensational (which was fairly typical for that period), and at times fairly unflattering, especially for a triple homicide that quite literally implied elements of sex, drugs, and rock ’n’ roll. One statement by an investigator who had examined the case gave the following description of Glass:

“[Charles Glass] had a hand in everything from authoring a column of advice to the lovelorn to selling rock 'n' roll music to teenagers. A student of Orientalism and African witchcraft, he had friends in every strata of society. He was, in fact, deeply interested in just about everyone with whom he came into contact--with the exception of women."

Louise Shumate, on the other hand, couldn’t have been more different from Glass, though accounts of her were similarly embellished at the time (one publication described her as being “a dark and attractive woman who appeared to be 45”). Those who knew her said she was single, and lived a quiet life apart from the factory job she worked. There was, and still remains no known connections between Shumate and the record shop owners whose bodies accompanied hers in July of 1966.

Of course, the fact that Glass had been so heavily invested in “esoteric” ideas certainly contributed to the sensational air that the story carried in tabloids and true crime magazines that later covered it. Add to that the unfortunate cultural attitudes toward homosexuality in a southeastern town at that time, and it was a virtual recipe for controversy. Hence, it was not uncommon in the weeks, months, and even years after the incident to see commentaries written about the case that included such memorable titles as, “North Carolina’s Search for a Voodoo Killer.” 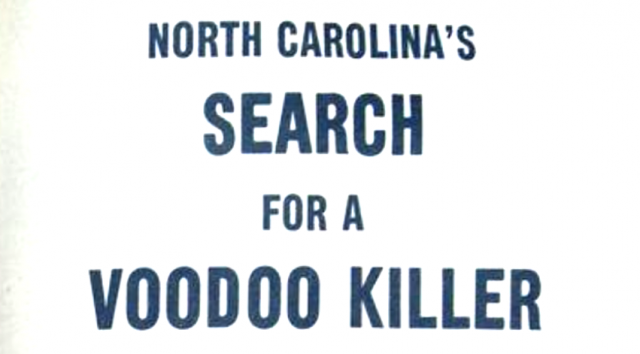 One of the most ironic aspects of the case actually hailed from Glass’s short-lived music career earlier in life; he once recorded a song called “Screamin’ and Dyin’,” which begins with a woman pleading with her jilted lover before issuing a bloodcurdling scream, followed by a loud pop reminiscent of a two-by-four smacking a plaster wall.

“The song was released nationwide and written up in Cashbox magazine,” according to writer Derek Lacey, who chronicled the incident in a detailed article written in 2016. Richard Waters, a former employee of the Hendersonville radio station WHKP where Glass recorded the song, reported that “In the early ’50s, this was as big as being written up in Billboard.” The single was released on the Magnet record label, and can be heard below:

Although there were no known connections between Shumate and Glass or Shipman, there is one odd piece of testimony that suggests the pair of record shop owners may have come into contact with her, and another unidentified individual, shortly before their deaths.

On Sunday, July 17th, several people reported having seen the victims—Glass and Shipman had been dining together in the mid-afternoon and were believed to have been consuming alcohol--and later visited an antique shop that afternoon. Meanwhile, Shumate was seen leaving her apartment in downtown Asheville at around the same time. Shipman and Glass had dinner plans later that evening with another man, Ronnie Amsden, who had been waiting for them to pick him up at the Echo Inn in Hendersonville, and thought it was strange for Shipman to have been a no-show.

What was likely to be one of the last sightings of Glass and Shipman occurred at 6 PM on Evans Cove Road, an unpaved one-lane road north of Lake Summit, where the victim’s bodies were later found. Ronnie Holliefield, Circulation Manager of the local Times-News said he observed Shipman in his 1962 Ford Fairlane with Glass in the front passenger seat. As he moved to the edge of the narrow dirt road and waived for them to pass, he noticed two other individuals in the back seat of Shipman’s vehicle: a woman “with a smirky, odd smile” and a man wearing sunglasses.

Following the discovery of the victim’s bodies, a number of odd details would begin to emerge. For instance, although Shipman and his company were seen in his vehicle close to Lake Summit on Sunday evening, his car was later found close to his residence on Maple Street. It was later reported that a group of young men had found his empty vehicle that night shortly before dark, and elected to move it back to town near Shipman’s home. Odd though this detail might have been, none of these young men were considered suspects at the time.

Of the actual suspects, there were several, although one of them clearly stood out among the rest. Edward Thompson Jr. not only lived in Hendersonville, North Carolina at the time the murders were committed, but just two years later committed multiple crimes that included the kidnapping of nine individual, five sexual assaults, and two murders. He even sent threatening letters to one area newspaper at the time, claiming that he hoped “to get a chance to blast the daylights out of the whole [newspaper] crew.” Needless to say, these were tense times, and statements were issued by local law enforcement saying that any individuals who spotted Thompson were advised to arrest and detain him at once—and use deadly force if necessary—without fear of any legal repercussions in the event that the suspect was killed.

Thompson was eventually captured and died more than two decades later in Raleigh, North Carolina, where he remained imprisoned for the remainder of his life.

There is little question as to whether Thompson had indeed been the killer; many who had interacted with him, especially after his capture, had confirmed that he confessed to the murders of Glass, Shipman, and Shumate. Nonetheless, there was a final disturbing twist in the case, which involved a telephone call to Lewis Green, a prominent newspaperman in Asheville at that time (and one, I will note, whose family members this writer had known over the years). According to Green, he received a call from Jim Burroughs, a friend of Shipman who resided nearby in Hendersonville at the time of the murders.

Burroughs, who had worked for a short time as an obituary writer local Citizen-Times newspaper, had recently been fired, and called Green to tell him, rather cryptically, that “three prominent citizens” were missing in the area. It had been evident in the hours and days after the murders that socialites Glass and Shipman were missing, but the same had not been the case with the reclusive Miss Shumate. Green later said in an interview that the fact Burroughs seemed to have had early knowledge of the crime had troubled him, although there was never any additional evidence that linked him to the killings.

Although the most likely killer had indeed been Thompson, many loose ends remained about the case for a number of years, and in fact, still linger today. Whatever the complete story of the “Voodoo” murder had actually been, with its unsettling overtones of the occult and the supernatural the death of "Moth Man" Charles Glass and the other two victims remains one of the most unusual, and unsettling multiple homicides ever to have occurred in the southeastern United States.

She’s Back! Woman Who Married and Divorced Pirate’s Ghost Has Him Exorcised