After they've exhausted all other available means—abduction, engaging military aircraft, shutting off our nuclear missiles—maybe the aliens finally figured out how to get our attention: Facebook live. Everyone and their uncle seems bent on broadcasting themselves into the uncaring void that is the internet, so it's about time the aliens jumped on board as well.

Daniel Patterson of Liberty, North Carolina was filming one such Facebook live broadcast earlier this year when a UFO briefly flew overhead. According to WMFY 2 News in Greensboro, North Carolina, Patterson didn't see the object as he was filming, but was made aware of it afterwards. Patterson says:

"I didn't know it was there it was brought to my attention by someone else that's on in the video and said, 'Hey Dan, did you see the UFO?' and I said no."

The UFO in question only appears briefly in the video. A bright light appears over Patterson's head and flies away.  It lasts only a couple of frames in the 13-minute video.  WMFY slowed the video down and took some screen shots, and it does look like it could be an object. It also looks like it could be a spot of glare. The incident is being investigated by MUFON, but they have not yet released a determination of what the object is.

For Daniel Patterson, the incident was a spiritual experience. He says:

"For me, the Holy Spirit was present in those moments."

In the video, Patterson stands on his property and says he doesn't have much to say but felt compelled by God to film a video. He talks about his love for his family and decries the tendency of people to judge others. It's a video of a man appreciating his life, giving thanks, and hoping to do good. It's pretty heartwarming. It's also fairly interesting that of all the times a UFO could show up on a Facebook live video, it does so when the person felt compelled by a higher power to start filming and talking about that sort of stuff. Of course, that added spiritual weight may have contributed to the interpretation of the object as a UFO. If it was just a guy showing off his property, would the UFO be immediately and automatically written off as a spot of glare? 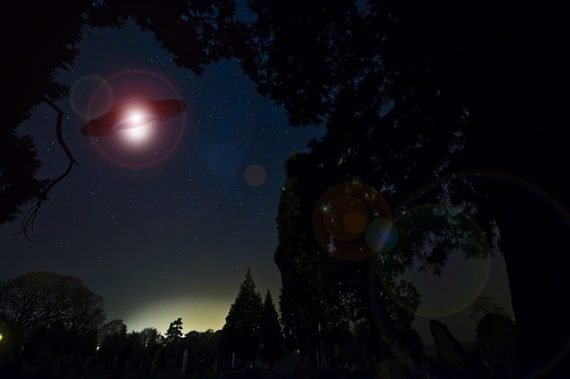 Considering that the video was filmed with the sun directly behind Patterson's head, I'm inclined to believe that the UFO is just glare from the sun. But who knows? Maybe if we all just start streaming every waking moment of our lives, we'll finally have some definitive proof. So get out there, hit record, and maybe a UFO will show up and I'll grossly misrepresent you as a person.