You'd think at this point in humanity's development, with our big ridiculous particle smashing machines, our spaceships, our plans to colonize other planets, we'd have a pretty solid understanding of something so basic as the sun. You'd be wrong. For starters, the sun is hardly basic, despite its constant presence, hanging in the sky every day since before there even were days. We often take the sun for granted and forget that it's a giant ball of condensed nuclear fire, so heavy that it warps spacetime enough to keep a series of giant balls of rock spinning around it. Far from being basic, its mind-boggling.  In fact, because of our advancements in knowledge and understanding of the cosmos, scientists have recently realized that the sun is much more mysterious and strange than they've ever imagined.

Compiling over a decade's worth of data from telescopes pointed at the sun, NASA scientists found that their predictions of the glow from gamma rays—the highest frequency band of light—were wrong. Not just a little bit wrong, but completely, utterly, and inexplicably wrong in a way that disrupts the entire understanding of the sun, and perhaps even our understanding of physics. According to particle physicist Brian Fields:

“It’s amazing that we were so spectacularly wrong about something we should understand really well: the sun.”

Scientists had previously theorized that although the sun's core would produce gamma rays, none would escape due to degradation as they try to escape the burning ball of nuclear fire. Despite that, scientists believed that the sun would still emit a gamma ray glow because of something called cosmic rays: protons that have been blasted into our solar system by supernovas or other violent cosmic events. When these cosmic rays hit the sun, scientists postulated, they would be reflected back by the suns magnetic field and burn up into gamma radiation.  Johnathan Beacom, one of the scientists who worked on the project explains it, in a way we can all understand, with cartoons:

“Remember the Road Runner cartoon? Imagine the proton runs straight toward that sphere, and at the last second it changes its direction and comes back at you.”

Except then the Road Runner burns up as a burst of radiation.

Scientists figured out that, based on the rate of cosmic rays hitting the sun and an expected one percent efficiency in bouncing them back, the sun would emit a faint glow of gamma rays. When they looked at the data they found that the gamma ray glow of the sun was seven times brighter than they had predicted. This suggests that if the cosmic ray theory is correct, the sun is bouncing cosmic rays back with 100% efficiency, which should be impossible. Even weirder, at the highest frequency of gamma rays the sun glows 20 times brighter than scientists had predicted. Weirder still, while most of the frequency bands of gamma rays are far brighter than scientists predicted, there is a conspicuous and unexplained dip in one band of frequencies that, according to astrophysicist Tim Linden, "defies all logic." He says:

"It’s much easier to get bumps than dips. If I have something that comes out of the sun, OK, that’s an extra channel. How do I make a negative channel out of that?” 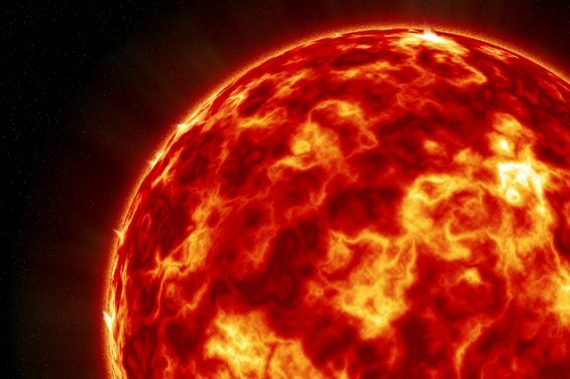 The explanations for this unexpected weirdness in the sun all fall short in some way. Scientists have hypothesized that the sun's core might be partially composed of dark matter, which, trapped and compressed by gravity could be annihilated and turned into gamma radiation, but that leaves the problem of how that gamma radiation could escape the sun. The other explanation is that something we don't understand is happening with the sun's magnetic field. According to astrophysicist John Giacalone the gamma ray signal “is probably telling us something very fundamental about the magnetic structure of the sun.”

However, no explanation accounts for the mysterious dip in the gamma ray frequency band. In fact, such a dip is so outside expectations that some experts think it's a mistake in the data. According to Tim Linden, it's no mistake:

“I think there are 15 pages in the appendix of different tests we ran to see whether we were miscalculating. Statistically, the dip appears very prominent.”

So rather than explaining and putting to rest the unsolved mysteries of the cosmos, science has once again shown us that the more layers you peel back, the more mysteries present themselves like a cosmic game of whack-a-mole. It is exciting though, and such a mystery will inevitably lead to a deeper understanding of our little slice of the the universe, and perhaps a deeper understanding of the fundamental substrate of reality as well. John Beacom sums it up nicely:

“The worst that can happen here is that we find out that the sun is stranger and more beautiful than we ever imagined. And the best that could happen is we discover some kind of new physics.”

Archaeologists Uncover an Ancient Roman Game Board at Hadrian’s Wall