In fourteen hundred and ninety-two
Columbus sailed the ocean blue
When he arrived, he heard the worst
The natives said he wasn’t the first

Those in the U.S. pushing for an end to Columbus Day celebrations and a government holiday honoring the man who didn’t discover either of the Americas may have yet another bit of evidence to support their argument. A hiker trudging around Lake Powell in Utah discovered two old Spanish coins and one of them appears to predate the arrival of Columbus by over 200 years. Utah? Spanish Mormons? Real or a hoax? 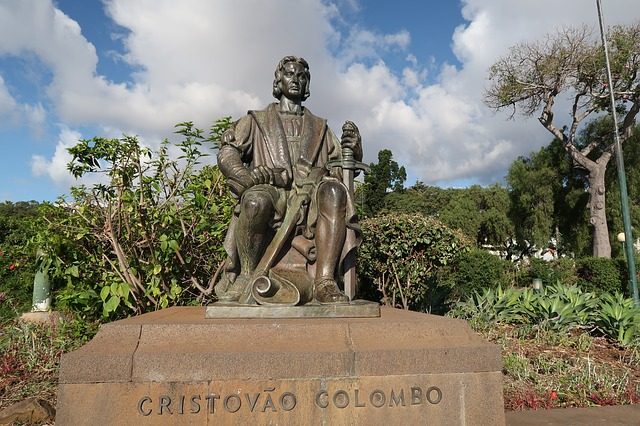 “Well, we’re just trying to not touch them and (not) get oil from hands or whatever else, dirt on them. For being in the elements, they look really well-preserved.”

Well-preserved? That may be a bad sign, but there’s much more to the story of these old Spanish coins. KSL in Salt Lake City heard rumors of the discovery, which was apparently made in September 2018 by a Colorado hiker near Halls Crossing Marina on Lake Powell about 360 miles from Salt Lake City, and found the coins were secretly being held by the National Park Service, since Lake Powell is part of the Glen Canyon National Recreation Area. When confronted, park service archaeologist Brian Harmon confirmed the finding and took reporters to the museum on the Arizona side of the park, where technician Lisa Riedel donned white gloves and brought them out for inspection. (See photos of the coins here.)

"They're very thin. We're guessing one is probably silver and one is maybe copper."

Guessing? Yes, the park is keeping things under wraps for now because the implications of a coin in Utah predating Columbus are so shocking. The unnamed hiker wasn’t using a metal detector (they’re illegal in the park) – he saw the coins on the ground (after 800 years?) and thought they were trash. After taking them home and doing some searching, he determined the dime-sized coin matched Spanish coins from 1290 while the quarter-sized one looked to be from the 1660s, so he decided to give them back to the park. (Must not be worth anything on eBay?)

"So what we're doing is reaching out to experts in old Spanish coins to learn, are these authentic? How old are they?"

When the first known Spanish visit to Utah happened in 1776 and was nowhere near Halls Crossing, archeologist Harmon has a right to be skeptical. That doesn’t mean it’s not possible that some other Spaniards visited the area before 1776 or even long before Columbus (although that doesn’t explain the 400-year age difference between the coins) or that pre-Columbus explorers traded the coins with natives who eventually brought them to Utah.

Or, even if the coins are real, they could have been planted or left there recently by accident or as part of a hoax. Whatever the case, it’s an interesting discovery and Harmon refused to divulge the exact location where they were found so that treasure hunters don’t interfere with the park service search for other old Spanish coins.