It was a typical night in rural Northern Quebec, a place where “typical” generally means one thing: cold.

This part of Canada is populated by many small communities, the likes of which line the eastern coast of James Bay, where the Maquatua River empties by the small village of Wemindji. A tightly-knit Cree community of just about 1400 people, familiarity is the norm here, and for locals to see an unfamiliar face might be the most unusual thing to ever to happen.

Oddities around the James Bay are uncommon, yes… but that isn’t to say such things don’t ever happen.

For Melvin Georgekish, this particular night was like any other, as he drove in his pickup truck along a familiar stretch of road on the outskirts of the village.

“I was going up the road,” Melvin recalled of the experience. “There's a gravel pit [six kilometers] from Wemindji.”

It was near that gravel pit that he first noticed anything out of the ordinary; something reflecting red light from the tree line nearby.

“I was driving, and I was doing around 85 or 90 kilometers an hour,” Melvin later said. “I see two sets of eyes, one short and one to my left and I see the tall one go down and went back up and I guess they took off.”

The eyes of the two animals he saw, that is, seemed to reflect red light. There appeared to be two of the creatures, and they were large, whatever they were. Melvin wheeled his pickup around and went back to the area where the animals had been, but by the time he returned to where he had initially seen them, they were already gone.

Perplexed, Melvin returned home. However, that night he couldn’t stop thinking about the unusual animals he had seen earlier that evening.

“I was in my bed, and I was thinking and thinking, [and] there’s no animal that has red eyes over here. And that was the first time I’ve seen red eyes like that.”

The following day, Melvin decided to return to the area where he had seen the red-eyed creatures and found what appeared to be footprints in the soft moss by the roadside where the animals had stood. 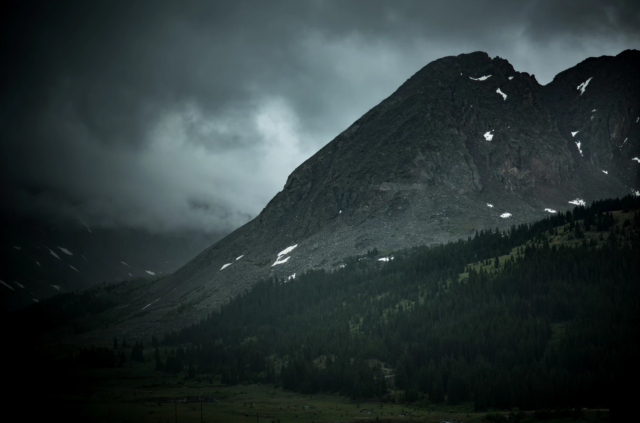 "You can see the toes,” he later said in an interview with the Canadian Broadcasting Corporation. “It’s like a human foot, but way bigger than a human foot. Wider, too.”

The presence of footprints is another matter entirely. What is significant about this report—and similar to dozens of other reports of alleged sightings of hairy, upright-walking hominids in North America—is the apparent presence of eyeshine, the familiar red-orange glow cast by the eyes of nocturnal animals such as raccoons, possums, and many other species which move about at night. This glow-like effect is caused by a reflective layer called tapetum lucidum that is present in the eye of various nocturnal animals.

If reports of “red-eyed monsters” that are so popular in cryptozoology are any indication, the mysterious ape-like creatures said to inhabit remote forested areas of North America would appear to have it too. References to such “red-eyed monsters” are rife throughout speculative literature. John Keel mentioned them in his 1975 The Mothman Prophecies, describing the perennial nature of such encounters as follows:

“When the ancients sighted giant, shambling bipeds covered with hair, their eyes blazing like fierce coals, they assumed they were confronting demons. Early investigators eventually concluded that such demons did not really exist, even though they often left footprints behind and caused physical damage. They coined the word khimaira (chimera) to describe them… Several times each year tall, hairy creatures with red eyes are still seen throughout the United States and, in fact, throughout the world. Like many forms of chimeras, they are usually accompanied by the smell of rotten eggs—hydrogen sulfide.” 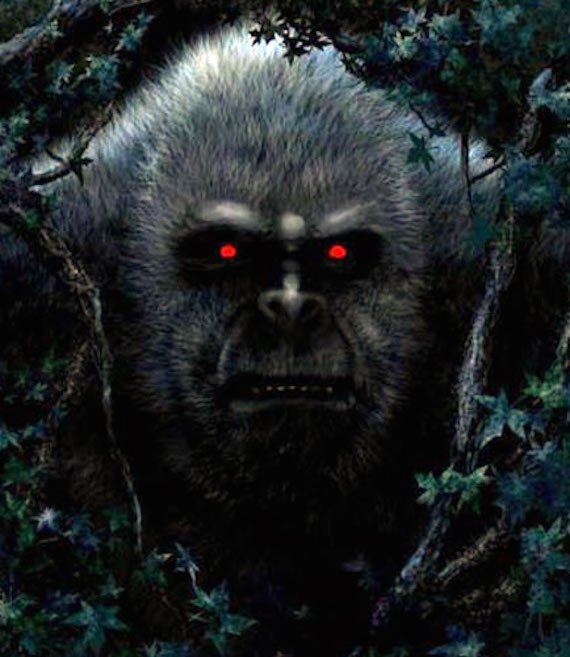 While the appearance of “glowing red eyes” has remained a common feature in reports of hairy bipeds over the years, the issue is often left unaddressed in a large majority of literature on the subject; particularly those which approach the Sasquatch problem from a scientific viewpoint (these include Jeffery Meldrum, Ph.D.’s Sasquatch: Legend Meets Science, the late Dr. John Bindernagel’s The Discovery of the Sasquatch, and primatologist John Napier’s Bigfoot: The Yeti and Sasquatch in Myth and Reality, to name a few).

It is possible that the consistent description of glowing or highly reflective eyes has simply been overlooked by more serious-minded researchers, or it may equally be the case that from an anatomical perspective, it seems so highly unlikely that it is dismissed from further argument. Point in case, there are no primates known to possess tapetum, with the exception of certain species of lemur, since the majority of primates that exist today are diurnal (that is, they operate during daylight hours). Hence, why would any mystery species of hominid—if such a thing exists—be any different, anatomically speaking?

One logical answer, of course, would be if they were nocturnal.

There is a surprisingly rich history of nocturnal behavior attributed to monsters and mystery hominids, both real and imaginary, throughout time. Even delving into myth and folklore, Beowulf’s nemesis, the mighty Grendel, was referred to in the original Anglo-Saxon translations of the epic as being sceadugenga, a word essentially meaning “night goer.”

Stepping out of the realm of mythology, we have Carl Linnaeus, the “Father of Taxonomy” whose essential system devised for naming and classification of organisms is still very much with us today, albeit with a few updates and modifications. As far back as the 1750s, it seems Linnaeus also had an idea that there might be nocturnal, man-like hominids in existence that were unrecognized by science.

Russian cryptozoologist Dimitri Bayanov, who is widely credited with the invention of the term “hominology” gives the following account of his own discovery of Linnaeus’s conviction that mysterious hominids existed, seemingly apart from humankind, and of the nocturnal variety:

It was with awe that one day, in 1966, I opened and copied relevant pages in Latin from the original 10th edition of Caroli Linnaei Systema Naturae (1758), in the library of the Moscow Zoological Museum. This edition launched the Linnaean nomenclature. One of its salient features is that it presents two living species of man: Homo sapiens (man the wise) and Homo troglodytes (caveman). The first is described as “diurnus, varians cultura, loco,” the second as “nocturnus” and “sylvestris.”

The Latin phrases at the end of that passage, of course, denote a “nocturnal” and “wild” variety of human-like creature. Historical accounts like this do seem to offer the consistent trope of a nocturnal creature in both mythology, and also in early scientific literature. However, intriguing though they are, they offer little in the way of substantive information on the apparent presence of eyeshine in mystery hominid reports.

In the second part of this article series, we will explore whether a reflective “glow” like this might be able to occur even in the absence of a tapetum, along with claims of human beings who appear to exhibit eye shine, and how all this might relate to purported creatures like Sasquatch and other mysterious, "red-eyed" bipeds reported in various parts of the world.