In 2012, a number of articles began to appear online about a young Chinese boy, Nong Yousui, whose eyes—colored an unusually vivid shade of light blue—reportedly possessed remarkable night vision.

According to his parents, his eyes “glowed in the dark,” reflecting light much like a cat’s eyes do at night. However, a television news report which tested the reflective qualities his parents had claimed failed to capture the phenomenon on camera.

Live Science reported on Yousui’s condition in 2012, quoting a pediatric ophthalmologist, James Reynolds, saying that "A video could capture [eyeshine] easily, just like in nature films of leopards at night."

“Evolutionarily,” Reynolds said, “mutations can result in differences that allow for new environmental niche exploitation. But such mutations are modified over long periods. A functional tapetum in a human would be just as absurd as a human born with wings. It can't happen.”

However, an update to the article did note additional correspondence with Adam Hickenbotham, an optometrist and clinical researcher at the University of California, Berkeley, who proposed that Yousui may have been born with what is called ocular albinism, a condition that causes individuals to possess lightly-pigmented irises that could appear slightly reflective.

In part one of this article series, we began with a look at descriptions of glowing “red eyes” in alleged reports of Sasquatch and similar creatures, a common theme in various literature on the subject which appears to suggest eye shine similar to that possessed by many nocturnal animals. This eyeshine is caused by the highly reflective membrane located within the eye of these nocturnal mammals, called the tapetum lucidum (or more commonly simply “tapetum”).

However, as my earlier article addresses, there are no primates today, with the exception of a few varieties of lemurs, that possess tapetum, since primates (and humans) are day-dwelling or diurnal creatures. Because of this, when the issue of eyeshine does come up in relation to alleged mystery hominid reports, questions range from whether an undiscovered nocturnal primate actually could possess tapetum, to whether there might be other biological factors, as suggested in the case of young Nong Yousui, that could still account for reflective qualities in an organism's eyes, even without the presence of the tapetum.

This raises some rather novel questions, particularly in relation to reports of mystery hominids like the Sasquatch (see image below, alleged to be of a "Skunk Ape" photographed in Florida in 2001, which displays what appears to be eyeshine in the reflected light of the camera's flash).

Cliff Barackman, best known for his tenure on Animal Planet’s Finding Bigfoot, discusses the eye shine issue at his website, touching on the potential existence of a tapetum in the Sasquatch eye, but also offering an interpretation of the eye shine problem which looks at other possible causes. He writes:

“Perhaps the sasquatch eye is so efficient at gathering the available ambient light (even in very low-light conditions), that it can focus what little light there is on the retina and have some reflect back at the witness. In dark conditions, it wouldn’t take much reflected light to stand out against the black background, and would indeed appear to glow. (The reports of other eyeshine colors in sasquatches suggests the presence the reflective layer behind the retina called the tapetum lucidum, which is commonly found in nocturnal animals. However, the inconsistency of reports leaves this presence far from certain.)”

As Barackman suggests, the structure of the Sasquatch eye might present an almost peculiar efficiency for gathering available ambient light, which could explain the occasional appearance of an eyeshine effect, with or without the presence of tapetum. However, for this argument to hold any weight, similar things would need to have been observed in other varieties of extant primates which, as we already know, do not possess the tapetum.

Interestingly, although references to it are obscure, reflective qualities of this sort actually are said to have been observed, and of all places, in humans. In 1940, a pair of letters appeared consecutively in the journal Nature, issues 145 and 146, which described a number of instances where human eye shine had been observed. The first account reads as follows:

“From time to time, reports have appeared of the occurrence in human eyes of the phenomenon of "night-shining," which as was indicated in a recent paragraph (Nature , March 30, p. 506) has been observed in many animals by Ernest P. Walker, assistant director of the National Park of the Smithsonian Institution. It was there stated that Mr. Walker had no definite proof of such cases, although he had encountered reports of them. That statement has led Denis G. Dyson, King Edward VI School, Stratford-on-Avon, to write saying that for many years he has known of an "undoubted case" of shining eyes in a shop assistant in Birmingham. Although, not being aware of the rarity of such an occurrence he made no particular observations, his impression is that the glow was of a "dark red colour". In view of the apparent lack of information about such a condition in human beings, it would be of interest if some scientific worker could follow up Mr. Dyson's clue.”

Note that in this anecdotal report of human eyeshine, the color is described as having been a “dark red” similar to the existing literature pertaining to Sasquatch reports. The second report, published in Nature 146 by E.A. Glennie, is as follows:

“Speleologists have perhaps rather exceptional opportunities for observing 'night-shining' in human eyes. I have seen it on three occasions with different individuals, and once was accused of exhibiting' the phenomenon myself.

“On all occasions the observer was below the object and the illuminant was the concentrated beam of a focused electric torch. The glow from the eyes is a most uncanny tawny orange, causing exclamations of horror. Once only have I seen night-shining by a human outside a cave. An Indian woman, who was bending low down, looked back from at position at the headlights of my car--a momentary gleam from her eyes, which ceased as she stood up and faced the light. Hence the incidence of the light on the eyes on this occasion was similar to that on the previous occasions in caves. Is it possible that the normal individual only exhibits the phenomenon when with dilated pupils, he is caught by a concentrated beam of light coming from this rather unusual direction?”

The concluding remarks in Glennie’s letter are interesting, in that this could present another plausible way that an effect similar to eyeshine might occur in some humans (similar to ocular albinism), but obviously without the presence of a tapetum. As we have already heard, possessing a tapetum is an evolutionary trait that humans simply could not possess without a series of mutations, and a long period of time required for such adaptations to nocturnal living to occur.

There is one final consideration that must be given in relation to this discussion. In the first part of this series, I introduced the discussion of eye shine with an account given by a hunter named Melvin Georgekish, a member of the Cree community of Wemindji in Northern Quebec. He had been driving his pickup along the James Bay in August 2013, when he observed two large creatures whose eyes appeared to reflect red light in the headlights of his truck.

“That was the first time I’ve seen red eyes like that,” Georgekish, who had spent much of his adult life outdoors, recalled of the incident.

However, there are other animal species in the region which possess eye shine like this; in Georgekish’s case, the most likely culprit might have been a bear, a large creature that not only can display a dark orange or red eyeshine but can also stand upright; all of these traits would be consistent with other movements and behavior of the animals in the account he gives.

Returning to Georgekish’s description, he recalled seeing “two sets of eyes, one short and one to my left and I see the tall one go down and went back up and I guess they took off.” Indeed, given this description, the presence of bears might be as good a guess as to what Georgekish saw as anything. 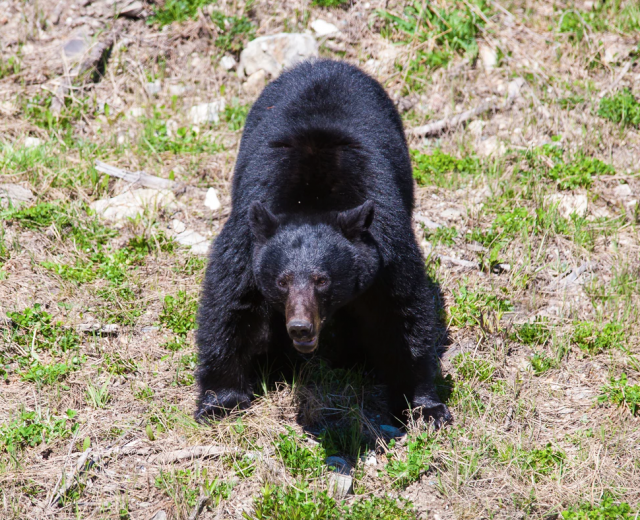 “Many of the cases could represent bears, I think, considering that bear eyeshine is consistent with the reports.” Joe Nickel wrote in an article he did on eyeshine in Bigfoot reports. “That of the brown bear can show in photos as yellow to yellow-orange, while some witnesses describe red or green; black bear eyeshine can also appear yellow to orange, although red is sometimes reported.”

Altogether, the eye shine component regarding reports of mystery hominids is an interesting one. Highly reflective or “glowing” eyes are a prevalent feature in eyewitness accounts, and yet this seems to conflict with the known physiology of most living primates today, making the idea a hard-sell for those looking to make the scientific case for Sasquatch. Then again, if a creature like Sasquatch does exist, descriptions of its behavioral patterns often do entail nocturnal behavior... perhaps the unlikely possibility of tapetum lucidum as an explanation for the "glowing red eyes" shouldn't be ruled out entirely.

As with all of the intriguing questions that remain about this subject, the bottom line is that we simply will never know unless a specimen can be obtained, or at very least until reliable field observations can be made which leave no room for further doubt that these animals are, in fact, really out there.