“Terror in the Skies” — A New Film From Small Town Monsters

Imagine sitting on the edge of your seat engrossed in a scary horror movie when suddenly ... a paranormal conference breaks out. That’s the feeling I got while watching “Terror in the Skies,” the latest documentary from Small Town Monsters. Fortunately, in the capable and experienced hands of director/writer/producer Seth Breedlove, this combination is a good thing, with seamless transitions between movie and expert commentaries that maintain the tension while adding meat to already meaty stories about a number of mysterious flying creature events in the history of Illinois that continue to occur right up to the present. 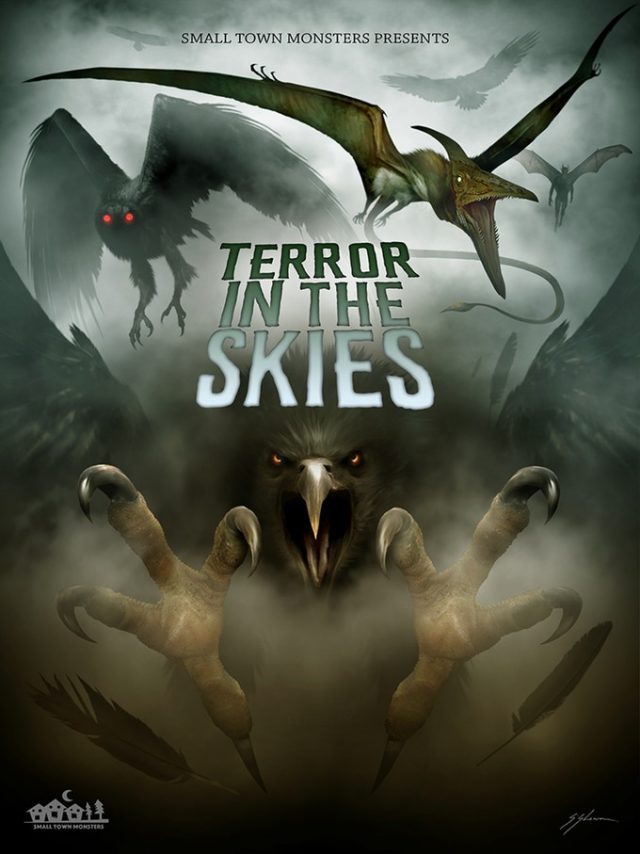 “Terror in the Skies” opens with an eerie twilight recreation of a 1948 small town sighting of what appeared to be an abnormally huge bird … a sighting we quickly learn was just one of many at the time in southern Illinois’ heavily wooded corner of the Ozark Mountains as they fade into the Mississippi River. The sightings are recounted by Illinois native Loren Coleman, founder of the International Cryptozoological Museum and one of the world’s leading authorities on mysterious and mythical beasts.

Wearing his producer hat well, Seth Breedlove recruits an impressive array of senior and up-and-coming cryptid investigators and writers to fill in the details of a surprisingly large yet little known number of flying creature sightings in Illinois dating back to Native American legends and centered around the Mississippi River town of Alton. From giant birds to dinosaur-like creatures to flying humanoids, director Breedlove weaves the narration of longtime collaborator Lyle Blackburn through animated recreations, newspaper clippings and eyewitness accounts of sightings of the Piasa Bird, Thunderbirds and lesser-known aerial apparitions.

“Terror in the Skies” closes in the skies over Chicago, where sightings of various forms of bird-, bat- and Mothman-like creatures have been reportedly steadily since 2017. Bringing together the analyses of a number of cryptozoologists and paranormal investigators who have looked into these sightings, Breedlove creates a form of that paranormal conference staple – the round-table discussion – to form a pseudo-debate of what it might be and whether this apparition deserves its “Mothman” description.

Conclusions? You’ll have to see “Terror in the Skies” to find out. Rest assured it exceeds the high bar Seth Breedlove sets for himself and the rest of his excellent Small Town Monsters team. The long list of Kickstarter contributors in the credits attests to the high quality of their previous documentaries and series and the newest offering will please these folks and the ever-growing number of fans of this soon-to-be-big-town production company. The release date is June 7, 2019, but you can pre-order “Terror in the Skies” by clicking here.

From Whistleblowers to Demons in the Department of Defense