The Dark History of the Blood Countess Elizabeth Báthory

It often seems that deep down within us, past the face we show to the world, there is often something darker coiled up in the shadows. Humans sometimes seem to have as much of a propensity for evil as they do for good, and history is littered with tales of deranged serial killers who have managed to stamp a stain on the chapters of their eras. Yet most of them cannot compete with one of the most brutal murderers the world has ever known. Here is the tale of a countess who single-handedly wiped out perhaps hundreds of people, and who is shrouded in enigmatic legends of black magic, vampirism, and pure, unadulterated evil.

As with many of the worst killers in human history, the one who would go on to become known as “The Blood Countess” and “Countess Dracula” was not born into this world a monster, but rather as an innocent, wide-eyed infant, with the whole future sprawled out ahead of her. Indeed, in 1560 she was born into more fortunate circumstances than most, the daughter of the eminent Baron George VI Báthory and Baroness Anna Báthory, rulers of the Hungarian independent principality of Transylvania, and so Elizabeth Báthory was brought up amidst nobility and opulence. She had the best education, powerful relatives in high places, and a privileged existence of having everything she could ever want in life, but despite this from an early age there began to appear signs that there were dark clouds on the horizon for little Elizabeth.

One of the first signs that there was something wrong with her were her recurring seizures, probably epilepsy but at the time were thought to be what was called “Falling Sickness,” the treatment of which included rubbing healthy blood on the lips and drinking a concoction of brains and blood. This would have no doubt been rather traumatic for one so young, but there was also the fact that she was often subjected to the sight of horrible tortures carried out by her powerful family against criminals, such as allegedly seeing a man sewn up into the carcass of a horse and many others, and she is also said to have been witness to black magic rituals carried out by her aunt, Klara Bathory, a known witch and suspected murderer. It was perhaps because of her poor health, bad role models, and these gruesome scenes etched into her young mind that Elizabeth began to increasingly exhibit wild mood swings, short-temperedness, and a proclivity towards violent outbursts, and this would all only escalate when she was married at the tender age of 14.

Elizabeth’s husband was another Hungarian noble by the name of Ferenc Nádasdy, the whole thing had been arranged by their families for political clout, and she moved into Nádasdy Castle in Sárvár before receiving the massive Čachtice Castle, in the Carpathian Mountains of what is now Slovakia, as a wedding gift to her from her new husband. She would end up spending much of her time alone in this remote, cold castle tending to the estate while her husband was away fighting a war against the Ottomans as a chief Hungarian commander. Even before this there were gruesome tales surrounding them, such as the rumor that Elizabeth had given birth to the child of a servant boy, the infant later viciously killed by Nádasdy. Indeed, Nádasdy was rumored to be quite the sadistic one, said to torment servants and to employ much torture against his foes in his military campaigns, and he fed into Elizabeth's already festering capacity for dire deeds.

It is unclear if this exacerbated Elizabeth’s already present mental instability, but it was during her marriage to Nádasdy that she would cross over into the realm of pure evil. There was allegedly a special room within the cold confines of the castle, built by Nádasdy expressly for the purpose of torturing his servants and anyone who crossed him, and Elizabeth began to put this torture chamber to use as well, experimenting on servant girls with different methods of causing pain, often joined by her husband, who taught her and mentored her in the ways of torture. This was already grim enough, but it would all escalate considerably when Nádasdy died in 1604 after contracting a mysterious illness that left him debilitated and unable to walk. This would turn out to be unfortunate for the servants, because although he had been a tyrant he was till a saint compared to his wife, who had a ruthless coiled, roiling evil force thrumming within her. 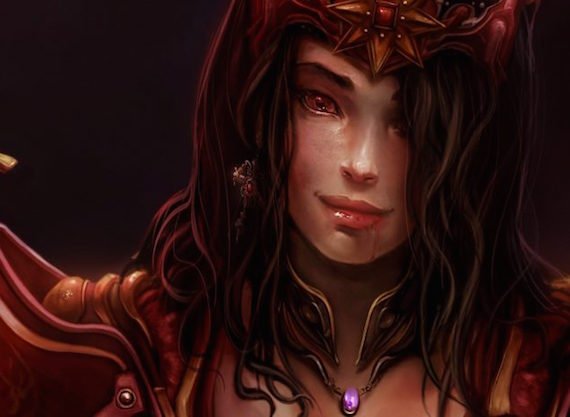 Upon her husband’s death, Elizabeth Báthory’s sadistic streak supposedly went unchecked and spiraled to new levels of depravity, erupting into an orgy of violence and death, her lack of anyone to hold her back or keep her inner monster in check allowing this maniacal woman up in her spooky castle to unleash on those around her with all of her pent up demented will. One of her favorite things to do was to force servants to go out into the snow naked in the dead of winter, after which she would douse them with cold water and watch them freeze where they stood, like statues of ice. She would also put servants in spiked cages hung from the ceiling, torture them with needles, slather them with honey and unleash bees or other biting, stinging insects upon them, poke them with red hot irons, or cut off digits, and this graduated into ever more perverse atrocities. She was said to cut servants and suck their blood, bite off and eat chunks of their flesh, and to even empty their blood into vat in order for her to bathe in it, convinced that these literal blood baths were the key to eternal beauty and youth. On top of all this, it would later be said that she also was a powerful sorceress and witch, with the ability to cast nefarious dark curses.

It is unknown to just what extend any of this actually happened the way it is described in the lore, but at the time rumors began to fly of the crazy countess up in her evil lair, torturing and killing with impunity within her dank castle walls. Some servant girls who survived their terrible ordeals would stumble into villages nearby telling of these horror stories, and it was not long before this all caught the attention of authorities, although her high social standing and title made her pretty much untouchable and above the law. Nevertheless, in 1610, after a decade of her dark deeds, she was finally arrested after the daughters of upstanding citizens went missing in her care, with the authorities, led by a Count Gyorgy Thurzo, allegedly finding imprisoned girls and even dead bodies strewn about at the castle when they investigated. Elizabeth Báthory was imprisoned within the walls of Čachtice Castle, along with some accomplices she was mentoring in the ways of torture and death, and she was apparently held within a windowless room with only a slit through which to pass food, languishing their in the gloom.

Elizabeth Báthory’s subsequent trial would see over 300 witnesses and survivors testify against her, weaving a story of suffering and death that made the court shudder, and it became a major scandal that would become intertwined with folklore and whispered amongst the populace. She would become the Blood Countess, an unstoppable force of strife with magical powers, and her legend grew even as she was being tried. According to eyewitness accounts, Elizabeth was responsible for the torture, maiming, and deaths of anywhere between 50 to 650 young girls between the ages of 10 and 14, often lured away from their homes by the promise of high pay or just straight kidnapped, with the official count settling at “only” 80. However, due to her royal standing, despite all of this it was only her accomplices that faced prosecution, which meant execution, and in the end she would die under house arrest in her castle in 1614, alone and probably dreaming dreams of more carnage and death, dreams of blood. Curiously, her body would sort of disappear after this, and no one is really sure where one of the worst serial killers in human history is buried.

The story of the Blood Countess Elizabeth Báthory has gone onto become the stuff of legend, and is often suspected as being one of the influences for Bram Stoker’s Dracula, such is her dark and twisted infamy. Many of the elements of her life and crimes have no doubt been exaggerated and warped over time to make her out to be some kind of vampire boogieman, and we are left to wonder about how true the bizarre tales are and what caused her to go down that macabre route. She might have been just a very psychotic individual drunk on power and free to satisfy her darkest desires, or she might have even been set up by the church or the victim of some conspiracy, as has been suggested in recent years. Whether she really bathed in blood or practiced black magic is also disputed, but what we do know is that she did exist, and did torture and kill between 50 and 650 people, making her a true monster despite what the reality of the circumstances might be. For now the ruins of that castle still stand as surely as her repulsive legacy, and Elizabeth Báthory is widely regarded as one of the most prolific serial killers in history.