The Grim Mystery of the Hand of Glory

Throughout history and across cultures there have been various arcane artifacts, charms, and talismans that have been conjured up from the cold places beyond our understanding to do our bidding. Endowed with vast powers, these items have spawned myths and legends over the centuries and have served to baffle and confound, to keep us wondering if they were ever real in any sense at all. Once such mystical magical artifact is one which has a definite sense of the wicked about it, and which was long feared as an occult object of dark power.

What is commonly known as a “Hand of Glory” is a macabre magical item that originates in the occult traditions and folktales of Europe stretching back to at least the 1600s, and which seems rather simple on first inspection, if not a little grotesque. While traditions and versions vary, essentially, the object is the actual disembodied hand of a hanged criminal, most often the left hand but also the right if the criminal was a murderer, which is then put through a process of being drained of blood, dried, and pickled, after which a candle made from the rendered fat of a different felon is set within it, preferably someone who was also hanged. One commonly cited recipe for creating a Hand of Glory comes from an occult grimoire from 1722 called the Petit Albert, which specifies:

Take the right or left hand of a felon who is hanging from a gibbet beside a highway; wrap it in part of a funeral pall and so wrapped squeeze it well. Then put it into an earthenware vessel with zimat, nitre, salt and long peppers, the whole well powdered. Leave it in this vessel for a fortnight, then take it out and expose it to full sunlight during the dog-days until it becomes quite dry. If the sun is not strong enough put it in an oven with fern and vervain. Next make a kind of candle from the fat of a gibbeted felon, virgin wax, sesame, and ponie, and use the Hand of Glory as a candlestick to hold this candle when lighted, and then those in every place into which you go with this baneful instrument shall remain motionless. 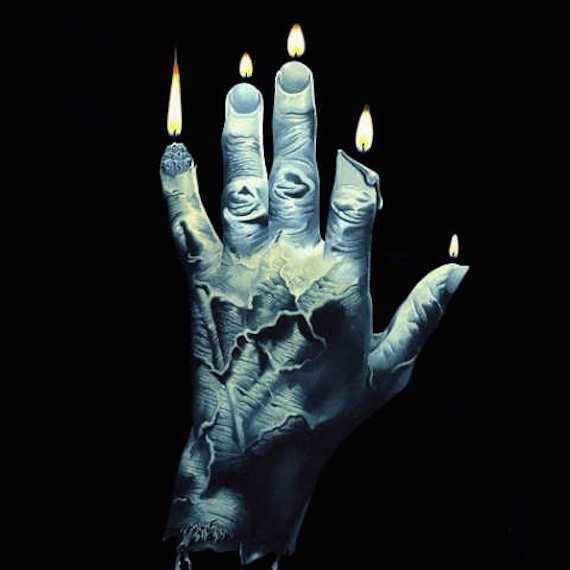 It is all very mysterious, as there is no common agreement on what the ingredients zimat or ponie even are, making it hard to craft one today. Other methods of preparation exist as well, such as one from a plaque at the Whitby Musuem in England, in which it is written:

(The hand) must be cut from the body of a criminal on the gibbet; pickled in salt, and the urine of man, woman, dog, horse and mare; smoked with herbs and hay for a month; hung on an oak tree for three nights running, then laid at a crossroads, then hung on a church door for one night while the maker keeps watch in the porch- and if it be that no fear hath driven you forth from the porch ... then the hand be true won, and it be yours.

These are common examples, but there are many variations. In some stories the candle’s wick is made of the criminal’s hair or there are several candles set between the fingers or with even the fingers themselves acting as candles, in others the hand has no candles at all, in yet others the hand is from a child or a virgin, in others still the whole act must be done under a lunar eclipse, but in all versions you are left with a dried and pickled hand, so you may be asking right about now what it would be used for. Hands of Glory are most commonly mentioned in the lore as being of great use to thieves, as if the proper incantation is recited they supposedly have the power to open any locked door, confer invisibility upon its user, cast light that can only be seen by the one holding it, and even paralyze those in its vicinity or put everyone in a house to sleep, making it all the easier to rob them.

It is thought that the concept of the Hand of Glory may have come from the myth of a plant called the mandrake, which was said to have roots and leaves that look very much like a human hand and which according to the lore grows under the gallows, drinking up the blood of the hanged. The stories also likely were propelled by the belief that human remains held certain occult powers and properties. Regardless of its origins, there are numerous accounts of Hands of Glory being used throughout the centuries. 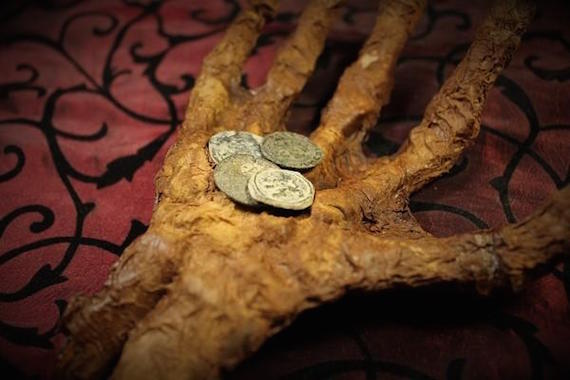 One popular account that is representative of such tales was written of in the 1873 book Curious Myths of the Middle Ages, and tells the story of a cloaked beggar who comes in out of a raging storm at an inn in Northumberland. There are no rooms or beds available, but the mysterious stranger is allowed to sleep at the fire next to a servant girl. At some point during the night, the servant girl awakes to spy the beggar withdrawing a withered human hand from beneath his cloak, after which he lights some candles between its gnarled fingers, mutters an incantation, and starts throwing valuables from the inn into a sack. The girl tries to wake others in the house to warn them of what is happening, but finds them all in a deep sleep from which they cannot be roused. Taking matters into her own hands she approaches the thief and tries to put out the flames, but finds that they will not go out by any means until she finally douses them with milk, upon which the flames go out, the others wake up, and the thief is apprehended.

Indeed, it was thought that the only way a Hand of Glory could be put out and the spell undone was to use milk or blood, and it was said that nothing else could extinguish it. The powers of the hand could also be negated through slathering a concoction made from the gall of a black cat, the fat of a white hen and the blood of a screech owl over any possible entry point such as doorways or windows. If this were done, the hand would lose all of its mystical abilities upon crossing this threshold, rendering it useless and just a normal mummified hand.

While this may seem to all be purely urban legend and folklore, there are actually some supposed real Hands of Glory held in museums, each with its own story behind it. One of these hands can be found on display in the Walsall Museum in England, and it is said to have been found lodged within a wall at The White Hart, in Caldmore Green during renovations. Another such hand is on exhibit at the Whitby Museum, also in England, and this hand was supposedly found within the wall of a cottage in the village of Castleton, in North Yorkshire by a local stone mason named Joseph Ford, who donated it to the museum in 1935.

Is there anything to this all, or is this just an ominous and demented urban legend? It seems rather strange that this particular magical item is so obscure and confined to the pages of long forgotten texts, but it is certainly all intriguing. We are left to wonder if nefarious thieves ever stalked the night with these gruesome hands, harnessing this black magic to rob and steal while the terrified populace cowered in their darkened homes wondering if they were to be the next victims. It is a curious historical oddity at the very least, and one wonders with it where the line between folklore and reality meet.

Nepal Battles With India Over Those Yeti Footprints