The Phantom Flying Dutchman and a Series of Bizarre Letters

Practically since humankind first took to the seas there have been tales of ghost ships. These phantom vessels glide over the waters of our world startling those who see them and spawning all manner of legends and tales, instilling awe and fear wherever they go. Some of these ghost ships have gone on to become persistent fixtures of lore, and often sit between the realm of the real and that of pure myth. One of the most notorious of these spectral ships has long been seen by sailors over the centuries, and which figures prominently in numerous sightings and strange accounts.

Perhaps most famous and indeed legendary phantom ships to ever supposedly sail the high seas is the one commonly known as the Flying Dutchman. Its tale hearkens back to the 17th century, in the midst of the heyday of the Dutch East India Company, when there began to appear reports of a mysterious ghost ship that often appeared in storms and which seemed to appear and disappear at will, often reported as glowing or being manned by a spectral crew. The ship was most commonly sighted off of South Africa’s Cape of Good Hope, faster than any known vessel, and accrued quite a sinister reputation as being endowed with various malevolent powers, such as the ability to cause storms or to maliciously curse whoever was to lay eyes upon it, its appearance a portent of doom, and it is said to be stuck in a limbo of eternally prowling the seas until the end of time. One early literary reference of the Flying Dutchman comes from A Voyage to Botany Bay (1795), in which Australian pioneer George Barrington writes:

I had often heard of the superstition of sailors respecting apparitions and doom, but had never given much credit to the report; it seems that some years since a Dutch man-of-war was lost off the Cape of Good Hope, and every soul on board perished; her consort weathered the gale, and arrived soon after at the Cape. Having refitted, and returning to Europe, they were assailed by a violent tempest nearly in the same latitude. In the night watch some of the people saw, or imagined they saw, a vessel standing for them under a press of sail, as though she would run them down: one in particular affirmed it was the ship that had foundered in the former gale, and that it must certainly be her, or the apparition of her; but on its clearing up, the object, a dark thick cloud, disappeared. Nothing could do away the idea of this phenomenon on the minds of the sailors; and, on their relating the circumstances when they arrived in port, the story spread like wild-fire, and the supposed phantom was called the Flying Dutchman. From the Dutch the English seamen got the infatuation, and there are very few Indiamen, but what has some one on board, who pretends to have seen the apparition.

The ship over the centuries became a legend, feared by mariners who saw it as a bad omen, and it has been sporadically sighted throughout the centuries all the way up into the present day, being sighted past the horizon of South Africa and as far away as Australia. Indeed, Prince George of Wales saw the Flying Dutchman in 1881 of the coast of Australia in the Bass Strait, saying of the encounter:

At 4 a.m. the Flying Dutchman crossed our bows. A strange red light as of a phantom ship all aglow, in the midst of which light the masts, spars and sails of a brig 200 yards distant stood out in strong relief as she came up on the port bow, where also the officer of the watch from the bridge clearly saw her, as did the quarterdeck midshipman, who was sent forward at once to the forecastle; but on arriving there was no vestige nor any sign whatever of any material ship was to be seen either near or right away to the horizon, the night being clear and the sea calm. Thirteen persons altogether saw her.

One very intriguing series of sightings was mentioned on the site Anomaly Info and comes to us from the September-October 1915 issue of the United States Naval Institute Proceedings, in which a John A. Mudd shared a packet of old family letters outlining a bizarre correspondence between a relative of his and a cousin who had been a lieutenant in the Navy off the African coast, and which covers a time frame from the 1840s to the 1860s. Buried within these letters is an interesting exchange between the two in 1842, which started with an alleged sighting of a ghost ship from the lieutenant's war brig that appeared out of a storm and sailed full speed ahead with its sails full against the wind.

Allegedly, two nights later the cousin’s ship was trapped in a raging lightning storm when the looming dark shape of a massive sailing vessel with no lights on aboard passed them in the night, seemingly impervious to the high winds and rough waves. It was briefly illuminated by a flash of lighting and then was gone. That very night the sailing master came down with a life-threatening fever, and babbled on about how they had seen the Flying Dutchman and were therefore doomed. A week after this the phantom vessel was seen again sailing some distance away in clear weather, but then there was a sudden storm that seemed to congeal only around it without touching the surrounding sea, and which “seemed to slap the strange thing off the face of the ocean,” after which it vanished even as the lieutenant watched it through a spy glass. He would mention that the windows of the mystery ship and front section seemed to have been “shot out,” and that a fog had followed in its wake. Interestingly, the letters go on to tell a tale from the ship’s purser, who claimed that his uncle had once encountered the Flying Dutchman and that it could be harmed with a cannonball made of silver. Indeed, he explained that his uncle had been aboard a frigate and actually fired at the phantom ship with such a cannonball, which had hit it precisely in the section where the lieutenant had seen the damage.

The correspondence continues with talk that the lieutenant’s ship had been beset with myriad misfortune, accidents, and mutinies over the years in the wake of these sightings, which the crew attributed to the Flying Dutchman. In fact, the ship reportedly was finally hit by a sudden burst of fearsome wind that blew in out of nowhere to capsize and sink it as it made its way through the Gulf of Mexico during the Mexican War, thus ending its days. Was this due to the curse of the Flying Dutchman? It is unfortunate that the actual name of this brig is never mentioned in the letters, although research done by Garth Haslam at Anomaly Info suggests that it may have been the USS Somers, which was a warship active around the coast of South Africa at the same time as the first letters in 1842, and is known for its mutiny and ultimate fate by capsizing.

Oddly, the letters were not mentioned by Mudd until 1915, many decades after the purported events, and this is a bit of an eerie story in itself, as Mudd would claim that he had seen something that had terrified him so badly that he felt he could not show this account to the world until years later. According to Mudd, when he had first received the letters he had spent the whole day reading them before going back to his own duties as a midshipman aboard a Naval vessel. They had been off the west coast of Central America in calm seas at the time, and later on that evening as he was looking at some lightning flickering off in the distance he noticed another ship that seemed to be headed directly towards them on a collision course, oddly completely silent and with full sails despite a complete lack of any wind. 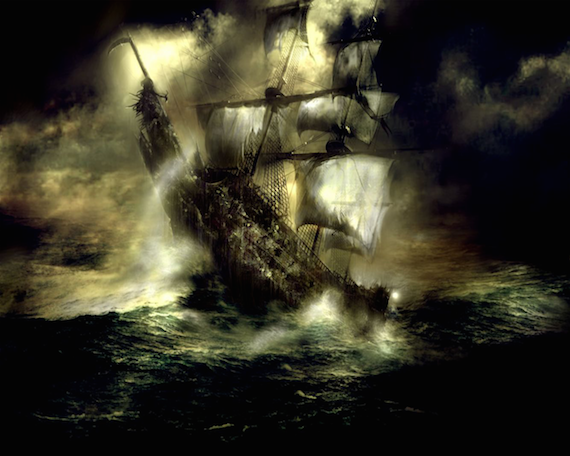 As he braced for impact, a lighting bolt reportedly struck the mysterious ship and it vanished into thin air. Spookily, in that brief moment of light he had noticed that the front portion of the mystery ship had been shot out, just had been described by the lieutenant in the letters he had just read not long before. He had also been able to see the cabin lit up, within which sat a man dressed in old-fashioned clothes of another era and a monstrous and demonic looking “massive, slippery thing” that was not human. So unsettling had this sight been that he had been unable to even fully describe the abomination that he had seen, and it had left him in a state of frightened shock.

He would soon learn that no one else aboard had seen the ship at all, and just as he was beginning to think that he was just tired and seeing things he saw the ship yet again about a half an hour later. This time, some other crew members saw it too, only for it to once again vanish in a bolt of lightning. Not long after this an unearthly shriek was heard emanating from the darkness across the waves and a man mysteriously fell overboard. It was this odd coincidence of seeing it after reading the letters that would supposedly keep Mudd from releasing them, convinced as he was that he was being stalked by the very same mystery ship, perhaps somehow drawn to him because he had seen them. Was this just his imagination, exacerbated by tiredness and molded by the letters he had just read? Was it just a spooky story he had made up to make the letters seem more mysterious? Or was the malignant Flying Dutchman actually stalking him? We will probably never know for sure, or to what degree Mudd’s own account or that which is outlined in those letters ever really happened, or indeed if the Flying Dutchman ever existed in any capacity, but it is certainly a rather bizarre story and historical oddity all the same. For now the Flying Dutchman at least cruises the waters of the human mind and legend, and may even be out there waiting for its next victim.